Since Modi and his team expect to win the 2019 elections, the groundwork for improved performance in their second term should be done now, says T N Ninan. 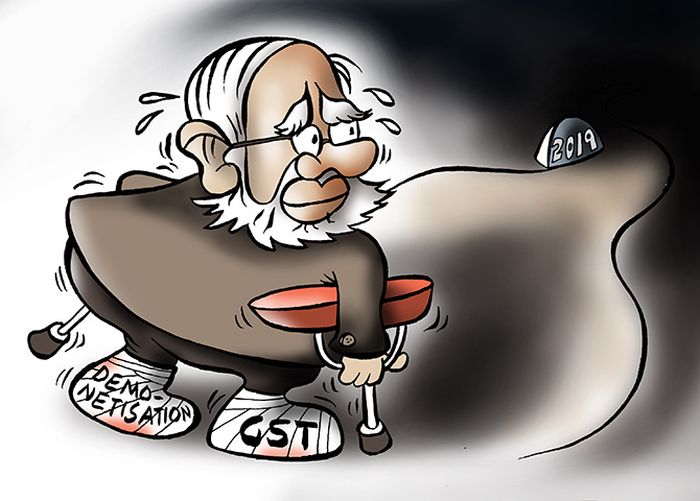 But the Manmohan Singh government was beguiled by flattering growth rates into doing little on some basic issues, taking the wrong turn on some others, and getting paralysed into inaction in the wake of sundry scandals.

In turn, the Narendra Modi government has simply not been interested in spending political capital to undertake difficult reforms.

Both governments can claim specific programmes that have done some good, but systemic change was not attempted until quite recently. The price is being paid now, in the form of dipping growth rates.

The government's spokesmen -- and the prime minister himself -- like to talk about having brought about transformative reform.

The alternative view, put out by The Economist, describes Narendra Modi as a 'tinkerer'.

Since no transformation is in evidence, the critical view may be more accurate. It therefore becomes necessary to spell out the key reform that has not been attempted.

The mantra of making markets work better when it comes to the factors of production (capital, land and labour) is all too familiar to bear repetition; but the continuing pain caused by government-owned banks does serve as a reminder.

Equally important reform measures lie outside the sphere of hardcore economics -- like judicial reform. Delays in courts make it difficult to enforce contracts -- and this is a factor in the World Bank’s rankings on ease of doing business.

Other badly-needed reforms have to do with public health and the quality of school education.

Most of India's politicians may not be aware that the East Asian success story began with sharp improvements in the quality of human capital -- achieved by South Korea, Taiwan, and China itself.

India's continuing failure on this front is all too glaring -- and bear in mind that there are no ideological barriers to action here.

The second constraining issue has to do with the old bugbear of project execution -- precisely the area where Modi was supposed to make a difference.

But the skills programme, started by one government and re-formatted by the next, is still in tatters.

Make in India has made no noticeable difference. One doesn't hear anymore about the Delhi-Mumbai Industrial Corridor even as its showpiece -- the town of Dholera -- seems to have got bogged down in the familiar problem of land acquisition.

Both demonetisation and the introduction of the goods and services tax have suffered from botched execution. It is not hard to add to this list.

With the medium-term groundwork not having been done, and programme execution falling short, the government is looking at short-term measures like bumping up spending to make up for slack private investment.

This might work if it serves to create demand and boost private sector activity.

After all, fiscal policy is supposed to be counter-cyclical; persisting with fiscal contraction during a slowdown is not the smartest stance to adopt.

But an expansionary fiscal stance brings with it the risk of the Reserve Bank of India becoming leery about inflation and therefore adopting less than accommodative monetary policy; should interest rates go in the wrong direction, they will crowd out private sector activity and the economy will be in no better shape than before.

The fact is that short-term crisis solutions create distortions, and are not a substitute for foundational work.

Since Modi and his team expect to win the 2019 elections, the groundwork for improved performance in their second term should be done now.

In other words, go beyond whatever short-term measures are in the works, and tackle the underlying issues that hold India back.