The question is whether Prime Minister Modi can convince the world’s investors that India is the ultimate investment destination of 2018, says Kanika Datta. There was some degree of inevitability in Prime Minister Narendra Modi’s plan to visit the World Economic Forum in Davos, Switzerland, from January 22.

Public memory is short, but Mr Modi’s early days as prime minister stood out for the frequency of his foreign travels.

So an appearance at the world’s most famous talking shop had to be on his agenda before the 2019 elections.

The question is, whether he can convince the world’s investors that India is the ultimate investment destination of 2018.

Foreign investment-gathering visits, whether by state chief ministers or a prime minister -- and we are reminded that H D Deve Gowda was the last prime minister to visit this annual jamboree in 1997 -- tend to yield mixed results.

You have the PM or the chief minister, as the case may be, extolling the virtues of his/her country/state.

Some of this evinces hesitant interest. A fraction of this materialises into hard investment on the ground; most melt away in the face of the hard realities of India’s quirky business environment.

Davos is a better destination than most for this sort of thing because, beyond the speechifying, flesh-pressing and partying, it is frequented by hard-nosed business people looking for deals.

So if there is foreign direct investment to be had, it is here.

That being so, the composition of the ministerial delegation accompanying Mr Modi is decidedly strange.

As for junior foreign minister M J Akbar and Minister of State for Development of Northeastern Region Jitendra Singh, their inclusion is mystifying.

Why do we need a junior foreign minister at Davos when there is a reasonably capable ambassador in Geneva?

And which foreign investor will put his money in the tumultuous Northeast where even Indian businessmen fear to tread?

These are not factors to be taken lightly.

Both P V Narasimha Rao (1994) and Deve Gowda (1997) put in underwhelming performances at Davos in an era when India was the toast of the investment community, or so the ebullient WEF executive chairman Klaus Schwab would have us believe at the time.

In spite of his huge reputation as a bold domestic reformer, Narasimha Rao waffled on about nothing much rather than hard-selling his policy changes to the galaxy of disappointed foreign businessmen.

As for Deve Gowda, the prime minister from whom nothing much was expected anyway, Davos was transparently a junket.

A large family contingent accompanied him and his presence was barely noticed.

Perhaps he was prescient in not asserting himself since the Asian currency crisis began seven months later, putting all global investment plans in cold storage for almost half a decade.

Modi’s attendance will not be from a position of great strength.

The Indian economy has slowed precipitately under his watch principally because of policies he introduced.

True, Moody’s upgraded India’s sovereign rating for reasons that puzzle many serious economists and India jack-knifed up the World Bank’s global Ease of Doing Business rankings, points that do not change experiences on the ground.

But if India has attracted world attention these past three years, it is emphatically not for its economic performance, as former US president Barack Obama bluntly reminded us.

Indeed, the campaigns of gau rakshak, love jihad and caste atrocities that have polarised the country like never before sit oddly with the theme for this year’s meeting: “Creating a shared future in a fractured world.”

Much is being made of the possibilities of sideline meetings between Modi and Donald Trump or Xi Jinping.

Recent history raises little hope about the efficacy of his personal diplomacy.

Schmoozing with Obama resulted in India’s risky capitulation at the Paris climate change deal; Xi may have shared an ornate jhoola with Modi in Ahmedabad but that doesn’t stop him encroaching all over our northern borders in the interests of his belt and road initiative.

As for Trump, he’s interested in India only as a possible buyer of American defence products (he must be unaware of our fiendishly complex purchase process).

So in true Narendra Modi style this will be the “largest ever” delegation that will attend Davos from India.

Whether the takeaways will be as large remains, as always, an open question. 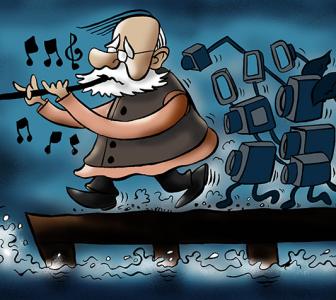