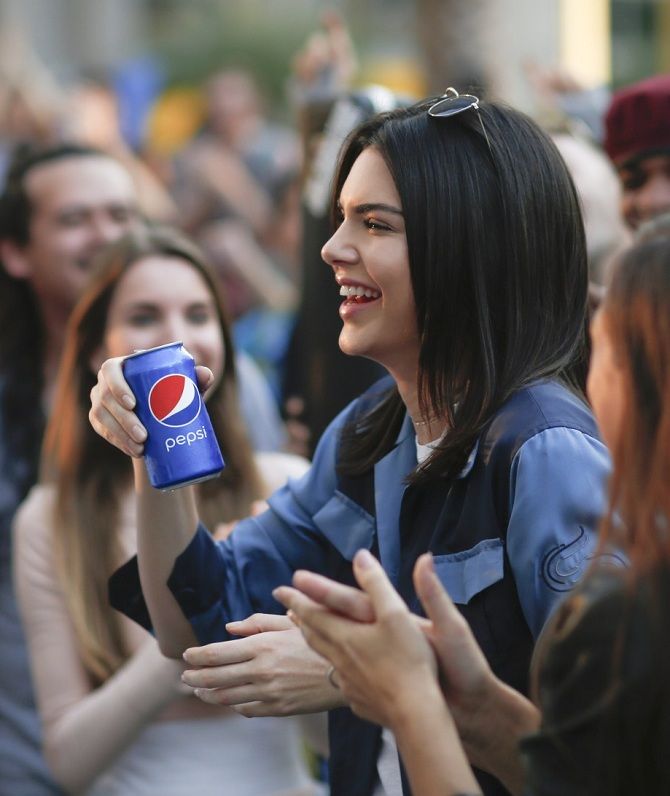 IMAGE: The Pepsi ad, which has now been pulled, attracted deserved uproar with people variously dubbing it "tone-deaf", "racist" and "simplistic".

Unlike Pepsi's Kendall Jenner ad, Tata Tea's Jaago Re campaigns were careful not to insert its product in the ad's storyline and they targeted topics on which there was near unanimity of outrage, says Vikram Johri.

Pepsi found itself in the eye of the storm when it released an advertisement featuring model Kendall Jenner that seemed to speak to the protests against Donald Trump, which galvanised America after he was sworn in as President.

In the ad, Jenner is shown modelling for a product, when she spots a crowd chanting in the streets. The crowd is suitably diverse, comprising a Japanese-American musician, a hijab-wearing Muslim woman as well as black and transgender folks. They are moving towards a barricade whose heavy police presence is reminiscent of the "Black Lives Matter" protests that tore through the country last year.

Jenner is shown ripping out her fake wig and smudging her makeup as she joins the march in an inspired moment.

She then grabs a Pepsi and hands it to a cop as a peace offering. The mood suddenly turns celebratory and the words "Live Bolder; Live Louder" are splashed across the screen.

The ad has attracted deserved uproar on the internet, with people variously dubbing it "tone-deaf", "racist" and "simplistic". Indeed, to imagine that deep social fissures can be smoothed over by sharing fizzy drinks, even in an ad, takes a level of ignorance that one would imagine Pepsi's marketing department was exempt from.

What is worse, the ad assumes a certain disregard for the culture of consumerism -- the triumphant look on Jenner's face, say, when she gives up her stilettos to join the march -- that is at odds with the product it is selling. If there is one pervasive symbol, apart from the ubiquitous golden arch, of the excessive reach of American consumerism, it is Pepsi and the other cola brands.

IMAGE: In the ad, left, Kendall Jenner and a suitably diverse crowd move towards a police barricade reminiscent of the Black Lives Matter protests, right, that have torn through the US.

For all that, though, some of the reactions to the ad signalled how entrenched Americans' political positions have become in the age of Trump.

The divide is not just between the traditional Left and Right. It is also about small details and nuance, commodities in short supply when passions rage.

During the Women's March that coincided with Trump's inauguration, for example, some commentators took issue with the marchers' glorification of the hijab as a mark of support to Muslim immigrants, a group Trump was targeting. These commentators reiterated how the hijab is a symbol of patriarchy and repression in Muslim societies, and the inability of the marchers to distil this fact from supporting the cause of immigration was as problematic as the blanket ban on immigrants.

Likewise, the Black Lives Matter movement has been criticised by some for its divisive nature, particularly for stoking hatred against the police force. 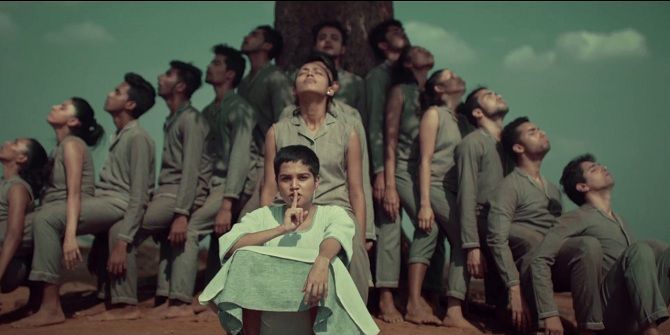 IMAGE: Tata Tea has been running the "Jaago Re" campaign that regularly reflects on issues churning society at large.

Social advertising is never an easy path to traverse.

It often drowns in its inherent irony -- the commercial nature of the ad versus the purportedly lofty ideals it espouses.

Yet, the Pepsi ad, by trying to advocate the building of bridges, was ultimately striving for something essentially good and worth celebrating. The cola-as-medium may have been a bit too much, but the ad had its heart in the right place.

In India, Tata Tea has been running the "Jaago Re" campaign that regularly reflects on issues churning society at large.

Its latest ad pokes fun at the army of social media activists who spring up in the aftermath of an atrocity. Showcasing a group of men and women simulating sleep, the ad punctures the self-congratulatory complacence that has come to define our collective social media presence.

Nitpickers might challenge the slick association between "waking up" and the popular perception of tea as a laziness killer. Yet, unlike Pepsi, Tata Tea was careful not to insert its product in the storyline of the ad. Its logo appears only in the end, after the rousing message of the ad has been delivered.

There is another, important difference. The level of divisiveness around the issue is not the same.

Reading the comments on the Pepsi ad, it was hard to shake the feeling that some people felt as though the cola giant had trivialised a cherished ideal. That ad touched upon something that a lot of Americans, especially the young, not just deeply connect with, but, more importantly, tie up their politics with.

Little wonder their reaction was so visceral.

Tata Tea's campaigns, on the other hand, target social evils like rape -- topics on which there is near unanimity of outrage, eliminating the possibility of causing offence. As with its earlier campaigns against corruption and government accountability, the latest ad touched upon an issue that speaks to a large number of Indians, regardless of political affiliations.

For its next ad, therefore, Pepsi should tackle a theme that is less politically charged.

Have environmentalists and coal burners bond over Pepsi as they sign memoranda pledging to shift to renewable energy.

Now that's an idea with legs.