'The only way to minimise logical inconsistencies and confusion is to develop the two rates of 12% and 18% as the ones that apply to almost all items.'
'At a later stage, these two rates could be merged into a single rate,' advises T N Ninan. 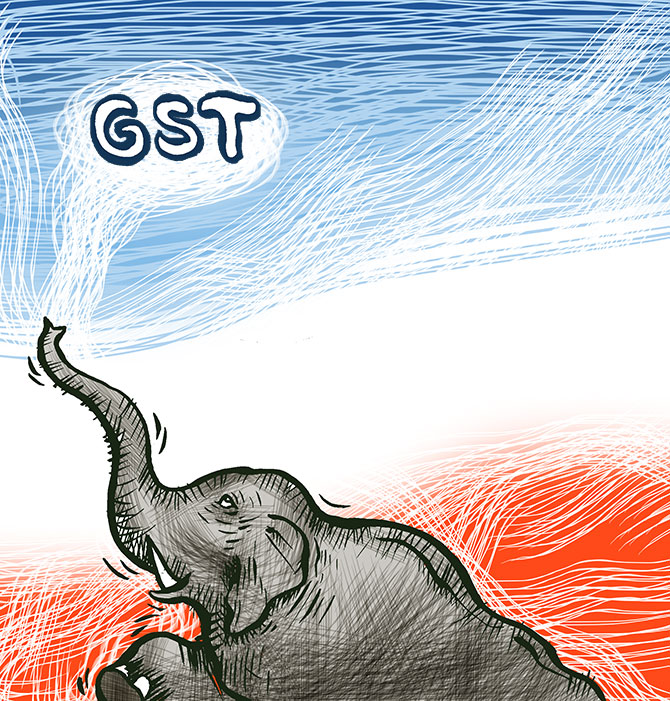 The Goods and Services Tax Council has done what it should have done five months ago: Reduce drastically the number of items in the 28 per cent tax category.

There was no shortage of protests when the bloated top tax rate list was first announced, but everyone in the government chose to turn a deaf ear to the lamentations of a GST rate so high that it should not have existed in the first place -- and does not exist in almost any country which has a value-added tax system.

Now that the number of items to attract this tax rate has been reduced to 50, and a huge number of items of daily consumption have been moved to lower tax slabs, the whole thing becomes a more reasonable proposition.

And one could argue that five months was not too long a wait for good sense to dawn. It is just as well that the council has not waited for the introductory phase to pass before addressing the issue.

The job is only half done. The steady expansion of the 5 per cent list is to move in the wrong direction.

This category, like the 28 per cent slab, should be an outlier -- and include only exceptional items.

Some of the goods that attract 5 per cent tax could easily be moved up into the 12 per cent category, like sugar, whose demand comes mostly from the manufacturers of soft drinks and Indian sweets.

Indeed, other ingredients for making Indian sweets, like butter and ghee, attract 12 per cent, as does processed food in general.

Even now, the inconsistencies linger.

There is no logical reason why cement should be in the 28 per cent category while concrete attracts 18 per cent.

Steel, also used in construction, has been at 18 per cent, as also wood. But plywood has been at 28 per cent while its substitute particle board is at 12 per cent.

For good measure, a 'water vessel' (or ship) on time charter attracts 18 per cent, but leased transport equipment attracts only 5 per cent.

The issue goes beyond nit-picking over specific items, and extends to the basic idea of what makes for an effective GST system.

When the idea of a GST was introduced, no one had intended (or dreamt) that there would be four rates of tax other than the zero rate. But these rates are now a fact of life.

So the only way to minimise logical inconsistencies, lobbying for classification changes, and confusion about the applicable rates is to develop the two middle rates of 12 per cent and 18 per cent as the ones that apply to almost all items.

Having two main rates would help to get away from much (though not all) of the illogicality, confusion, and potential for disputes.

It would also make set-offs simpler because inputs and output would generally attract the same rate, and add clarity to the system.

At a later stage, these two middle rates could be merged into a single modal rate, as the finance minister has half-indicated.

If this final step is taken, the GST will become the promised 'good and simple tax'.

There is the larger issue of the utility or practicability of very progressive tax rates.

Extreme progressivity has already been abandoned on the direct tax side, yielding higher income tax revenue in relation to GDP. It now needs to be moderated on the indirect tax front as well.

The operating reality, which the government and politicians must recognise, is that it is futile to try and address inequality through the tax system; it doesn't work beyond a limited extent, as India's own experience has shown.

Far better to deal with inequality through the expenditure side of the Budget, with the provision of a social safety net for the poor, as the advanced social democracies do, and design tax rates for simplicity and effectiveness.