News
Business
Movies
Sports
Cricket
Get Ahead
Money Tips
Shopping
Sign in  |  Create a Rediffmail account
Rediff.com  » Business » Why the city gas distribution is in a mess

Why the city gas distribution is in a mess

Seldom have the ironies been as bizarre as in the case of city gas distribution (CGD) in the country. Long established CGD companies authorised by the government - and in some cases owned by it - have been at the receiving end of the regulator's wrath while illegal entities have been allowed to continue with their squatting operations.

Instead of the network expanding in a significant way, no new projects have come up in the last two years; on the other hand, expansion of existing projects was brought to a standstill for long periods although authorisations are now being accepted in some cases. This has been the paradox of regulation of the downstream gas sector.

With the courts entering the picture, the prospects of expanding the CGD network in the near future appear rather remote.

This is because the functioning of the Petroleum and Natural Gas Regulatory Board (PNGRB) and its powers to license CGD companies has been challenged twice over - in a public interest litigation filed by a voluntary organisation and in a writ petition filed by a Supreme Court-mandated company. Both cases have been clubbed together by the Delhi High Court which is hearing the cases but the outcome seems a foregone conclusion since the government has admitted to the court that the regulator does not, indeed, have the power to issue any CGD authorisation!

The supreme irony is that the key Section 16 of the PNGRB Act of 2006 that gives it powers of authorisation has not been notified so far.

How did things go so wrong on CGD? According to some analysts, the mess is entirely the making of the board which took a pugnacious stand on existing CGD entities - these include municipalities in Gujarat, public sector undertakings, joint ventures and private companies - some of which have been in operation for several decades.

Almost from the word go, the five-member PNGRB, set up in October 2007, had expended much of its energies last year in questioning the authorisation given by the government to the handful of existing entities, specially the Delhi-based Indraprastha Gas Ltd (IGL). This not only delayed the expansion of CGD network but also stymied expansion of operations in the National Capital Region (NCR) where a critical Supreme Court's directive to supply clean fuel to automobiles in the heavily polluted zone has been put on hold because of its injunctions against IGL.

The NCR imbroglio is a telling example of the PNGRB's approach to CGD authorisation. IGL was set up in 1998 as a joint venture of the state-owned GAIL India, the public sector BPCL and the government of Delhi under a Supreme Court directive to clean up the heavily polluted NCR.

This did not cut any ice with board which refused to let IGL proceed with expansion in Delhi initially and later in the NCR. Matters came to a head when the board included Ghaziabad, which forms part of NCR, in the list of seven cities put up for CGD bids in its second tranche.

The insistence of board - sources say it was the decision of the chairman - to put Ghaziabad to bid when IGL's application for authorisation was pending with the PNGRB was all of a piece with its way of functioning.

As industry saw it, IGL's application was a mere formality since it had been working in Ghaziabad since 2002 and had already invested Rs 12 crore (Rs 120 million)  in the city for setting up two CNG stations and related infrastructure. The clincher in this case is that IGL has been working under the direction of the Environment Pollution Control Authority (EPCA) which reports to the apex court on pollution mitigation measures undertaken in the NCR and is in the process of laying pipelines and setting up another CNG station. A listed company, IGL is scheduled to spend Rs 76 crore (Rs 760 million)  this financial year and has drawn up plans for investment of Rs 300 crore (Rs 3 billion) over the next three years.

An outraged IGL has pointed out in its writ petition that the bid for Ghaziabad was called for even while the PNGRB was hearing its application for authorisation as the incumbent operator.

Those familiar with the travails of setting up CGD networks point out that the board has shown little understanding of the problems of establishing such a business where getting land and a multitude of required local clearances take several years.

The importance of Ghaziabad is that it is far by the most promising location as responses to the PNGRB tender have revealed. It is a highly industrialised hub and investors expect to make handsome gains from supplying the industrial and commercial segment rather than from supplying domestic consumers or providing CNG for automobiles.

So say industry insiders who point out that the board does not regulate marketing margins, leaving the investors free to charge their own rates. According to some credit rating agencies, the rate of return on capital employed can be as high as 20 per cent if companies leverage their financing ratios astutely. This would explain the scramble for Ghaziabad which has the largest number of contenders, including big oil companies (IOC and HPCL) and the omnipresent GAIL Gas which bids for all cities except those which Reliance Gas, a subsidiary of Reliance Industries, is angling for.

The surprise in the pack is Siti Energy, a little known outfit part-owned by a company floated by the Zee TV group. Siti's bid is interesting primarily because it throws light on the functioning of the board. Although the company has shown assets of just Rs 2 crore (Rs 20 million) against the stipulated net worth of Rs 150 crore for Ghaziabad bidders, some members of the board, it is learned, were keen to qualify the company ''in the interests of fostering competition".

The company is seeking to include family jewellery and other assets like stocks to boost its net worth. However, strenuous objections from one of the members have forced the board to seek a legal opinion on the matter.

Ghaziabad is just one example of how the board's handling of CGD projects is leading to problems all round. In June, the EPCA chairman Bhure Lal had written to Oil and Gas Minister Murli Deora warning that the regulator's move would lead to more delays and jeopardise the work of pollution control in the NCR where a phenomenal 1.2 million vehicles ply daily.

The letter had prompted Deora to ask the board to draw up a clear road map for rolling out CGD projects in a big way, specially since gas supplies are expected to be plentiful in coming months.

PNGRB's target for setting up a CGD network across the country has been as ambitious as it has been elusive. A schedule unveiled last December had set a target of covering 86 towns and cities with a population of 100 million by 2011.

So far, letters of intent have been issued for just six cities tendered in the first tranche, leaving the CGD map woefully sparse: India has just a dozen odd urban centres that have been in the CGD network for decades compared with well over a 1,000 in Pakistan.

The picture is unlikely to improve soon because of the legal tangle. Whatever the Delhi High Court decides, it is time the regulator took a look at its record on expanding the CGD network and cleared the blockages, specially attitudinal. 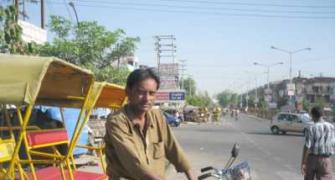 8 in race for city gas distribution