There is as yet no clarity on how the process of consulting with the RBI Governor, initiated under Section 7 of the RBI Act, would unfold in the coming days. The government is keen that its suggestions made in the public interest should be heeded by the central bank, says A K Bhattacharya. 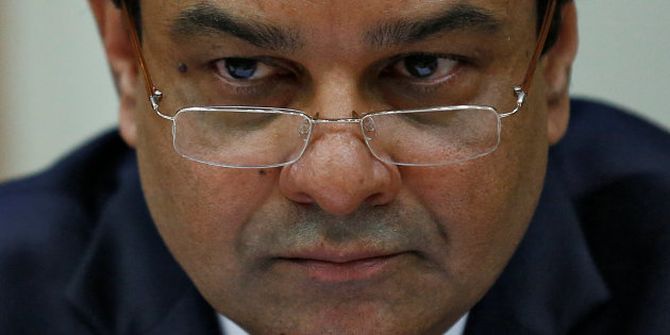 The forthcoming meeting of the central board of the Reserve Bank of India (RBI), scheduled for November 19, is likely to be no less stormy than the one that was held in Mumbai on October 23, which was soon followed by a series of developments that brought to the fore differences between the central bank and the Union finance ministry.

Government nominees on the board of the RBI will be making a presentation on why the central bank should consider accepting all the suggestions made by the finance ministry in its communication to RBI Governor Urjit Patel on October 10.

That communication had used the provisions of consultation with the RBI Governor under Section 7 of the RBI Act.

These suggestions include doing away with the requirement on exposure limit of 20 per cent of the foreign portfolio investments in corporate bond portfolios of a single corporate group, removing the requirements of mandatory hedging for infrastructure loans of less than 10 years’ maturity, setting up a special refinance window for non-banking finance companies, housing finance companies and mutual funds, creating a facility for banks to raise $30 billion, and a review of the economic capital framework for bringing it in line with the requirements of the RBI Act.

Sources aware of these developments told Business Standard that the RBI Governor’s reply received earlier showed that the central bank did not see eye to eye on most of these proposals.

Hence, one of the finance ministry nominees on the board of the RBI would make a detailed presentation on November 19 to impress upon the Governor, his team, and the entire board the need to consider the government’s suggestions favourably.

Another issue likely to come up at the forthcoming board meeting is RBI Deputy Governor Viral Acharya’s hard-hitting speech on October 26, where he warned that there would be adverse consequences when governments did not honour the independence of the central bank.

Questions over the propriety and correctness of such a speech would be raised by government nominees on the board.

The RBI board meeting on October 23 had seen a presentation from the financial services department’s secretary, who is also on the board, on why the RBI Governor should consider accepting about half a dozen other suggestions made to him in another communication and using consultation provisions under Section 7 of the RBI Act.

That meeting was one of the longest in recent times and ended inconclusively.

The suggestions made in that communication, sent also during the first half of October, pertained to the application of Basel III norms to banks that are not internationally active, building up a capital conservation buffer during periods of stress, the need for keeping the RBI capital adequacy norms at 1 per cent higher than Basel III norms, the efficacy of the framework for prompt corrective action for banks in restoring banks to health, the need for high-risk weights for credit to micro, small and medium enterprises (MSMEs), and enhancement of opportunities for rectification and restructuring of MSMEs’ loan accounts.

Within three days of the RBI board meeting, Acharya delivered the A D Shroff Memorial lecture, underlining the need for preserving the central bank’s independence.

Even as there was speculation that the tension might escalate, the finance ministry on October 31 put out a statement that was aimed at bringing down the temperature.

The statement reiterated that the government considered the autonomy for the central bank within the framework of the RBI Act an essential and accepted governance requirement.

More importantly, it said that the government has nurtured and respected this basic principle.

It is still not clear if the temperature has actually come down.

On November 2, the Economic Affairs Secretary, Subhash Chandra Garg, made a statement on social media, raising questions over Acharya’s warning of the markets punishing governments that don’t honour the central bank’s independence.

Garg’s tweet said: “Rupee trading at less than 73 to a dollar, Brent crude below $73 a barrel, markets up by over 4% during the week and bond yields below 7.8 per cent. Wrath of the markets?”

By the same evening, the RBI had put up on its website a speech delivered by its Deputy Governor, N S Vishwanathan, a few days ago on October 29.

Vishwanathan questioned the need for treating a defaulter differently just because it may have faced some special external circumstances.

Observers noted that Vishwanathan’s speech was put up on the RBI website only on November 2, and not on October 29 when the speech was delivered.

Acharya’s speech was delivered on October 26 and put up on its website on the same day.

There is as yet no clarity on how the process of consulting with the RBI Governor, initiated under Section 7 of the RBI Act, would unfold in the coming days.

The government is keen that its suggestions made in the public interest should be heeded by the central bank.

Whether that is ensured by issuing a directive or convincing the RBI will be known in the next few weeks.

Under Section 7 of the RBI Act, the Union government may, after consultation with the RBI Governor, give such directions to the central bank as may be necessary in the public interest.

Section 7 also provides that subject to any such directions, the general superintendence and direction of the affairs and business of the Bank can be entrusted to a central board of directors which may exercise all powers and do all acts and things which may be exercised or done by the Bank.