Over the years India’s governments have turned several public goods into private ones, says T C A Srinivasa-Raghavan. 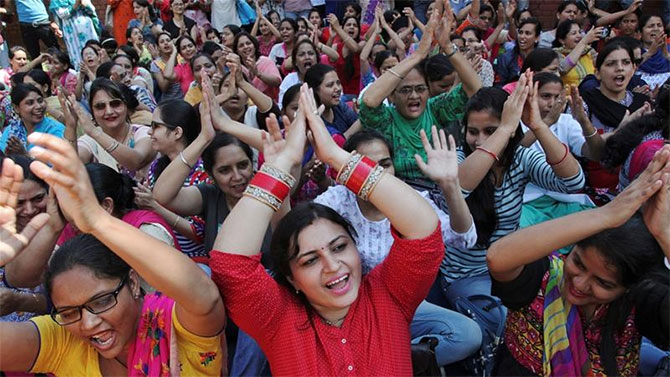 A friend of mine is appalled that the Modi government has asked private restaurants to allow people to use their loos for a nominal charge of Rs 5. I can quite understand her annoyance.

Once, when she was pregnant, a shop in London had refused to let her use its bathrooms. This is a private property, she had been told by a female employee, whereupon my friend had growled “do your worst”, and gone on to use the facilities.

What, pray, is the government doing with the taxes it collects? Surely after paying its indolent and corrupt employees there is a lakh or two left over to build more public toilets?

Last July I was placed in exactly the same predicament. I had arrived in Bangalore on the day of the Great Rain, when lakes had overflowed and roads had become rivers.

I spent seven hours in the car and, to misquote Tennyson, there were cars to the right of us, cars to the left of us, crawling and spurting; ours was not to reason why, ours was to crawl and maybe die; boldly we rode in the belly of hell.

Eventually, we came upon a restaurant and requested the favour. The manager took one look at my face and asked the waiter to show us the loo.

I am sure all of you have had a similar experience at some time or the other. And all of you when in extremis would have wondered why there aren’t more public loos in India, which the country’s population warrants.

Eventually, folks, it all boils down to that dreadful thing: Economics. By its laws, the most useful things socially command the least value in the market. In that sense, there is no difference between sweepers, teachers, and toilets; or, for that matter, journalists.

Barring Germany, where possibly because beer consumption is so high, I have not seen a single country where public loos are plentiful.

Equally, however, I have not seen a single country which makes it mandatory for private loos to be used as public ones by itinerant bladders.

Faced with this reality and helped along by God’s own disinfectant, bountiful sunshine, we Indians are used to taking our chances in the open. But it isn’t a pretty sight, whence, doubtless, the government decree.

But then it is not just in the matter of loos that our governments have failed. Schools are predominantly private now. So are health care arrangements. So is security. So is drinking-water. So is clean air.

But that begs two rather more serious questions: Whither sanctity of private property and what, pray, is the government doing with the taxes it collects? Surely after paying its indolent and corrupt employees there is a lakh or two left over to build more public toilets?

I asked a friend of mine who has retired from the IAS and run municipalities to explain forthwith. He said it had something to do with the system of plan and non-plan expenditure.

He said as a young district magistrate he had ordered six public toilets to be built and even cut the ribbon on them, only to find people - men, actually - were doing it outside. When challenged, they said they were using the loo, so what if it was outside?

The real problem was that the loos were dirty. My friend did not have the powers to recruit agencies that clean. Thus, a good idea turned to nought.

Not just loos, though

But then it is not just in the matter of loos that our governments have failed. Schools are predominantly private now. So are health care arrangements. So is security. So is drinking-water. So is clean air. So, god be praised, is justice in many cases.

In what is a total abdication of responsibility, our governments have now shifted the onus to citizens. So when air pollution reaches Gothic proportions in Delhi Mr Kejriwal doesn’t take tedious and politically unpopular steps.

Instead he just introduces the odd-even scheme and you and I scurry about, making our own travel arrangements. No attempt has been made to increase the bus fleet during that time, either.

And why trouble the police to check for drunken drivers regularly on the roads? Just ban the sale of alcohol on highways, as though a person can’t get drunk beyond the 500th metre.

You can add to these examples but the point is clear: Over the years the state has turned many public goods that are financed by taxes into private goods.

Whence the question: What in heaven’s name is happening to the taxes we pay?