News
Business
Movies
Sports
Cricket
Get Ahead
Money Tips
Shopping
Sign in  |  Create a Rediffmail account
Rediff.com  » Business » Is India growing? No, development has not reached all corners

Is India growing? No, development has not reached all corners

India is the third largest economy in purchasing parity terms, it is also home to the world's largest numbers of poor, illiterate, sick and hungry people, notes Shreekant Sambrani. 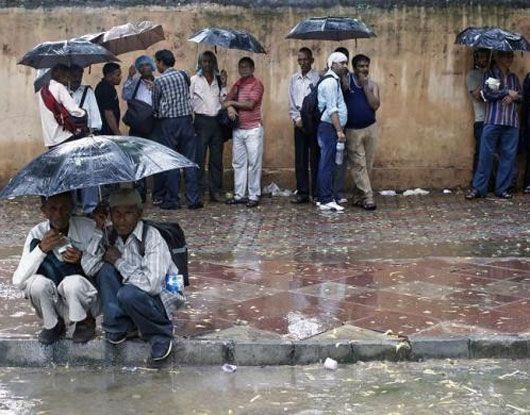 The Idea of India has withstood yet another challenge.

The Talking Heads have been tying themselves in knots reading the tea leaves of the electronic voting machines, but they are as one in their averment: The People Have Spoken, and of course, Wisely! So the Bihari Vikas Purush gets a third term to further that state's development, as he has been doing for the last decade. Bihar must have done well during his tenure.

A columnist noted shortly before the elections were announced: "The last decade has not seen a single new power station come up (virtually all the power that is consumed comes from other states), nor a single large industrial facility… Bihar's per capita income is a third of India's…Some districts …have per capita income that is a third of Bihar's…Siwan, said to be agriculturally prosperous, has per capita income that is barely a tenth of the national average…[It] also has 1,700 people per square km - more than four times national population density, and 35 times global density.

As television commentator Ravish Kumar convincingly remarked, caste continues to matter in Bihar, since even the aspirational Bihari has grown up there and not descended from Mars. Funny thing is, the losing side also said its sole plank was development.

Its leader, another Vikas Purush, albeit a Bahari one, has spared no effort to promote India, making it the preferred destination for investment.

A friend, an engineer's engineer with a distinguished track record in the United States, spent over a year to persuade a leading Japanese technology firm which successfully monitored and repaired stressed railway bridges, to form a joint venture to do the same in India (we have thousands of such bridges).

After countless presentations up and down the railway establishment in the last year, he remembered Sharu Ranganekar's observation in the Harvard Business Review more than 30 years ago that the art of decision making in India was to appear very busy making decisions even while not making them.

My friend was resigned to joining the group of NRIs who have lost money and withdrawn from India. But India has improved its ranking on doing business.

It now stands at 130 globally, four whole notches higher since the new dispensation at the centre.

The suit-boots of industry and eminence grise of the media have lost no time in urging the powers-that-be to now focus on the economy.

Is it not true that India today is the third largest economy in purchasing parity terms (seventh in current nominal dollars), it is also home to the world's largest numbers of poor, illiterate, sick and hungry people, malnourished and underweight children and pregnant and lactating women?

And has suffered steady loss of exports for almost a year now with its volume of manufactured goods exported being about the same as that of Taiwan, a country barely two per cent of the size of India?

That concern will of course be heeded. Development must reach all corners of the country.

Come summer, it must be taken to Assam. Rallies must be addressed, packages must be announced. A clarion call for 64+ in Assam is already sounded (no matter that 44+ in J&K actually became 25).

And then to Kerala. And on to West Bengal, and Uttar Pradesh... The Mumbai Municipal Corporation waits in the wings, and who knows, even the Jhumri Telaiya nagar palika! Bills and other economic agenda now stuck in the legislative logjam will be dealt with as and when time permits.

This column had made a plea for fixed terms for legislatures including the Lok Sabha and holding elections together for the whole country. We would then face elections with all their costs and disruptions only once in five years. Legislators and governments will not be looking over their shoulders at all times and thus be able to address concerns other than the purely short term ones as they do at present.

Of course, that will not come to pass, and not merely because the Representation of People Act is difficult to change.

All our political parties and politicians of all stripes are Keynesians at heart.

Didn't the great economist say "In the long run, we are all dead?" And so Jesus Christ's Sermon on the Mount "Sufficient unto the day is the evil thereof" has great significance for them - live in the present, the God of elections will take care of tomorrow. And so they live from election to election, win or lose, voters being capricious in their choice and providing baffling results, all that is their business as usual.

Postscript: Some gratuitous advice to 24x7 news channels and their pundits: keep your eyes on ETV before rushing to judgments.

For the last three years, this channel has consistently caught the right trend from the emerging results well before any other.

On Sunday last, it was projecting the Janata Dal (United) alliance ahead at 9 am, when all others were counting how many more seats the National Democratic Alliance needed to win.