The basic wisdom of economics is that not compromising is costly. If Narendra Modi doesn't heed this lesson, he risks running an administration that is ineffective at best and disastrous at worst, notes Vivek Oberoi. 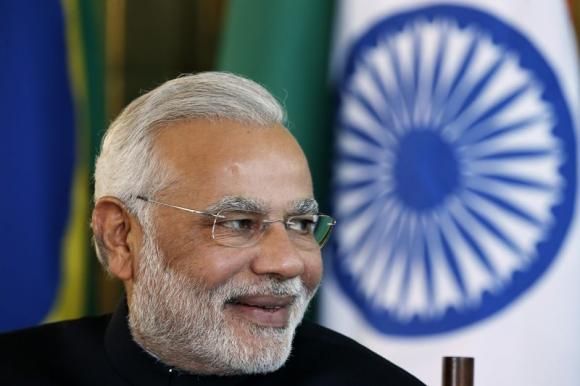 Image: Prime Minister Narendra Modi believes that India is held back because of a deficit in national character, in a common purpose and in a collective will. Photograph: Ueslei Marcelino/Reuters

I was reading Robert Fogel's paper on American railroads when my thoughts drifted to the Amartya Sen-Jagadish Bhagwati spat last year and then, inevitably, to Narendra Modi.

Robert Fogel famously measured the marginal benefit of railroads to the American economy.

The question relevant to economics was to compare the incremental contribution of railroads to other forms of transportation such as canals.

Fogel's answer was that railroads-one of the most disruptive technologies in history-had made a difference of less than 3 per cent to the largely agricultural US economy in 1890! Marginal analysis, a key contribution of economics to human thought, is rooted in reason and common sense.

Our desires exceed our resources and life is a set of trade offs.

Marginal analysis gives us a way of thinking about which trade-off or compromise to chose.

It is neither the only nor the "correct" way to think about the world.

But it is a useful tool to have in ones mental kit. And as Fogel's example demonstrates, it can provide surprising insight.

Their actual differences got lost in the din of campaign.

Press coverage made it seem like Amartya Sen was in the Congress's corner and Bhagwati, who the government has invited for the Delhi Economics Conclave scheduled in December, in the BJP's. Not so.

The differences between them are subtle but important.

As we might expect, to understand those differences we should use marginal analysis. Let's simplify matters and put all of India's growth problems into two buckets-capacity constraints (lack of education, health etc.) and incentive constraints (labour laws, GST etc.).

Amartya Sen, Jagadish Bhagwati and almost everyone else agree that we need to overcome both constraints to grow.

The question relevant to an economist, however, is what constraint we should solve at the margin.

It's the best use of marginal political capital-those Samajwadi Party votes that the UPA alleged bought by taking a magnanimous view on Netaji's finances-that Sen and Bhagwati disagree about.

Sen would like it spend on fixing capacity. Bhagwati would spend it to fixing incentives. Amartya Sen and Jagdish Bhagwati were fighting about which compromise is best. Between economists this is a blood feud.

Ofcourse this wasn't just a debate between economists; in the run up to the elections thousands of us chimed in as well.

The gentleman conspicuously absent from the debate was Narendra Modi. He offered no specifics through the election campaign.

For Modi doesn't believe that India is held back either by a capacity deficit or by an incentive deficit.

Modi believes that India is held back because of a deficit in national character, in a common purpose and in a collective will.

And Modi believes that he can bridge this deficit by invoking India's glorious past in stirring speeches, by advertising his own work ethic, by staging spectacles in foreign lands and, apparently, by turning up in his Sunday best to sweep the streets. Modi's mantra is growth through inspiration and moral regeneration.

Roads and bridges will be built, our cities and rivers will be cleaned, industry and agriculture will thrive because we have a sense of pride, a sense of our destiny.

Perhaps. Modi's electoral victory is not a rejection of Manmohanomics.

It is a rejection of economics-a Burkean plea to throw out the "sophisters, economists and calculators"; to restore the "age of chivalry", to recreate that lost Vedic Eden of Jan Sanghi imagination.

They don't want to compromise.

They want to stand tall. They have been put upon for too long. Now they are pushing back. And Modi will lead them and their beloved nation out of the dark shadows of her recent past to the sunlit uplands of a glorious future. Perhaps.

I may not take to the sight of the hectoring pracharak and his moral science lecture but there is nothing new or illegitimate about the emotional outburst that swept Modi to power.

Romanticism came hard on the heels of the Enlightenment, the Tea Party is a similar angry rejection of reason and Modi is only history's latest toughie to have a legion of fawning followers.

Nor is this excitement illegitimate.

The Swiss writer Alain de Botton writes that it is normal, and within limits endearing, for people to want to feel proud of where they come from, to want to identify with something beyond merely their own achievements, to want to anchor their identities beyond the ego.

True. The Modi wave is the cry of the national id struggling with the historical memory and the shame of subjugation.

It is certainly not my case that economists have any monopoly on reason.

Indeed you haven't quite seen reason so forlorn and abandoned till you have encountered the Arrow Debreu Model! Still the unreasonableness of economists does not negate reason.

The basic wisdom, of economics is that not compromising is costly.

If Modi doesn't heed this lesson, he risks running an administration that is ineffective at best and disastrous at worst.

This is because, like it or not, incentives and the Constitution matter. The passions that Modi has flamed will cool.

What will remain in their place is the cold ash of self-interest.

The public-spirited autowallah who gave the ISRO scientist a free ride home after the success of Mangalyaan can't afford to do it again.

He has a family to feed. With self-interest, we're back to worrying about incentives, capacity and trade-offs. Despite what many Modi supporters believe, he operates within our constitutional framework.

Our founding fathers, many of whom were Brahmin by birth, were bania by instinct. The whole system is designed for truck and barter.

They understood Keynes' dictum that it is ideas that we should fear, not vested interests. Not compromising is not a choice that the Constitution offers.

Modi may not need to placate allies in the Lok Sabha. But there is the Rajya Sabha. Then there are courts, state government, regulators and auditors.

The tawdry horse-trading that so offends the delicate conscience of our chattering classes is the conscious result of constitutional design.

If Modi can't summon his inner gujju he is done for. Providence will not grant Jan Sanghis their deepest desire-to live a life untroubled by such facts.

Modi can only succeed by breaking the hearts of the hot heads who voted for him. By being a relentless compromiser, a cool calculating dealmaker, a brilliant tactician who never forgets strategy.

By separating personal morality from public morality. And by understanding that in a poor country like India, compromise is not weakness, it is wisdom.

He can succeed by being the great economist statesman Manmohan Singh.

I end this piece with a tribute to one of our greatest Prime Ministers and statesman, Dr. Manmohan Singh.

He drained the fever swamp of irreconcilable passions that was India in the 1980s and brought us peace and prosperity.

He stooped so that we could conquer.

Here is wishing him a long and happy retirement. I hope we can, in the not so distant future, summon the collective will to say sorry. 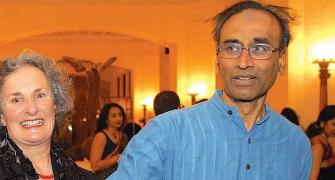 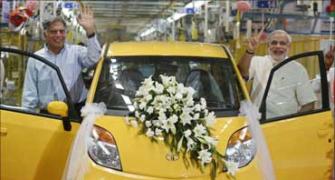