The independent institute advising the PM on jobs seems to have missed the point that the challenge is to create net additional jobs, says Mahesh Vyas. 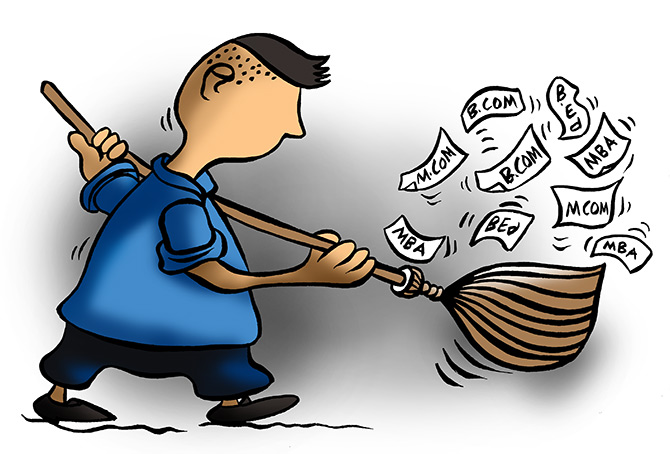 Prime Minister Narendra Modi stated in his response to the no-confidence motion in Parliament on July 20 that over ten million jobs were created in the country during the past one year.

He said this estimate is based on a survey by an independent institute.

His arithmetic was as follows:

4.5 million subscribers enrolled into the Employee Provident Fund (EPF) scheme during the nine months of September 2017 through May 2018.

Another 0.57 million enrolled into the National Pension Scheme (NPS) during the same period.

Thus, we see over 5 million subscribers added into these two schemes. The PM extrapolated this to 7 million.

Professionals such as chartered accountants, doctors and lawyers are estimated to have added another 0.6 million jobs. 17,000 CAs joined the system.

Then, a series of assumptions - 5,000 of these started new enterprises and each of them provided employment to 20 persons to give jobs to 100,000.

Of the 80,000 doctors, dental surgeons and Aayush doctors who graduate every year, 60 per cent start their own practice and provide employment to 5 persons each. This provides employment to another 240,000.

A similar 60 per cent of the 80,000 graduating lawyers provide jobs to two-three persons each and this adds another 200,000 jobs.

The transport sector added 2 million jobs to for drivers and cleaners.

Auto-rickshaws provided jobs to another 0.34 million.

The above adds up to 9.19 million, but the PM has rounded this off to 10 million.

I don’t think that there can be any dispute that jobs are being created.

They are always created. The debate is whether sufficient jobs are being created on a net basis. Many are replacement jobs.

And, the dhaba help was a farm labourer earlier. When he left the farms, there was no replacement because he was excess labour there anyway.

So, the truck driver’s job merely reflects jobs moving away from agriculture to services.

Similarly, EPS enrolments are not necessarily new jobs. They mostly reflect jobs moving from the unorganised sectors to the organised ones.

The independent institute advising the PM on jobs seems to have missed the point that the challenge is to create net additional jobs and not merely transfer jobs from one sector to another.

There are other, more serious, flaws in the advice provided by the institute.

It has failed to notice that the 100,000 jobs provided by CAs should be considered counted in EPF already because the example states that each enterprise could be hiring 20 persons.

It failed to account for the fact that a fairly good proportion of commercial vehicles are purchased by state road transport corporations, public sector companies, large private companies, mining companies, organised trucking and logistics companies etc. which are also covered under EPF or NPS.

Let’s return to the example of CAs. It is assumed that all CAs are necessarily employed. This may not be wrong.

But, during times when investments are low (and there is no dispute on that one), it is quite likely that CAs are doing jobs that were earlier done by a commerce graduate.

This leaves the commerce graduate unemployed.

Measurement of employment (and unemployment), like many other statistics, should be left to professional statisticians and professional organisations engaged in statistical measurement.

It would be a disaster if, for example, back-of-the-envelope calculations (nowadays in spreadsheets) are passed on as employment estimates.

We must recognise that in a country like India where employment is mostly in the unorganised sectors, it can be measured only through a comprehensive household survey.

The NSSO has just concluded (or at least was scheduled to complete) its household survey on the subject.

It will take a few months before its results are released. But, CMIE's Consumer Pyramids Household Survey (CPHS) already provides robust employment and unemployment estimates regularly.

It is likely that 10 million new jobs were created as the Prime Minister stated in Parliament.

But as I have explained above, not by the method that he describes and, more importantly, not on a net basis.