Instead of a consumption stimulus the government must address the NPA issue on a war footing and invest in infrastructure, affordable housing and exports, says Sanjeev Nayyar.

The economic slowdown and GDP growth of 5.7 per cent in the April-June quarter 2017 has dominated the media discourse for the last week.

Much was expected from the prime minister's speech at the Bharatiya Janata Party's national executive meeting. The focus was, however, on 'electricity for all', in the face of demand from the learned for fiscal stimulus, recapitalisation of banks, increase in government spending, and reduction in interest rates.

So what must the government do?

a. There need not be any knee-jerk reactions to what is being said. FY18 is a year of transformation and consolidation for the Indian economy. Every decision must be thought through carefully and an integrated view taken.

b. As for the fiscal stimulus, two things must be mentioned. The fiscal deficit for April to July 2017 is 92 per cent of the full year's figure.

Pay-outs on account of the 7th Pay Commission, One Rank One Pension and increase in dearness allowance are funds the government has already pumped in to stimulate consumption.

It can be argued that the government, by advancing the Budget date to February 1, has front-loaded expenditure.

A decision on stimulus must be based on total government revenues. Due to Goods and Services Tax (GST) and input credit claim of approximately Rs 62,000 crore (Rs 620 billion) against a payment of Rs 92,283 crore (Rs 922 billion) in July, the actual revenues from GST for FY18 is uncertain.

The Centre will do well to remember that the responsibility to compensate states for shortfall in their revenues lies with it.

The scope for any stimulus is thus limited.

c. There has also been a clamour for a reduction in prices of petrol and diesel with the media highlighting how the fall in global crude prices was not being passed on to the consumer but consumed by the central and state governments through higher taxes.

Certain facts must be kept in mind.

One, since large sections of India's working class are outside the formal economy, taxes on petroleum products is an equaliser because everyone who consumes is taxed.

Three, people should be made to realise that under-pricing means funding of under recoveries through the budget, off-budget bonds and by oil marketing companies.

This is exactly what the United Progressive Alliance did, and the adverse impact on inflation and results were there for all to see.

Merger of banks and their recapitalisation is being suggested. Let us recall the ill-planned and disastrous merger of Air India with Indian Airlines before planning any mergers. Address the core issue of NPAs before thinking M&A (mergers and acquisitions).

The Insolvency and Bankruptcy Code is a major step forward. Banks have an outstanding opportunity to make borrowers pay or relinquish control.

Political leadership, the Reserve Bank of India and banks must be willing to take on vested interests as never before. Their legal teams need to be proactive. Hope the judiciary rises to the occasion and ensure that vested interests do not delay proceedings under the 2016 Code.

Only profitable PSU banks must be recapitalised and that too if required. Money can be raised from the capital market and/or the government. Under-performing banks should be asked to reduce balance-sheet size, sell non-core assets and focus on NPA resolution.

The intent behind recapitalisation must be to meet the banks' capital requirements and not to stimulate growth through additional lending. Banks must lend to bankable projects, else the NPAs will erupt later.

It is quite widely accepted that the lack of private investment is a function of over-leveraged balance sheets and not high interest rates.

This government erred by not coming out with a white paper on the actual state of government finances and bank NPAs when it assumed office. It is a decision worthy of regret.

So what must one do? Here are some key thoughts.

1. The government must stick to maintaining macro-economic stability, one of its major achievements, and controlling inflation.

2. India is feeling the pain of three transformative changes namely GST, the Real Estate (Regulation and Development) Act, 2016 (RERA) and the Insolvency and Bankruptcy Code.

Each one of them is changing the way business is done. Adjusting to RERA will lead to a slowdown, hopefully temporarily, in the real estate sector.

The Insolvency Code is asking promoters to repay or give up management control, something unheard of in corporate India.

Companies that are put on the block must also be offered to MNCs who might pay a premium for getting a running facility without problems of land or mine acquisition.

The difficulties associated with change of mindsets and the way business is run need to be faced. There is no other way out.

Having said that, formalisation of the economy does not mean that the MSME (Small & Medium Enterprises) sector must die or get merged with the big players.

Corporate India and professional associations must, more than the government, guide the MSME/SMEs through this challenging period.

3. The government must resolve GST issues latest by November 15. It means ironing out server and software issues so that data can be uploaded seamlessly.

The concept of reverse charge, which has caused much confusion, should be postponed by a year. Revenue shortfall can be partially made up by bringing lawyers under GST (currently outside GST and under reverse charge).

Due to practical problems being faced, it appears that the GST's design and implementation, as was the case with demonetisation, is a work of theorists. Exporters too are complaining of their working capital being blocked.

Inputs from those with hands-on experience, be it artisans, chartered accountants or SMEs, should be taken if not done already. Make things simple so that entrepreneurs can focus on wealth and job creation.

4. The people of India will accept pain if they feel the government is sincere (as we saw during demonetisation) and has the humility to accept good suggestions. The bureaucracy should make things easier.

The government was sensible enough to start with a sub-optimum GST, so why not implement reporting in a phased manner?

5. Instead of a consumption stimulus, the government must invest in infrastructure, affordable housing and exports. It must upgrade railways and invite the private sector to supply rails. Make highways and rural roads. Focus on implementation and visible change.

Increasing ease of doing business for exporters is more important than offering sops.

The emphasis on renewable energy could be a reason for falling growth rates. Thus power companies earned lower returns, adversely affecting stakeholders. Conversely, there is high dependence on imported solar panels and cells, meaning capital is moving out of the country.

The government might like to strike a balance between increasing energy produced by conventional sources and under an accelerated renewable energy programme so that investments already made are optimised.

7. The government must identify sectors suffering from low capacity utilisation due to high imports. Whilst complying with World Trade Organization regulations, duties must be increased. The government did so, even if belatedly in the steel sector, and the results are there for all to see.

The above would help in job creation, in both informal and formal sectors.

8. It has become the norm for prime ministers, in the post Indira Gandhi era, to announce grand schemes and outlays implying how they are trying to improve things. India is governed by states more than the Centre.

For each state Niti Aayog should prepare a simple framework by which the common man can understand its performance. For example, agriculture can be evaluated based on total production, average realisation per tonne, increase in percentage of irrigated area over the last 10 years, scrapping of the APMC (Agricultural Produce Marketing Act), number of farmers markets in urban centres, hectares covered by drip irrigation, rate per unit of power charged, etc.

Similar numbers could be gathered for key performance parameters. To this add the additional resources given to the states by the 14th Finance Commission.

9. About 99 per cent of defunct notes (Rs 500 and Rs1,000) were deposited in banks. In order to prove that demonetisation resulted in higher tax revenues, the government must expedite collections from those "suspicious" high deposit accounts.

10. Increase in NPAs and banned notes making it to the bank accounts was possible only because of collusion with the bank staff. Tax collections from suspicious bank accounts will fall if tax officers and assessees collude.

When the government is committed to eradicating corruption, it must look at banks and tax departments. Without arrests and conviction, nothing will change.

Another worrying feature is judicial reforms. As T N Ninan wrote in Business Standard, 'Delays in courts make it difficult to enforce contracts -- and this is a factor in the World Bank's rankings on ease of doing business'.

However, lack of judicial reform is something this government cannot be blamed for. The judiciary is accountable only to itself.

The Chief Justice of India must give a roadmap for reducing the time taken to enforce contracts and reduce the backlog of cases. (Pending matters in Supreme Court were 60,517 as on May 1, 2017).

Some policy prescriptions must be implemented immediately while others should form part of the Budget Strategy 2018-19.

Politically speaking, the BJP must realise that Lutyens Delhi has got into election mode. Media coverage of Rahul Gandhi's visit to the US was part of the script. A well synchronised campaign to put the government on the defensive has started.

The BJP must find new ways to respond. What worked in 2014-16 might not work hereafter. Its opponents have identified the fault lines intelligently and are hitting where it hurts.

A policy that empowers leaders within a broad framework is the way to go.

The government must capitalise on its gains in macroeconomic stability to invest in infrastructure and hold the state governments accountable for what the Constitution has mandated them to do.

Sanjeev Nayyar is an independent columnist and founder of www.esamskriti.com. He says he is not an economist. On Twitter @sanjeev1927. 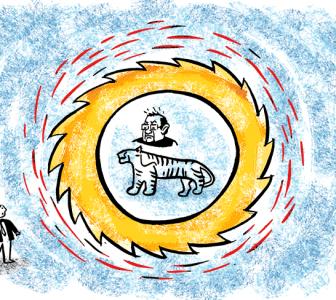 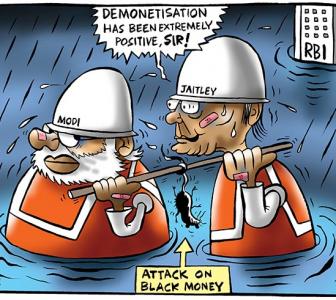 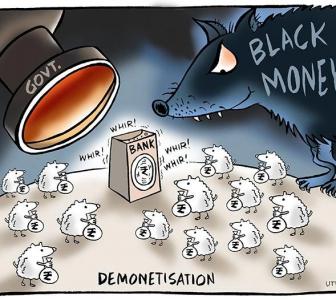