News
Business
Movies
Sports
Cricket
Get Ahead
Money Tips
Shopping
Sign in  |  Create a Rediffmail account
Rediff.com  » Business » 2017 saw questions, will 2018 get us answers on economy?

The NDA government was initially reticent about fleshing out its economic strategy for the future. But now that it has taken enough bold initiatives on the economic front, it must have the confidence to tell us more about its approach going forward, says Abheek Barua. 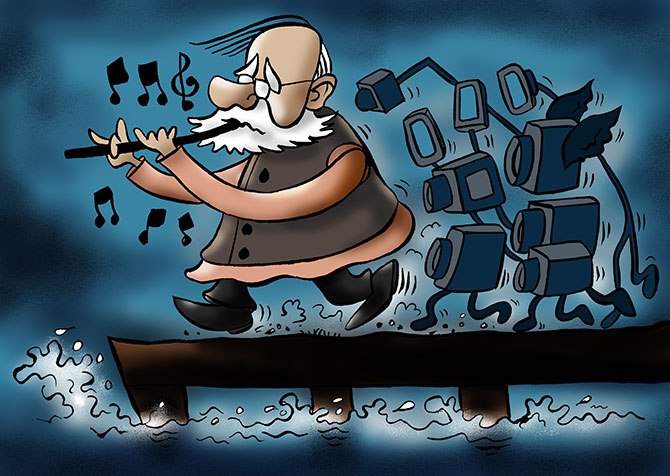 This year (2017) left us with more questions than answers.

Fissures in the ground between “government economists” (some members of the prime minister’s advisory council, the finance ministry’s chief economic advisor, and so forth) and those who decide monetary policy grew deeper, but some of us still can’t fathom what the fuss is all about.

Is it merely about the Reserve Bank of India’s (RBI’s) inability over the past year to forecast inflation correctly and “cooking up”, as a member of the PM’s advisory council somewhat colourfully put it, the inflation forecasts?

If (as is very likely from this month) the central bank’s margin of error goes down and it starts getting its numbers right, should the debate end?

Or is it about something bigger?

Should we review the flexible inflation-targeting regime itself and question its efficacy in an economy where growth might be suboptimal?

Does the argument that the central bank should “look through” inflation spikes apparently induced by supply shocks in perishable agricultural commodities (November’s sudden spike in consumer price inflation to 4.8 per cent came in large part on the back of skyrocketing fruit and vegetable prices) have some heft or is the fact that these shocks happen too often, with lingering after-effects, mean that they deserve monetary treatment?

Should we dig even deeper?

What is the right measure for the “output gap” that features so heavily in the discourse on policy, particularly monetary policy?

Is it merely the deviation of actual production from a trend line passed through data points for output?

Should it instead be gauged against an output level where a significant proportion of the work “force” is employed?

Isn’t it likely that the two will be very different?

How do we take any debate on macroeconomic policy forward with the biggest piece of the jigsaw puzzle – unemployment or in its absence wage data – missing?

Should we trust the numbers that a private agency claiming to have heavy boots on the ground produces on employment seriously or do we have to wait for the government to get its act together and produce better, more reliable numbers?

The discussion on jobs and employment policy has been muddied not only by the lack of data but the uncertainty that technological change has introduced.

Do we, as economist Vijay Joshi claimed in the RBI-organised L K Jha Memorial Lecture earlier this month, really have a decade or a decade and a half for our labour-intensive industries to drive growth before automation effectively closes that window?

Or is the window much smaller?

In a world where machines increasingly displace human functions, do conventional definitions of “labour-intensive” and “capital-intensive” sectors hold any longer?

If these distinctions do get blurred more rapidly than Mr Joshi predicts, has the old prescription of export orientation through a competitive exchange rate and a flexible labour market gone past its expiry date?

If firms indeed get more flexibility to hire and fire, might they not use the freedom to scale up by replacing workers with machines rather people?

Should we seriously consider subsidising wages for employers to counter this or at least introduce an element of market determination of minimum wages?

What is the alternative then?

Can the model for job growth now being peddled by the big management consulting firms (of relying increasingly on asset-light platform-based services - Uber and Ola are good examples) create jobs that have the scale to take on the massive demographic challenge?

At a broader level, does the future of jobs lie increasingly on non-tradeables like these services and bigger, less skill-intensive sectors such as construction?

If export of labour-intensive goods no longer serves as a critical engine of job growth, are we better off looking inwards and growing domestic manufacturing through “import substitution”?

So is the “Make in India” strategy also a “Make for India by firms in India” model?

Should the recent hike in import duties for electronic items be seen in this light?

Is there still a strong argument for unilateral commitment to free trade in a global scenario where there is growing support for trade barriers in both goods and services?

Why should sectors in which our capacities have grown over time to be both efficient and capable of meeting international standards (electrical equipment is the stock example here) get short shrift simply because they are capital intensive?

Finally, does Finance Minister Arun Jaitley’s commitment to sticking to the fiscal target this year put a decisive end to the debate on whether we can afford slippage in our targets for the budget balance as long as a certain “quality’’ of expenditure is maintained?

This becomes critical as we go into 2018 and the government revs up its election engine and the concomitant pressure for expenditure on welfare schemes increases.

Has the pressure for fiscal discipline become an unhealthy obsession with an orthodoxy that itself needs to be questioned?

If our sovereign ratings are indeed a constraint on exercising fiscal discretion, can our dialogue with the rating agencies (whose methodology has visible biases) go beyond headline numbers and elementary spread-sheet analysis to a richer discussion on how the likely step-jump in revenue collection capacity through digitalisation and the goods and services tax can alter our medium-term fiscal path?

Should we always fear the international rating agencies or instead consider the damage to their reputation that downgrading India would entail?

Also doesn’t the obsession with fiscal marksmanship often lead to distortions such as a rise in off-balance sheet borrowing and excessive reliance on financial engineering to get past fiscal barriers?

Which of the two do we prefer -- an apparently clean balance sheet but with hidden guarantees and commitments or a balance sheet that recognises the pulls and pressures of resource availability and the imperatives of allocation?

The National Democratic Alliance government was initially reticent about fleshing out its economic strategy for the future.

However, it has taken enough bold initiatives on the economic front to have the confidence to tell us more about its approach going forward.

Now it also has a formidable army of economists and policy makers on its side to articulate this. I am hoping to get answers to my list of questions.