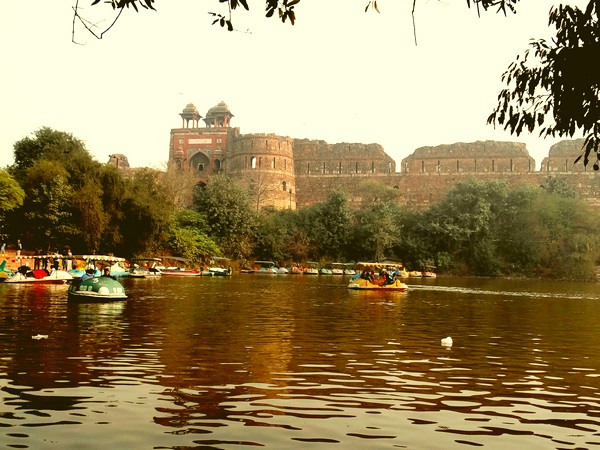 Purana Qila may be a regular weekend haunt for many locals but the history behind the landmark is as fascinating as it is bloody finds out Nirdesh K Singh.

Sher Shah Suri was India's first medieval rockstar Emperor. Who else can lay claim to successfully chase a Mughal Emperor out of the country? Such was Sher Shah Suri's fear that when Humayun's son Akbar was fighting Sher Shah's later successor Hem Chandra Vikramaditya in the Second Battle of Panipat, Akbar had his back towards Kabul so that he could flee like Humayun did sixteen years before. However, the ending this time was different as shown in the opening scene of movie Jodha Akbar.

My first introduction to Sher Shah was when I was travelling in Sasaram about ten years ago during the monsoon. Roads in Bihar were non-existent then and had turned into treacherous bumpy streams. This was when this truly majestic and beautiful edifice appeared. It just seemed so out of the place and incongruous in the surroundings that is Sasaram.

I leapt out of my car, ran few yards in the rain to the entrance, read the information board and realised the GT Road I was travelling on all this while was built by the same person. He would have been either mad to see the condition of the roads or mighty pleased that we were still using the roads he built without any repairs all these years.

Sher Shah's journey from Sasaram in Bihar to being Emperor of Delhi is truly incredible. According to some reports, Sher Shah Suri was born Farid Khan in Sasaram. He was a commander in the Mughal Army under Babur and soon became Governor of Bihar. Legend has it that he fought a tiger with bare hands; the reason probably why he was conferred with the title of Sher Khan. Seeing his chance he revolted and took over Bengal. In 1539, he defeated Humayun in the battle of Chausa and then again in Battle of Kannauj. Humayun fled India and Sher Khan took over Dinpanah, originally built by Humayun, renamed it Shergarh, proclaimed himself the emperor of India in 1540 and founded the Sur Dynasty. Today, Shergarh or Dinpanah is popularly known as Purana Qila.

Besides introducing elements to Dinpanah, Sher Shah built the mighty Grand Trunk Road from Chittagong to Kabul, built his own tomb in Sasaram, a hallmark of Afghan architecture in India and introduced our currency rupiya -– all this within a short span of five years. Sher Shah died in 1545 during the siege of Kalinjar Fort in Banda district of UP. 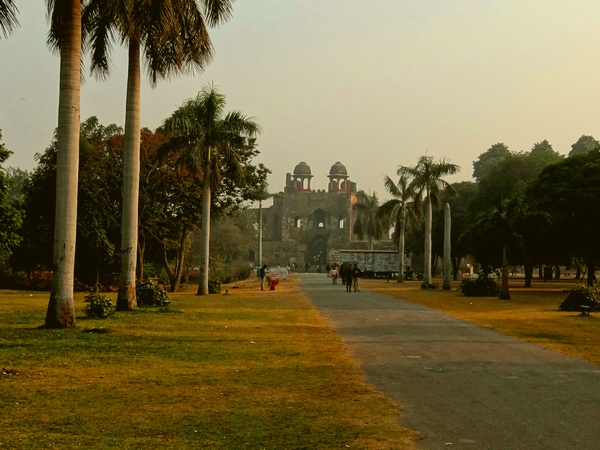 Before entering the main gate, get off at Mathura Road and enter the lake area. You can take the kids out boating. But you have more serious things to do. You walk towards the looming Talaaqi Gate.

This gate like the others is also capped with chattris and protected with bastions. Walk along the ramparts on the right with the rim of the lake on your right. Once the moat probably ran around the fort but now is limited to the western flank. Just make some noise walking so that you do not startle love birds cooing in the bushes.

Shergarh is a sprawling compound bound by walls on all sides. There are three gates: The Western Gate for entering is called Bada Darwaza flanked with mighty bastions, Northern Gate is called the Talaaqi Darwaza or the Forbidden Gate and the Southern Gate is called Humayun Gate.

Humayun Gate is the signature symbol of Purana Qila with the two ubiquitous pavilions on top. At the foot is an amphitheatre where the Light and Sound show about Seven Cities of Delhi is played out in the evenings. 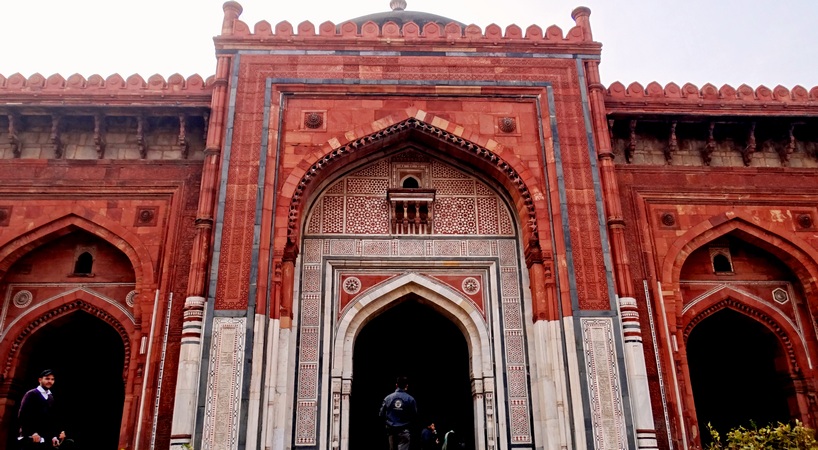 Along with the three gates, the main attraction of the complex is the Qila-e-Kuhna mosque built by Sher Shah Suri. The mosque marks the transition from Lodhi to Mughal architecture. Marble in shades of red, white and slate has been used for calligraphic inscriptions. Beware of the lady brandishing a lathi stick lest you forget to take your shoes off while entering. 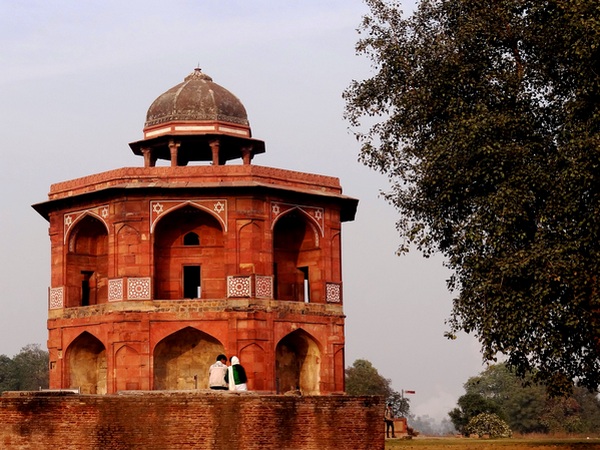 Sher Mandal is a small double storeyed building that was used by Humayun as library. After Sher Shah's death, Humayun had come back to reclaim Purana Qila. Here in Sher Mandal, Humayun while answering call to prayers, slipped, fell down the stairs and died. Humayun's reign might have been ordinary, but his death proved spectacular in the form of his tomb. Humayun's Tomb is arguably the best looking monument of Delhi that might have inspired the Taj Mahal.

Delhi 2010 Commonwealth Games had one great side effect. It might not have brought foreign tourists in droves but ASI has spruced up most monuments in Delhi. Outside, there are the standard red signs naming the monument in neat fonts. Insides have detailed nifty layout maps of the site. Each building at the entrance has easy-on-the-eyes information engraved on redstone tablets instead of the earlier ugly blue metal boards bent out of shape.

As is a norm at monuments in Delhi, there are groups of raucous people raising hell, families dutifully leaving their picnic debris on the lawns and everyone generally trying to outshout everyone else. Some foreigners who dare to come inside cower on the sidelines; they take a quick look and scamper away -- so much for a Rs 100 ticket. 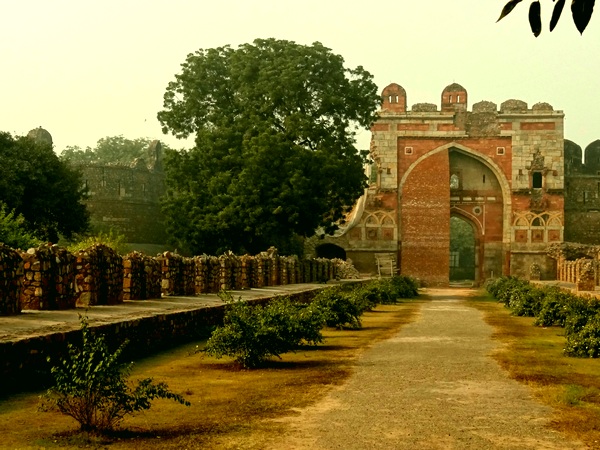 Walk out of Shergarh, cross the Mathura Road and you can see the Lal Darwaza, also called Sher Shah Gate. Entry to the gate is restricted as repair work is going on. Things don't look too good for the gate as you can see a ghastly high tech red brick wall erected under the arch to delay the inevitable.

End your trip by visiting the Khair-ul-Manazil that stands next to the Lal Darwaza. The mosque was built by Maham Anga the powerful wet nurse of Akbar. She raised Akbar when Sher Shah had sent Humayun on a leather hunt in Persia. Maham was the mother of Adham Khan, Akbar's foster brother. It also served as madarsa (on an Islamic centre of learning).

Getting there: Shergarh lies a short distance from Pragati Maidan Metro Station.