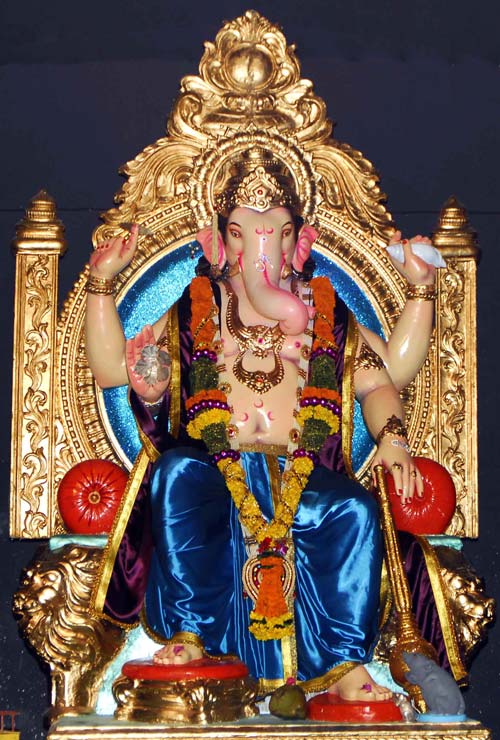 There is more to the Lord of Beginnings and Destroyer of Obstacles than intelligence and power. His legends offer lessons in duty, righteousness, kindness and forgiveness.

When I was young, I remember how I would sit next to my amma listening to numerous stories of Ganpati on Ganesh Chaturthi.

Between stuffing coconut inside rice dumplings and scolding me for stealing jaggery, she'd share the story of his birth and how he came to have an unusual elephant head. Each year, the stories varied in their significance, just like Ganesha's various forms.

As time passed, I got attracted to the morals he imparted through his life and legends.

Now that he has come visiting our homes again, let me share a few lessons from Ganesha's life that have stayed with me since childhood.

1. Duty above everything else 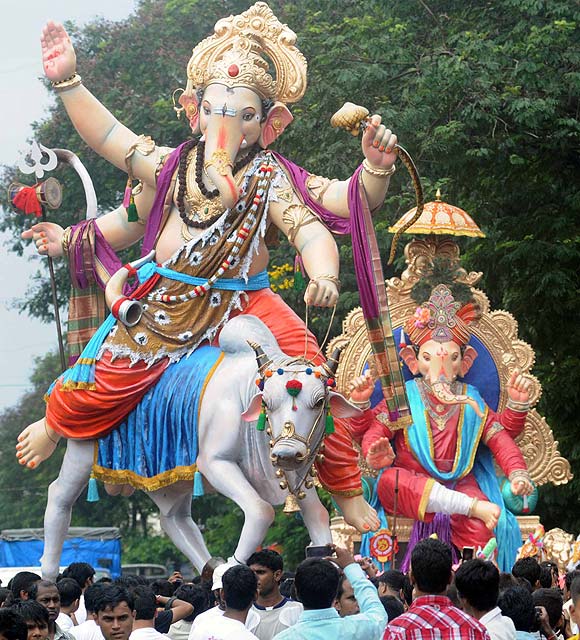 Ganesha is the son of Shiva and Parvati and his birth and transformation are part of an interesting story.

Legend has it that one day, when Shiva was away, Parvati created Ganesha out of the dirt she collected from her body.

Before going for a bath, she asked Ganesha to guard the entrance to her door and not allow anyone to enter.

When Shiva returned home, he was surprised to find a young boy at the door. When the boy refused to let him in, an enraged Shiva, who naturally did not recognise his son, beheaded Ganesha and proceeded indoors to meet his wife.

When Parvati came to know that her husband had beheaded their son, she was grief-stricken and ordered Shiva to find the head of the first living being he came across to replace their son's, so that they could bring him back to life. Since it was an elephant that Shiva spotted first, Ganesha ended up with an elephant head.

The story of Ganesha's elephant-headed form tells us that he believed in duty and righteousness. He lost his human head while fulfilling his duties as a son.

At a time when family values are diminishing by the day and a show of love for parents is reduced to a few days off the calendar, the story of dutiful Ganesha is a befitting example to cherish.

2. Make the most of what you have 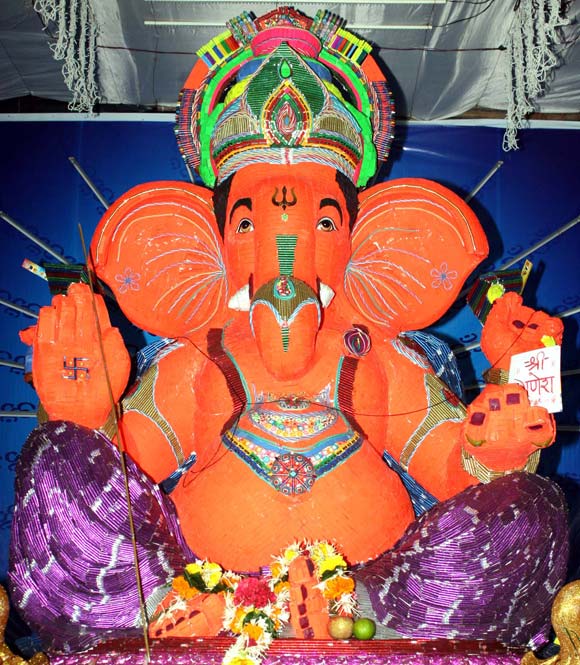 It is human to crib and complain about what we don't have. But this story of Ganesha shows you how to make the most of what you do possess.

Both Shiva and Parvati loved to play with their two sons, Ganesha and Kartikeya. One day, the parents decided to issue a challenge to test their children's skills.

The winner of the challenge, they said, would earn a miracle fruit -- a fruit which would provide supreme knowledge and immortality to its owner.

The challenge was that both of them had to run three times around the world. Whoever came first would earn the fruit as a gift.

As soon as the task was announced, Kartikeya left immediately. He rode his peacock and left on his world tour. On his way, he halted at every sacred place, praying and seeking their blessings.

On the other hand, Ganesha stood there and put on his thinking hat. He looked down at his stout body and his vehicle -- the rat. In his head, he was sure that no matter how hard he tried, it would be impossible to compete with his brother.

He collected his thoughts and turned to face his parents. When Shiva asked why he did not start on the journey, he replied: "To me, my parents are my world. I would prefer circumnavigating you thrice."

Needless to say, when Kartikeya returned, Ganesha was already smiling because he knew he had won the race.

This story tells us how we must not fret over our physical weaknesses or limitations, and instead use our wisdom and intelligence to overcome difficult situations.

3. Be a good listener 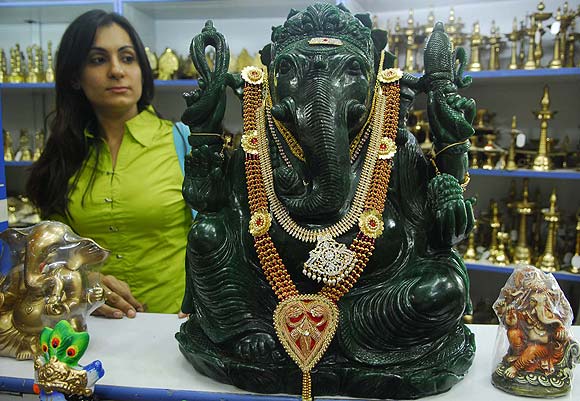 A good listener is as effective as a good talker.

With two large ears, Ganesha exemplifies this message. When people share their grief and sorrow with Ganesha, what they actually have is two-way communication, where Ganesha is playing the role of an active listener.

Most of the time what people really seek is a person whom they can talk to, a person who will listen without being judgemental. It is not important for a listener to shell out opinions or advice, you simply have to let them pour their hearts out.

A good listener always has a better understanding of the situation at hand. In decision-making, listening to others helps you analyse the situation from a different perspective and hence, guides you to a better solution.

So the next time someone walks up to you to communicate something, remember that listening is a crucial part of the process. 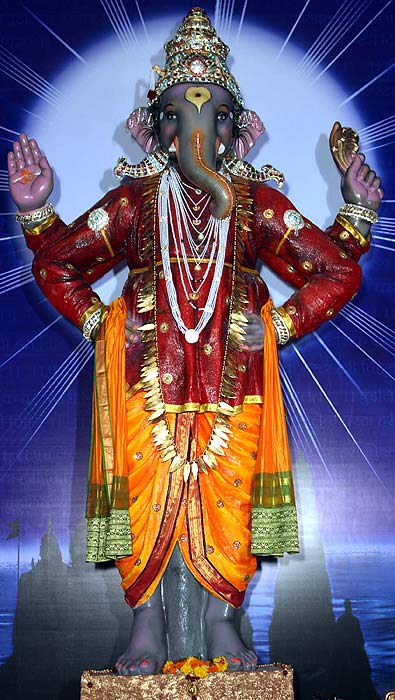 Power can be self-destructive. Hence, with great power comes a great responsibility.

For an elephant, the trunk is the most important part of his body. It enables the animal to pick up food, collect water, breathe and also communicate with each other.

The elephant, when angry, also uses its trunk to punish miscreants.

If you observe the trunk of Ganesha on any idol, it is always rolled up in a certain fashion. This suggests that he controls the power he wields.

While it is important to possess power, which can come from wealth, intelligence or one's success, it is equally pertinent to have control over it.

5. Sacrifice for the common good 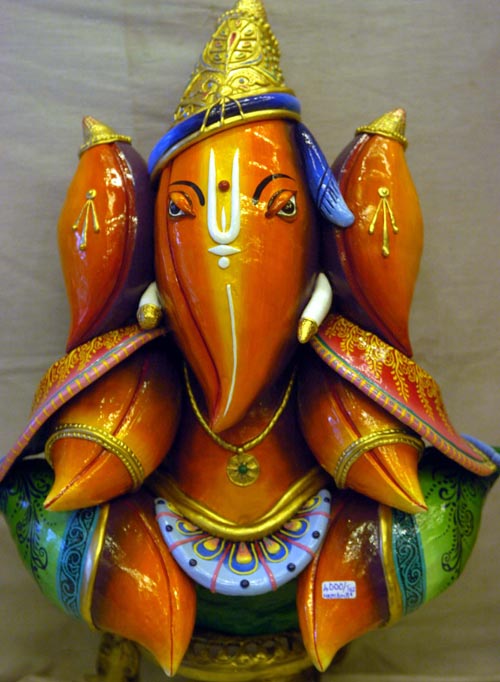 Although Ganesha has the head of an elephant, one of his tusks is broken.

Legend has it that when Ganesha was writing the Mahabharata dictated by Sage Vyas, his pen broke. To avoid any interruption, the diligent god is said to have broken his tusk to continue writing the epic.

Ganesha did not hesitate to sacrifice his tusk to fulfil a larger purpose. Perhaps, this is also one of the reasons martyrs attribute their selfless service to a cause.

You may not necessarily sacrifice your life like our jawans, because sacrifice is also about being selfless. If you realise that your selflessness will help someone achieve something good, you must not hesitate to make yourself useful.

6. Kindness to cool the heat of anger 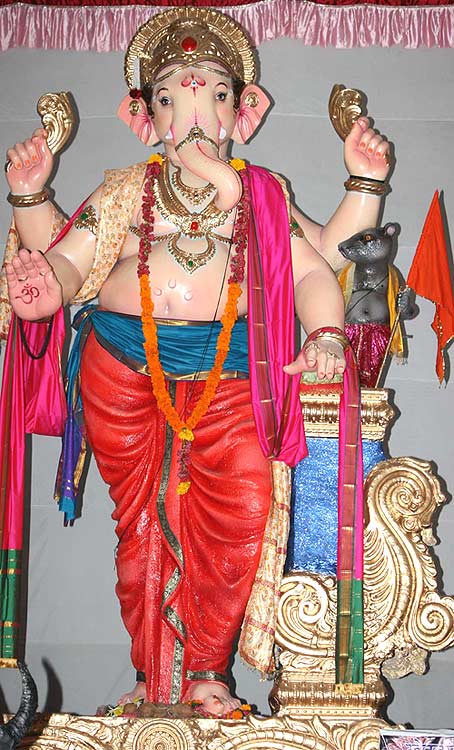 Holding on to anger, they say, is like grasping a hot coal with the intent of throwing it at someone else. However, eventually, you are the one who gets burned in the process.

A story goes that one day, Ganesha was invited to a big feast. Since he was very fond of sweets, he ended up consuming much over his normal capacity.

When he noticed that his stomach had bloated unusually, he felt guilty of having eaten too much. Since he did not want anyone to catch him in his embarrassing condition, he grabbed hold of a snake and wrapped it over his stomach to disguise his bulging belly.

He waited for night to fall so that he could start on his journey home, hoping that nobody would see him. Unfortunately, the moon caught sight of him on his way and could not resist mocking an already shy Ganesha, bursting into fits of laughter.

When the moon did not stop, Ganesha got angry and cursed the moon, saying that he would be invisible from that day on.

When that happened, the moon realised his mistake and begged Ganesha to forgive him.

Since Ganesha could not revoke his curse, he proclaimed that the moon would grow thinner each day and remain invisible on one day of the month. The day, known as amavasya, is considered inauspicious in our country.

This legend of Ganesha reminds us to be kind in our actions and forgive those who ask for it. 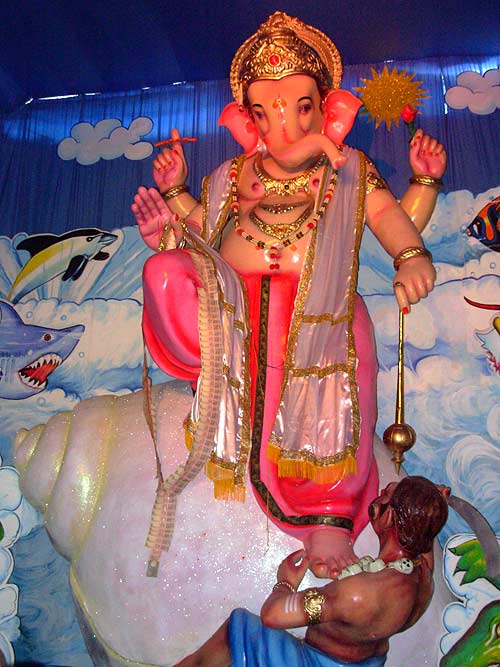 In chasing material desires, fame and wealth, we lose connection with our inner selves.

Most of the time, we ask ourselves questions like: Am I really happy? Have I achieved all I can?

Ganesha tells you that happiness is a state of mind that is achieved when you are able to communicate with your inner self.

If you observe the Ganesha idol carefully, you will notice that while one of his feet rests on the ground, the other is neatly folded up. This symbolises a healthy balance of materialism and spirituality.

While it is impossible to let go of one's material desires, it is important to maintain a healthy balance between one's spiritual and material needs to lead a happy and content life.

8. Humility and respect for everyone 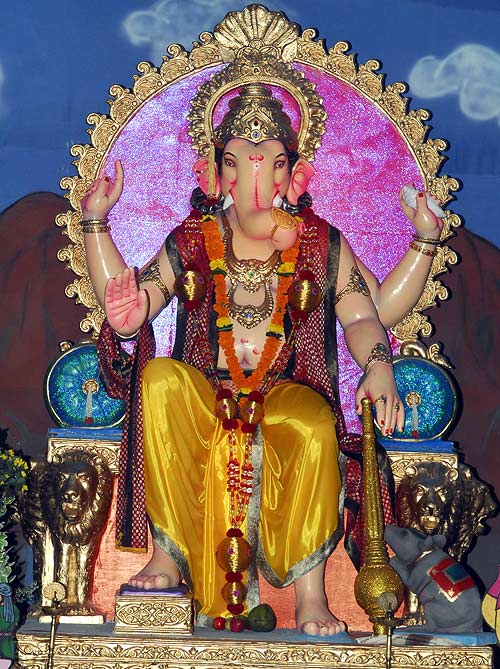 To many, it may seem unusual that the mighty Ganesha chose the mouse as his vehicle.

The mouse is a peculiar rodent. Humans detest the mouse because it is uncouth and feeds on our food and usually attacks in the dark.

Ganesha's choosing the mouse outlines his humility and respect for the tiniest of creatures.

This trait is important to apply in life, so that we imbibe mutual respect for people irrespective of their backgrounds and positions in society.

9. Where there is wisdom, there is success 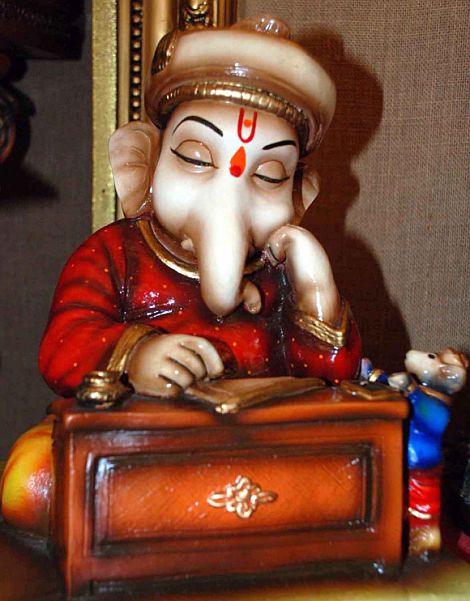 In the northern and southern parts of India, where Ganesha is worshipped the most, he is seen accompanied by the goddesses Saraswati on his left and Lakshmi on his right.

This means that success is bound to accompany those who possess knowledge and wisdom. 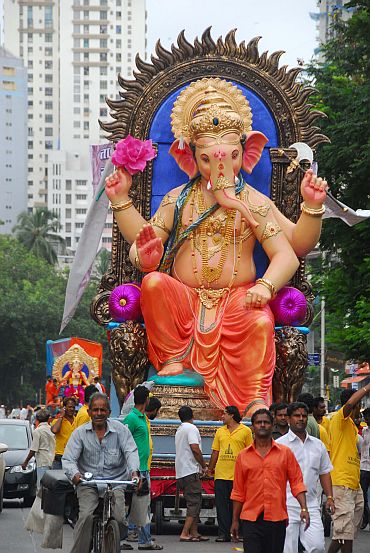 There is a reason why Lokmanya Tilak particularly selected the Ganesh Chaturthi as a festival to spread the message of national integrity during the freedom struggle.

It is one of the few where young and old, rich and poor join in the celebrations with no qualms whatsoever.

My mother says the colour they spray on you when you celebrate the festival diminishes any distinction of caste, colour or religion on earth. It must be true, because, people rejoice when the idol is brought home and also celebrate when it is immersed in the sea.

Every year, Ganesha brings joy and happiness not only into our little homes, but also strives to touch our lives and hearts with his goodness and love.