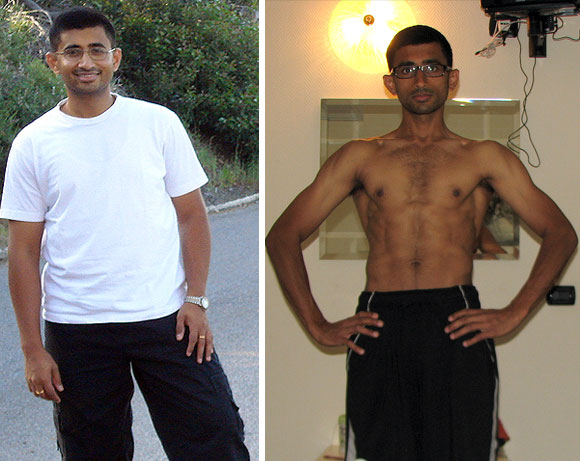 Readers share the stories and strategies behind their weight loss.

Last week, we invited you to share your diet and exercise strategies with us.

Here is another response from 33-year-old Sandeep Menon of Pune, who lost 24 kg after being inspired by Aamir Khan's physique in the movie Ghajini:

The silliest part is the reason why I started bodybuilding -- it was the movie Ghajini. No, it wasn't just inspiration, but sheer arrogance. When I saw Aamir Khan had a six-pack build (after Shah Rukh Khan built his), I decided that it was nothing difficult. If they could, I could definitely do so too. I am sure most of us look down upon movie stars -- well, I at least did. So, in November 2009, I set a goal of nine months to get six-pack abs. I read a whole lot on bodybuilding and the initial eight or nine months was strictly HIIT or High Intensity Interval Training. Once in a while I'd do some weights too.

By August 2010, I had six pack abs but weighed under 65 kg. I wasn't unhealthy but looked extremely lean. More reading and studying later, I paid more attention to weight-lifting and nutrition too. I was way too strict about my nutrition for the first nine months, but not very smart. I avoided buffets and fried foods, but didn't pay attention to the protein and fat intake. Yes, fats need to be consumed, but healthy fats in moderate amounts. Soon I realised that, there was no goal in bodybuilding, it was a journey and has to be enjoyed throughout your life.

There was one hurdle I had to overcome. All this while, I had a problem with my leg -- my right knee, to be exact. I had torn my anterior cruciate ligament in February 2007. I decided to get it operated around mid-2010 and so decided that my weigh loss would be of help. I tend to put on weight very fast, I mean really fast. Considering that I had lost a good amount of weight, even if I couldn't work out for a few weeks after my surgery, I knew I could afford to put on a few kilos. Fortunately, the workouts I had done till then helped. I got my surgery done in July 2010 and by the time I resumed my workouts in November 2010, I didn't put on a lot of weight. This was primarily because I had lost around four kilos of muscle mass after my surgery, due to muscular atrophy. If you saw my legs at that time, you would see that my right leg was significantly thinner than the left.

I now work out using weights three to four times a week. I do cardio everyday. The days I don't do weights, I run for longer. For fat loss, ideally, HIIT is best. Bursts of high-intensity sprints between a minute of moderate intensity jogging can get the job done in 20 minutes a day.

However, now that I have well under 8 per cent of body fat, I want to train myself to run a 10km or half-marathon soon. So I am practicing running for longer periods.

The aspect that is as important as exercise is nutrition. Our ancestors have said 'everything in moderation'. If you look at the most ideal diets prescribed by the smartest nutritionists, this is what they'll come down to -- moderation. Even if it's red meat or butter or cheese, moderation is key. Sure, I was a little extreme because my goals were extreme. But now I am a little more relaxed and eat almost everything, but in moderation.

Now I feel guilty if I don't work out even for one day. It's become second nature, like brushing teeth. It's said that if you do anything for a month, that becomes a habit. Just follow a routine and within a month, working out will become a habit you'll enjoy.

We want you to share your weight loss story with us. Write in to getahead@rediff.co.in (subject line: 'How I lost weight'), with a before and after photograph, if possible and we'll feature the best entries right here!