Giving a voice to girls' education 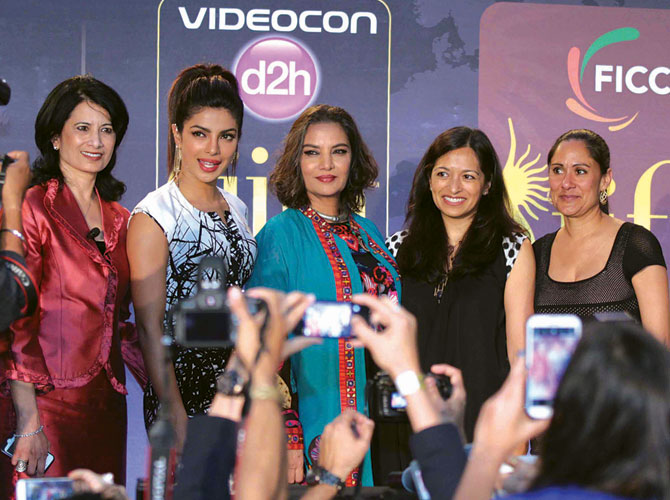 Priyanka Chopra, Shabana Azmi and Sakina Jaffrey root for a cause close to their heart. Arthur J Pais listens in

On a rainy day near Bareilly, Uttar Pradesh, Priyanka Chopra's mother, Madhu -- a gynaecologist -- heard a child cry by the roadside. She stopped her vehicle to find an abandoned baby and brought her home.

'I was 12 and I thought I had a baby sister,' Chopra recalled. But soon the baby was given away to a couple looking to adopt.

The would-be-actress was heart broken, but she said, since that day she began to think of empowering girls so that no one would think of them as a burden.

Chopra was part of a session titled -- the 'Girl Rising Project' on the third day, April 26, of the International Indian Film Academy Awards. Veteran actress and activist Shabana Azmi, House of Cards actress Sakina Jaffrey and Deputy Director of the Girl Rising project Tara Abrahams were the other panellists.

The discussion was moderated by Renu Khator, the chancellor of Texas University System.

As part of the project, a documentary Girl Rising, was also featured. Directed by Oscar-nominated filmmaker Richard E Robbins, it revolves around nine young women and children from all over the world who have empowered themselves with the help of education.

The Indian segment of the documentary tells the story of Ruksana and her family of pavement dwellers in Kolkata. Her father has sacrificed everything to send his daughters to school. Ruksana's life is filled with danger, but she escapes into her artwork and draws strength from her father's resolve.

Her vivid imagination continues to run free on the streets of Kolkata, where she fills her sketchbook with images of her world. Ruksana continues to excel in school, especially in mathematics and geography, and she recently added classes in dancing and karate.

Girl Rising partner in India, World Vision, supports Ruksana and her sisters with school supplies, tutoring, tuition support, and medical assistance to help them prosper in school and in life.

Ruksana's story is told by Sooni Taraporevala, the award-winning screenwriter of Mississippi Masala, The Namesake and the Academy Award-nominated Salaam Bombay!

Actors, who have lent their voices to documentaries from other parts of the world, include Anne Hathway, Selena Gomez and Kate Blanchett.

'It is a global issue (education and empowerment of women) and it will take everyone, across international borders and cultural divides, to support those who are standing up for equality in education,' Chopra said.

She added that she would look around for other movie stars in India to narrate the film when it would be dubbed in other Indian languages.

Chopra said that her doctor parents had brought her up with the same freedom and responsibilities as a male.

She told the over 250 guests present, that no parent should look at her daughter as a burden. Educating girls can transform families, communities, countries and eventually, the world, she asserted.

Chopra also said the idea of philanthropy had been gently drilled into her from her childhood. She particularly remembered her mother waking up in the middle of the night when a poor patient, who could not afford the regular medical care in Bareilly, wanted help.

She added that 'fortunately,' she came from a family where there was no difference between a girl and boy child. 'But to bring a change, the mindset of the people has to be changed,' she mused. 'A girl child is not a burden, and I would like to say if you educating one girl is like educating a family.'

Jaffrey paid tribute to her mother -- actor and cookbook author Madhur Jaffrey -- and said she encouraged her and her two sisters to give back.

Azmi spoke about the ongoing empowerment campaign in Uttar Pradesh -- where hundreds of girls in small towns and villages have taken a pledge against child marriage. Banned by the law, child marriages have continued in many parts of India.

'I have seen many girls as young as 12 with sindoor,' she said. 'Many of them have very little education.'

She added that even many Indian parents, who are well educated and have lived abroad for quite some time, internalise the notions of a male-dominated society.

Azmi recalled the furore she created by her role in Mahesh Bhatt's unconventional 1980s film Arth in which her character rejects her unfaithful husband -- who seeks her forgiveness -- and chooses to live by herself.

She said the movie's distributor, in India, wanted a conventional ending and even some of the filmmaker's friends pressurized him to change the ending, but Bhatt refused to budge and Arth went on to become a landmark commercial film.

'Suddenly a lot of women started coming to me after that with their marital problems,' Azmi said.

She slowly realised the importance of empowering young girls. And in this process their education became a big goal, she added.

Over the years, Azmi has backed many campaigns some in the face of popular opposition, for instance the rights of footpath dwellers in Mumbai, but the girl child's education has remained her most ardent campaign.

Azmi added that people who could help someone without much hassle are oblivious or indifferent.

'Do we try to find out if the bai (domestic help in India), who works in our homes, is sending her children to school?' she asked. 'Do we have a human relationship with the woman who takes care of our home?'

People should not think that they ought to fight to change the whole world, Azmi added. 'Helping just one person makes a big change.'