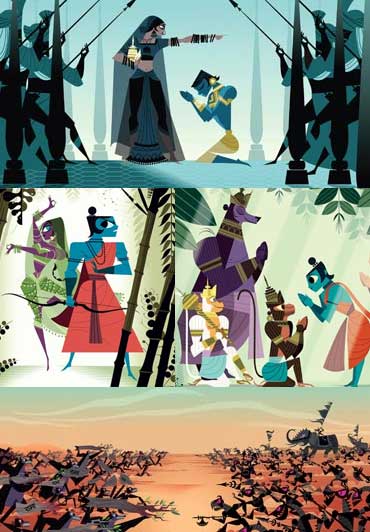 One of the popular legends behind Diwali is that it marks Lord Rama's return from exile. Sanjay Patel presents the story before from Ramayana: The Divine Loophole.

There's probably no month in the Hindu calendar that doesn't have a festival. But in this crowded celebrations calendar, the one that stands out is the festival of lights -- Diwali.

What makes Diwali so special is that it isn't just the Hindus who celebrate the festival. For Jains, it marks the attainment of moksha by Mahavira, the most respected Tirthankara. Sikhs celebrate it to commemorate the return of their religious leader Guru Hargobindji to Amritsar, after rescuing 52 kings from the clutches of Emperor Jehangir.

For Hindus, several myths and deities, including the return of Lord Rama to Ayodhya after 14 years in exile, are associated with the festival.

Sanjay Patel, who has written Ramayana: The Divine Loophole, a graphic narrative with over 100 illustrations, shares some images from his epic endeavour.

Images from Ramayana: The Divine Loophole by Sanjay Patel, published by Chronicle Books, reproduced with permission. 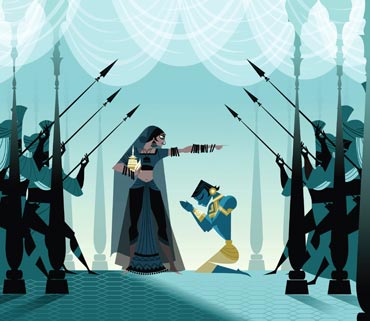 Image: Kaikeyi, one of the queens of King Dasharatha and Lord Rama's stepmother, banishes him from his father's kingdom (Ayodhya) for 14 years so that her biological son Bharata may rule. Kaikeyi invoked a promise that her husband Dasharatha had made to her when she saved his life during a battle. 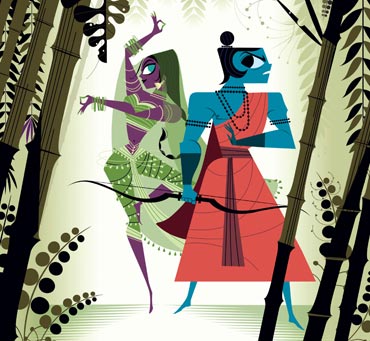 Image: Shurpanaka, Ravana's sister meets Lord Rama, the seventh incarnation of Lord Vishnu, when he is in exile and is attracted to him. When he spurns her overtures she threatens to harm Sita. An infuriated Lakshmana cuts off her nose and ears. This eventually leads to Ravana kidnapping Sita and the start of the epic fight of the Ramayana. 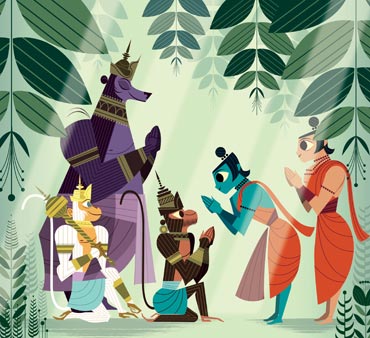 Image: The meeting of Lord Rama and Hanuman, who promised undying undying devotion to his master. Lord Rama makes an alliance with the monkey king Sugreeva, who raises an army of monkeys, including Hanuman, and bears.

Image: The final battle to take over Lanka and rescue Sita. Lord Rama's troops accessed the island of Lanka by writing Lord Rama's name on boulders and making a bridge out of them. 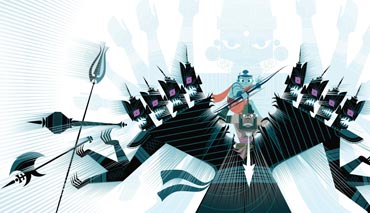 Image: Lord Rama, riding on Hanuman's shoulders, slays Ravana with a single arrow. The 10-headed evil king had been granted a life of thousands of years after he prayed to Lord Shiva. The power and the life ended when Rama killed him with a special weapon. The day is celebrated as Vijaya Dashami or Dussehra. Diwali, which comes on the amavaysa (no moon night) after Dussehra, is celebrated to mark Rama, Sita and Lakshmana's return from exile.
More