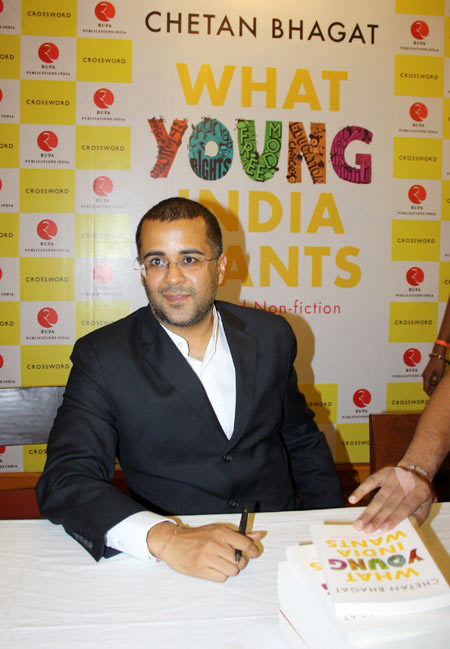 India's number one bestselling author launched his first non-fiction book, a collection of his essays and columns in Mumbai. Here's what happened.

In the weeks preceding the Mumbai launch of his new book, I was frantically trying to get at least two authors to talk about Chetan Bhagat, what he meant to them and what his popularity said about us, as a people.

Both the authors, senior to him by age and experience, refused. One sent a curt 'Sorry. Not interested' text message.

The other spoke extensively about his arrogance, his lack of social skills and of course his inability to string together a grammatically correct sentence. At the same time, the author who refused to be quoted and be associated with him, confessed that there was no one else in the business who had as good a grasp on the pulse of the nation as Chetan Bhagat. Sure his marketing skills were fantastic, the author admitted, but he did seem to know what young India seemed to want. 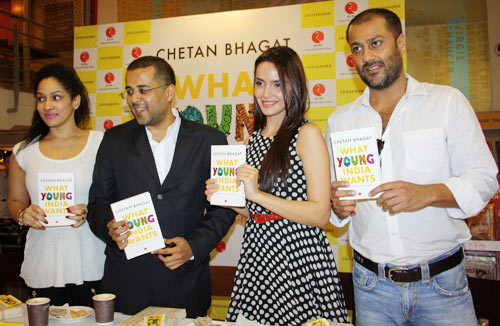 Two weeks after this conversation, I found myself standing in the last row of a fairly packed bookshop in South Mumbai waiting for Bhagat and three other guests to come by and launch his new book quite simply titled What Young India wants!

The book is a collection of Chetan Bhagat's essays and newspaper columns. Bhagat is dressed in a white Chinese collared shirt and a crisp black jacket that screams 'I have arrived'.

On the dais, Bhagat occupies the seat in the centre. On his left are actress Shazahn Padamsee who has managed to grab the attention of the paparazzi present and an unassuming Abhishek Kapoor who is set to direct Kai Po Che a movie based on Bhagat's The 3 Mistakes of My Life.

To his right is an immaculately turned out Masaba Gupta fresh from her showing at the recently concluded Lakme Fashion Week and a lanky fellow who seems to be thankful for even getting a seat on the dais. That's Bhagat's publisher, Kapish Mehta.

Chetan Bhagat looks over at the audience present from behind the table that stands between him and us just like that the event gets underway, a good half hour behind schedule.

The 'moderator' for the discussion is a suit-clad gentleman, a familiar face at Crossword who organises events for the bookstore. In my conversation with him later, I get the feeling he hasn't read any of Bhagat's books, though he gives the impression that he has flipped though some of the columns.

Presently he tells us that some of the audience has been 'waiting for hours' for the event to start, which is received with a short laugh by a friend who has accompanied me to the launch. 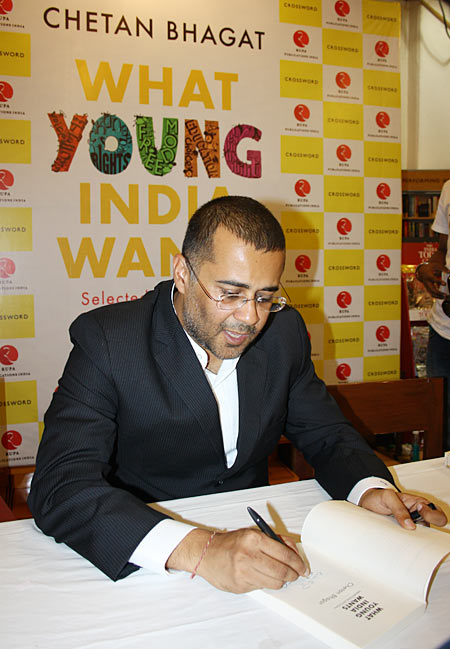 Sitting smack in the centre of the stage and armed with a microphone, Chetan Bhagat seems every bit the man who enjoys the attention he's been getting.

"Young India wants a good job and a girlfriend," Bhagat declares in his trademark sweeping style.

"That's pretty much his last four books!" the friend sniggers.

My friend and a couple of other young men standing next to us who keep asking 'Why the hell does he have to invite a small time actress to his book launch?' represent an important but tiny minority of Bhagat's detractors who badger him on Twitter and Facebook and complain about his arrogance, his callous opinions and his cold blooded murder of the English language.

In some ways, Bhagat thrives on this very hatred and (I suspect) derives a great deal of glee when he finds himself trending on Twitter for his views.

And yet, here we were, looking at a fairly packed bookstore and a good deal of people from various age groups waiting to hear their hero speak. There are journalists too, armed with their video cameras and microphones hoping to get that o-n-e more controversial quote from a man who always seems ready to give them one.

Sure enough they get their moment when Bhagat talks about Team Anna lacking in leadership. "Only being passionate isn't good enough," he says, "You need to have good negotiation skills to get what you want."

Bhagat speaks the language of corporate India. Heck he even dresses the part! He talks about how it is not necessary to be 'poor to be good' and that you can indeed be 'rich... have glamorous friends and still be a good person'.

"Why does Anna Hazare have to stress on his austerity?" he asks, "Why does social activism always be associated with poverty alone?"

Even though he shares the dais with four other people, Bhagat holds court pretty much through the evening. Masaba barely talks, Shazahn who may have had some hopes of showing her brilliance says a few words but is quiet through the evening. Abhishek Kapoor takes a few questions but the evening clearly belongs to Chetan Bhagat. He talks about youth not having any real power because they have never been a strong vote bank; he talks about the importance of reading the newspaper not just the glossy supplements that come with it; he talks about taking charge of one's life and being the 'hero of your life'.

Through all of this and all the commotion (that includes the non-stop wailing of a child) members of the audience are glued to their seats. One of them pulls out an iPad to shoot pictures, another one is taking notes and yet another one is simply watching the man talk. 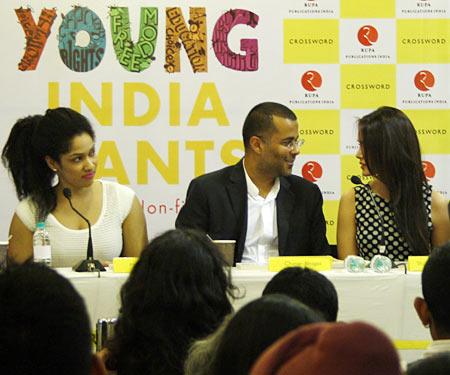 There is a smattering of firangs in the crowd. One of them is Maike Steuer, a German journalist. Steuer is in India blogging about Bollywood and has, like almost everyone in the audience, read at least some of Bhagat's books. She tells me she found his writing style easy and fun to read though 'the ending of One Night at a Call Centre was a little over the top',

Shefali Bhagya, a student of economics at Mumbai's NMIMS tells me that she 'connects' with Bhagat's writing. "He writes for us," she says not so much gushingly but more matter-of-factly.

Ashish Patel on the other hand is a bit of a hero worshipper. He's travelled from the other end of town for the launch and is probably one of those people the moderator was referring to who was 'waiting for hours'. He's read all of Bhagat's books but he picks 2 States as his favourite because 'it was my story'. Patel, as it turned out was in love with a Punjabi girl till differences in culture came in the way. "He tells our stories," Patel tells me before turning to queue up for an autograph.

For Shivraman Balakrishnan a senior marketing manager at Crossword, Bhagat is the man who attracts younger readers to his store. "Earlier our average age group of customers was between 25 and 44. Now it starts at 22 years. That is a huge difference," he says.

"Chetan Bhagat was single-handedly responsible for getting 8-9 new racks there," he says pointing to heavily stacked Indian Fiction racks in one corner of the store. "That wouldn't have been possible before he hit the market." 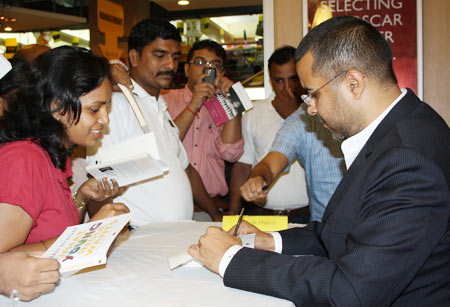 There is no doubt that Bhagat's entry has changed the face of Indian publishing in ways few could have imagined. His English, his cockiness and his simplistic views on life notwithstanding, Chetan Bhagat has been hugely responsible to changing the rules of the game.

I would perhaps be a little wary of calling him an intellectual or an influencer. However to write off a man whose books have sold lakhs of copies consistently for over eight years would be foolhardy. It is also in a way a sign that the man is aware of just what young India really wants and delivering it book after book.

In many ways then, Chetan Bhagat is someone who (whether we like it or not) is less of an influencer and more a mirror of the thoughts of fairly large number of young Indians.

So when he says that all young Indians want is a good job and a good girlfriend, it doesn't reflect so much on his intellect or the lack of it but rather I suspect that of our own.