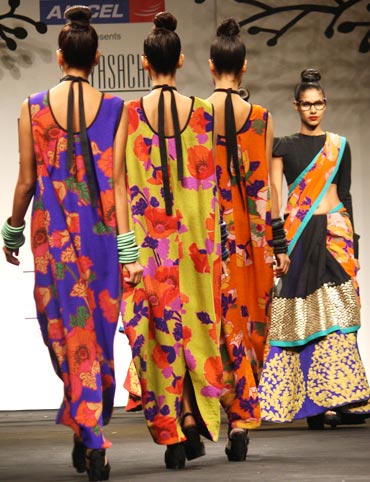 A few high-profile designers are at loggerheads with the management at Lakme Fashion Week and pulled out of the event. We find out the story behind this move.

Controversies and fashion seem to be made for each other. Like Bollywood the fashion industry also seems to be heading the 'camp' way.

Big names like Neeta Lulla, Vikam Phadnis and Nikasha Tawadey have launched a rebellion against the organisers of Lakme Fashion Week by going on record with their grievances.

The three have alleged that the organisers discriminate against Mumbai-based fashion designers, favouring Delhi-based and younger talent when it comes to offering the later prime slots to showcase their designs and sponsored shows. In sponsored shows, the corporate entity that backs up a designer picks up the tab.

Vikram, Neeta and Nikasha have further alleged that the organisers did not even send them fashion invites.

Lakme-Lever head honcho Anil Chopra, however, denied that there was any "issue" whatsoever.

Speaking to rediff.com, Chopra asked cryptically "What have they not been invited to? Not invited to see a show or not invite to participate?"

"Anyway, three designers don't make an event," he said, referring to the designers who have gone on record with their grouse against Lakme.

A report published in After Hours, a fashion and lifestyle supplement of Mumbai newspaper DNA also quoted one LFW-participating designer as saying that Sabyasachi Mukherjee wouldn't have showcased his creations this season at all if it were not a sponsored show.

When rediff.com spoke to Sabya, he denied that he had ever made any such comment to a fellow designer. In fact, he said that the entire controversy about some designers getting sponsored shows or prime slots is pointless.

"Honestly, if you are very serious about your clothes and if you design very good clothes then you should not be talking about other things. I think it is completely pointless," he said.

Sabya also asserted that he didn't make any statement about the preference of the organisers for designers from a particular city.

"I'm from Kolkata, so I don't fit into this Mumbai-Delhi debacle that you are talking about," he said, distancing himself from a snowballing controversy.

He said that designers should not pay too much importance to the time slot they get or what shows they get.

Defending his decision to get his show sponsored this time, Sabya added, "I did a sponsored show because the cause was good. I am someone who is happy to do my own shows, because then I don't have to go through the creative controls of some corporate. I can do my own little thing."