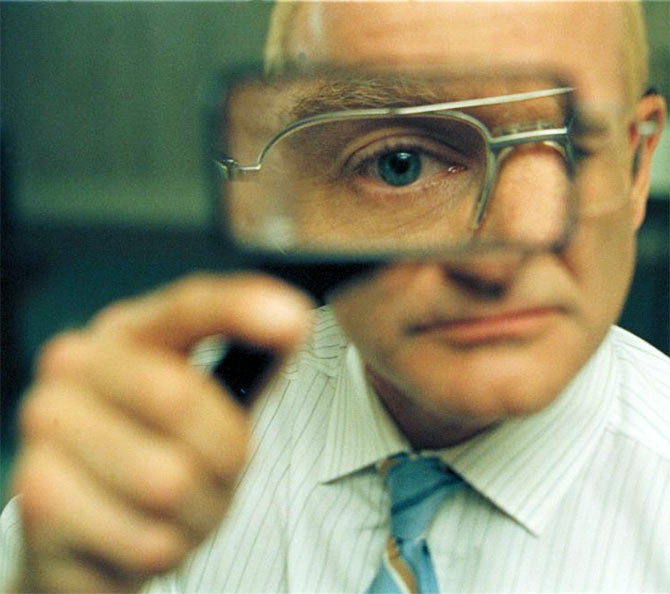 Image: Do not let depression lead you to take your life.
Photographs: A still from One Hour Photo Manavi Kapur

With increasingly stressful lifestyles, depression needs to be understood as a treatable disease and should not be ignored as a mood swing.

The actor's recent suicide couldn't have been more ironic, considering his comic roles on-screen made his audience from across the globe laugh.

How can someone who spread so much happiness be depressed enough to take his own life?

But that’s precisely how depression, the world's second most disabling disease, rears its insidious head.

Psychologists and psychiatrists believe that those who want to hide that they are depressed can do so very skilfully.

According to Samir Parikh, director at the department of mental health and behavioural sciences, Fortis Healthcare, depression is on the rise in India, mainly due to an increasingly stressful lifestyles.

With more reported cases and increase in the incidence too, the numbers for depression, especially in urban India, have increased significantly in the last decade.

Parikh cautions against cheerful status updates, and says photographs on social media can be quite deceptive.

"It's like you have a fracture today, but want to post a picture of yourself dancing at a party. It is not a reflection of your current reality."

Naveen Kumar, trustee and psychologist at Manas Foundation, a New Delhi-based registered trust that works in the field of mental health, adds that family and friends can identify early signs of depression if they are vigilant.

"It may be difficult for an individual to realise that he is depressed. But if his family and friends really observe content of his speech and the sustained differences in his behaviour, they can help him get treated," says Kumar.

Doctors recommend that even mild depression should get professional evaluation and therapy.

There needs to be awareness that depression is a treatable condition and people should not neglect or delay help-seeking, even in milder cases.

But wouldn't this lead to a situation where any minor mood swing could lead to an overreaction?

"If a low mood is sustained for a period of two weeks or more, we call it depression."

It is often accompanied by a feeling of hopelessness, negativity and a lack of will to work, leading to suicidal thoughts if not checked in time.

And while someone in a bad mood is often told to snap out of it, it can be detrimental to tell a depressed individual to will himself out of depression.

"Depression should never be trivialised with such simplistic solutions. It needs to be understood as a disease that needs proper medical attention," he adds.

The stigma attached to seeking help from mental health practitioners plays a large role in this, though the situation is improving with greater awareness.

The other hesitation is about medication.

"It's a complete myth that anti-depressants are addictive and that you need to take them for the rest of your life," explains Parikh.

Bhagat adds that the duration for medication can be as little as six months if it is the first episode of depression. But treatment must run its full course, cautions Kalpana Bapna, counsellor at Sanjivini Society for Mental Health.

"I had a 16-year-old patient who stopped her medication after a week. It was apparent within minutes of the counselling session. When behavioural changes are so evident, it emphasises the need for medication," she says.

But some psychologists say that no medication can actually alter your thoughts.

They can suppress irritability and anger, but for patients to be able to cope with negative thoughts, the treatment needs to strike a balance between therapeutic intervention with medication. Therapeutic intervention involves 'talking cures' and counselling sessions, which also advise the family and people close to the patient to understand and cope with the situation.

"We help the family see what the depressed person is going through, so that they don't blame the patient and make things worse," says Bapna.

Is help at hand?

There is a definite dearth of mental healthcare professionals in India, with a mere 3,500 psychiatrists across the country.

Both Parikh and Bhagat believe that within these numbers too, the distribution is uneven, making psychiatric help inaccessible.

Doctors recommend that counsellors and psychologists should be available at schools, universities and even the workplace to help cope with changing levels of stress and one’s expectations.

"It is ironic that employers spend so much money on pre-employment health check-ups, but pay little attention to psychological evaluation," says Parikh.

Bhagat believes that the situation can be helped through a public-private partnership and making sure that mental healthcare professionals are available at primary healthcare levels too.

Coping as a family

Bapna suggests that the family of a depressed person is equally affected by the patient’s condition.

For this, Bhagat suggests that the family should be careful not to pressurise the person or hope for magical solutions.

"The only way for a speedy recovery is through support and understanding."

Parikh also recommends that when changes in a person's behaviour -- such as loss of appetite and libido, sleeplessness and lack of productivity -- are noticed, his friends and family should not hesitate from intervening.

"One can show concern without being intrusive," he observes. But perhaps the most important thing a depressed person’s family can do is to not blame him -- this will only push him further into depression.

Some patients require anti-depressants to correct the neuro-transmittal imbalances.

"Another common myth is that these medicines make you drowsy. There are different drugs for different depressive states, including medicines that allow you to drive and lead a productive life," says Parikh.

Doctors insist that these medicines are not addictive, and patients can be gradually weaned off them. But they also caution that under no circumstances should medication be stopped abruptly, which can, in turn, precipitate the problem.

ALSO READ: 8 ways to de-stress in no time at all!

How your body clock affects your health

Is your desk job killing you?