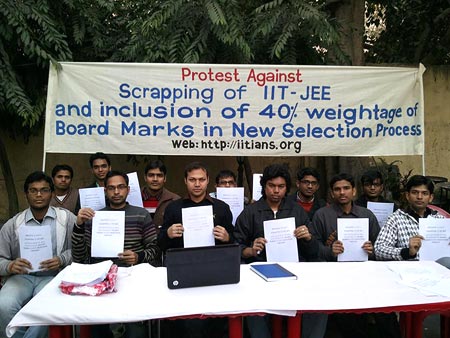 On February 14, students from IIT-Delhi, Patna and Roorkee expressed dissent for HRD ministry's latest announcement to scrap JEE and AIEEE for ISEET since 2013.

On February 14, while the world was busy celebrating the day of love, IITians all over the country had united to celebrate dissent.

These students are unhappy over the Human Resource Development ministry's latest announcement to scrap the Joint Entrance Exam and the All India Engineering Entrance exam, and replace it with the brand new ISEET or the Indian Science Engineering Eligibility Test -- a new national level exam that will test class 12 students for their aptitude for science and engineering 2013 onwards.

According to this new arrangement ISEET and board exam scores will now decide the fate of aspirants who want to join the famed Indian Institutes of Technology as well as other reputed technical institutes in India.

With the ISEET, the HRD ministry aims to scrap the purpose of multiple exams held by various science and engineering institutions in the country with a common aptitude test thus reducing the pressure on lakhs of students who prepare for these tests every year.

However, IITians across the country haven't taken the new decision too well and pointed loopholes in the system.

IITians chose to voice their discontent by organising press conferences and filing petitions to express their concerns to their respective institutes.

While students from IIT-Delhi organised a press conference on February 14, 2012, students of IIT-Roorkee filed a petition against the abolition of JEE and IITians from Patna displayed placards like 'Save IIT, Save JEE'.

Confirming the news to Rediff.com, a student of IIT-Roorkee says, "We have already filed a petition. The petition has been handed over to the director of IIT Roorkee signed by more than 1,500 IITians against abolition of JEE and inclusion of 40 per cent weightage of class 12 marks." 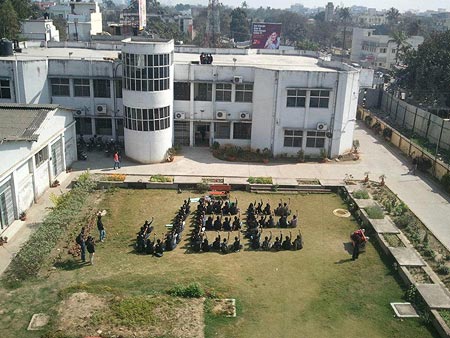 Image: Students from IIT-Patna in a JEE formation expressed their concerns on replacing JEE
Photographs: IITians.org

Interestingly, the HRD ministry website has not clearly stated the criteria for eligibility to the IITs. This is what the agenda states:

"For admission, a student's performance at School Board Examination at the end of (10+2) level will be taken into account which would not be less than 40% of the scores. Besides this school board performance, it has been recommended that some weightage will be given to the performance of a student in a Main examination, to be called as ISEET 2013 Main, and some weightage to the Advance examination of ISEET 2013. However, the weightage accorded for the performance in the school board can go over up to even 100%. The combined weightage for the Main and the Advance paper under ISEET shall not, in any case, exceed 60%. It is for the each educational institution/ State Govt. to spell out the specific weightages to the scores achieved in school Board, Main and Advance examinations."

Although the HRD ministry will announce the details of the new exam only after they meet the state authorities on February 22, 2012, it is reported that ISEET will be effective 2013 onwards.

Also the first exam will be scheduled between April-May 2013, stated the agenda report.

"It is absurd to even think of scrapping an exam like the JEE," says a final year student from IIT-Madras, who did not wish to be named.

'We really hope Mr Sibal knows what he is talking about' 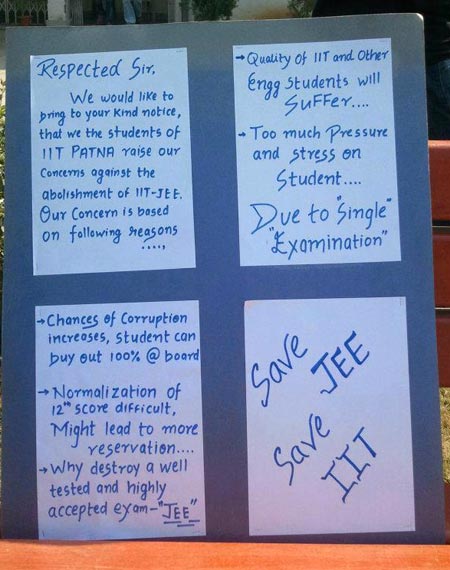 This student was very vocal in his criticism of the HRD minister for his decisions in the past.

"We really hope Mr Sibal knows what he is talking about. Isn't he happy after scrapping the CBSE board exam? Probably, he wants us to ape the West. The difficulty level of the exam is what attracts the best brains to IITs. How can he call them stressful?"

In fact, the Facebook page of IITian.org, a social networking page created by IITians across the country is loaded with pictures and messages like 'Stop corrupting IITs' from unhappy students.

But Surinder Pal Singh, general secretary academy affairs, IIT-Bombay plays down the dissent that has arisen for this exam and says that one cannot completely write off the intention of the ISEET.

Singh feels it is better to have a single test than have multiple exams as it is stressful for students to prepare and appear for multiple tests in a single stream.

"The fact that the new exam will test English skills is definitely worth appreciating," he said while explaining how the new pattern of the exam will discourage rote learning of technical concepts.

Meanwhile Vinayak Kunte, a class 12 science student from St Joseph Junior College, Mumbai and JEE aspirant feels that the ISEET will only take the heat off the technical exam.

"It doesn't make sense to test an engineering aspirant for English and language skills. We already have CAT, GMAT and a host of other exams to test candidates for their management and communication skills," says Kunte.

'State board students are always at loss with such tests' 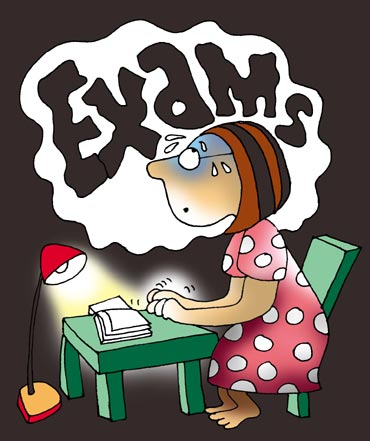 State board students will be the most affected, Amit Kumar, a final year student of integrated chemistry, IIT-Roorkee who appeared for JEE in 2007, points out.

He insists that if the government decides to include class 12 performance, it should scrap all the state boards and have a single board of examinations like the CBSE.

"It is unfair to have multiple boards and normalise a student's performance based on their variable scores and performances. Even a single mark in your board exam could bring down or advance your rank by 100 or 200 and influence your opportunity to study at IIT."

Amit felt that having one exam would not only add to the competition but also deprive state board aspirants who usually score 10 per cent lower than their CBSE counterparts.

State board students are always at loss with such tests, says Ashish Chawan, another JEE aspirant from Mumbai who has been preparing for the exam since two years now.

"CBSE students always score higher than state board exams atudents and stand a better chance of making it to the IITs. Those who did not make it through the JEE, could at least hope to clear the state level entrances, which were comparatively less rigorous," expressed Chawan who is also happy that his batch will be among the last to appear for JEE.

When we contacted teachers at JEE coaching centres in the country, most of them remained clueless over the decision while others appreciated the move as they believe it will 'reduce preparation time.'

Mumbai-based Srinivas Krishnamoorthy, who has been training students for JEE and AIEEE for the last 10 years, says he can only be 'hopeful' if such an announcement is made.

Professors feel that the JEE was a benchmark to qualify for the IITs and the new pattern doesn't quite justify the purpose.

"It is difficult to predict if the new exam will justify the purpose of JEE," says Mukund Iyer, head of Iyer's Tutorials, a private coaching centre in Chennai.

"It was hard for anyone to imagine that an exam like ISEET would threaten its future. But it seems like the new exam will test the overall personality of a student. I just hope that while doing so, they don't undervalue technical skills and aptitude of the student," maintained Krishnamoorthy.

The modalities of the exam will be finalised on February 22 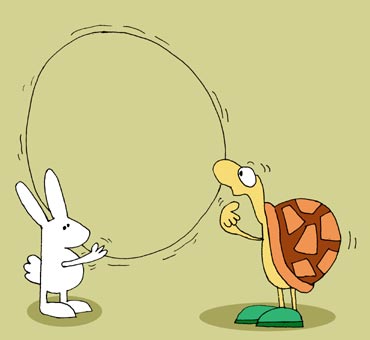 Modelled on the American Scholastic Aptitude Test, the entrance exam for undergraduate programmes in the country, ISEET will comprise two parts, Main and Advance, of three-hour duration each.

While ISEET Main will be an objective type exam, and will test comprehension, critical thinking and logical reasoning, Advance will test problem-solving ability in basic science subjects.

The two tests will together indicate a candidate's scholastic level and aptitude for science and engineering.

Touted as the nation's first common entrance test, ISEET may only cover technical institutions funded by the Centre.

At present, there are around 15 lakh engineering colleges across the country and over 150 entrance tests are conducted for admission to these institutes.

The HRD ministry would like to relieve students from the pressure of appearing for multiple tests by introducing a common entrance test for all these technical institutions. But, this requires the states' consent to the proposal for its implementation all over the country.

A decision on the modalities of the new exam will be made after the state authorities meet on February 22, 2012.