SHOCKING! Over 82% Indian IT engineers unemployable

SHOCKING! Over 82% Indian IT engineers unemployable

Next
The national employability report compiled by Aspiring Minds revealed that only 17.45 percent of technical graduates in the country are ready to be employed. What this also means is that the rest, that is, 82.55 per cent, engineering graduates are unemployable.

The survey that was conducted among technical graduates who graduated in 2011 from various parts of the country revealed that among the 5 lakh engineers who graduated last year, only 17.45 per cent are employable.

It further revealed that there are considerably more number of male students pursuing engineering and that the ratio of male-to-female engineers (1.96), is much lower than that of other countries, such as United States of America (4.61)

The report was compiled after sampling more than 55,000 engineering students who graduated in 2011 from 250+ engineering colleges across multiple Indian states. The analysis and findings of this report were based on the results of these students on AMCAT: Aspiring Minds Computer Adaptive Test, a standardised employability test.

AMCAT covered all objective parameters for determining employability in the IT/ITeS sector such as English communication, quantitative aptitude, problem-solving skills and computer science and programming skills.

'Concentrating on increasing quantity of engineers has impacted quality drastically'

The percentage of ready-to-deploy engineers for IT jobs is dismally low at 2.68 per cent

Even though India produces more than five lakh engineers annually, only 17.45 per cent of them are employable for the IT services sector, while a dismal 3.51 per cent are appropriately trained to be directly deployed on projects. Further, only 2.68 per cent are employable in IT product companies, which require greater understanding of computer science and algorithms.

There are considerably more males than females in engineering, but with equal employability

Concentrating on increasing quantity of engineers has impacted quality drastically

With regard to employability percentage in different states, it was found that employability decreases logarithmically with the number of colleges in the state (in sync with Arrow's hypothesis). This clearly shows that opening more colleges is directly impacting the percentage of employable engineers graduating every year.

The quality of education varies drastically, with only a very few colleges at the top of the quality ladder

It was found that Business Process Outsourcing sector topped the employability ranking with 40.69 per cent.

Hardware networking followed next with 36.57 per cent and IT services employing 17.45 percent of graduates.

Other sectors like IT product and knowledge process outsourcing showed employability less than 10 per cent. 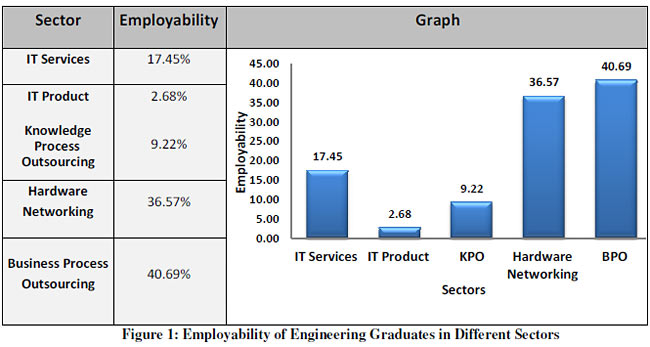 The report analysed the gender-ratio changes with respect to the state of the campus.

It was found that employability for males and females is almost equal across sectors. It also revealed that the opportunities were also the same for both.

This shows that when higher-level skills are required (English, in case of KPOs and technical ability in case of IT Products), there is a larger variation between talent quality in tier 1 and tier 2 cities.

Data further revealed that at least 12 per cent of engineers (approx 13,000) employable in IT services are in tier 3 cities. 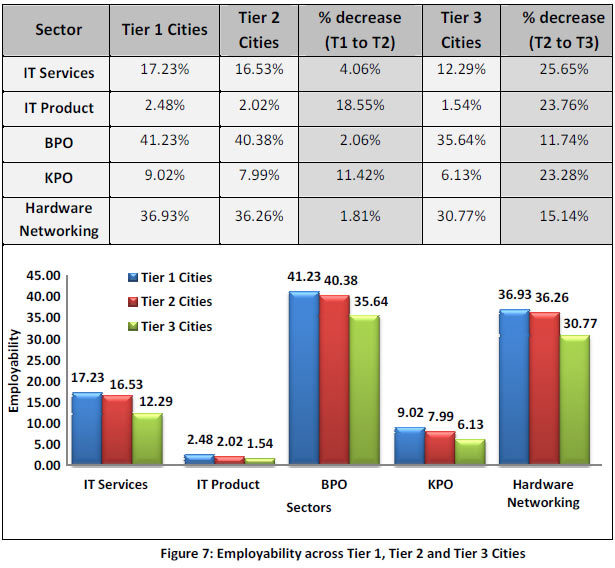 The report revealed that employability in IT services companies is highest in North, followed by East, then West, and then South.

The states of Delhi and Bihar-Jharkhand showed highest employability. 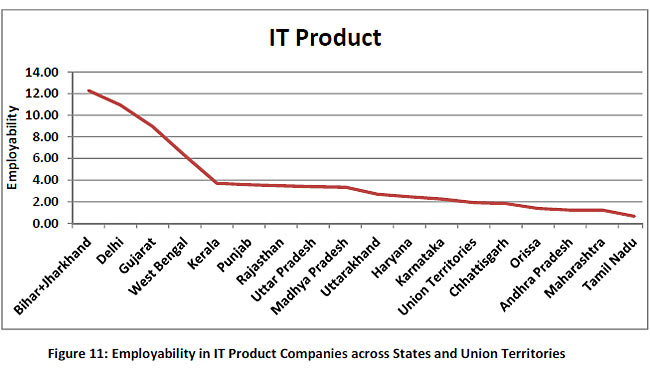 Employability in metros vs non-metros

Even though colleges in non-metro cities have lower employability, the difference is not much.

Only the decrease in employability is much higher for which English comprehension and writing skills are very important.

Image: Employability in metros vs non-metros

Number of engineering colleges vs population

The report stated that the proliferation of engineering colleges in southern and western India has brought down the employability figures.

In comparison, there are far fewer engineering colleges in Delhi and Kolkata.

This is despite the fact that the population of Delhi is much more than Southern cities being comparable to that of Mumbai. 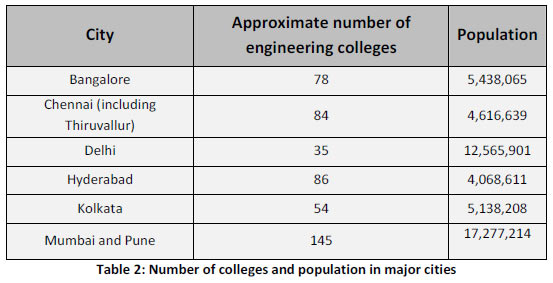