Sign in  |  Create a Rediffmail account
Rediff.com  » Getahead » Rescued from a dustbin, preparing to be an IAS officer 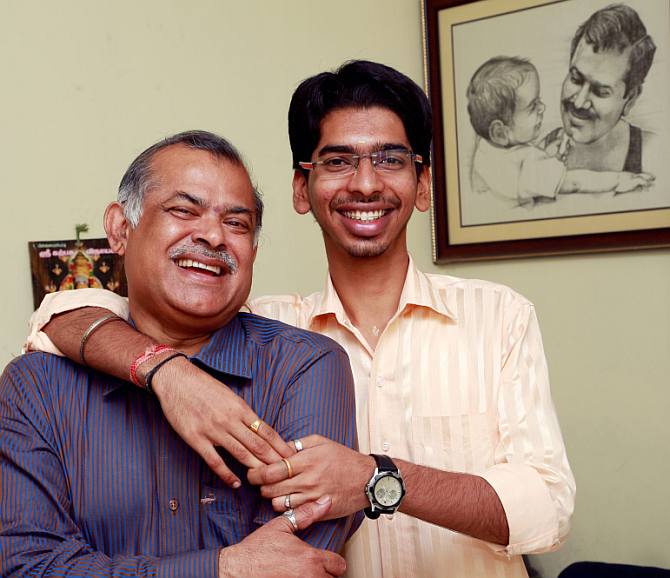 "The desire to become an IAS officer came after I read inspiring stories about some IAS officers. I thought I would be able to do the work Papa is doing more effectively if I were to become an IAS officer. What Papa does is help the abandoned and the poor; I just want to follow in his footsteps. I want to dedicate my life to others. If Papa had not picked me up from the dustbin, I would have died, choking in the bag. If I can do at least a fraction of what he does, I would consider my life worthwhile. I don't want this life given to me to go to waste!"

March 7, 1994. 20 years have passed since that day, but Vidyakar, the man behind Udavum Karangal, still remembers the day vividly. It was in the morning that a stranger called to inform him that a bag had been found inside a dustbin near a drain in Anna Nagar, Chennai. It was not just any bag, though -- it was a bag with a baby inside.

Such calls come quite often to Udavum Karangal. So, without wasting any time, Vidyakar rushed to the spot on his scooter. But as he couldn’t locate the bag, he went back home. In no time, the same person called him again, as if he was watching from somewhere and wanted Vidyakar to rescue the baby. 'I know you came but couldn't find the bag.' He gave some more landmarks so that Vidyakar wouldn’t miss the bag.

Vidyakar went back to the same spot and this time, he could find the bag. It was closed.

When he opened it, he found a newborn baby gasping for breath and frothing. The umbilical cord of the baby was not tied and there were ants all over its body, feeding on its tender skin. He rushed the baby to a nearby hospital, and in two days' time, the baby was ready to go back home; home for the baby was Udavum Karangal, as it was for countless other abandoned babies.

One thing that struck Vidyakar then was the clothes used to drape the baby, and even the bag used. "From the look of it, it was clear that he was not from a poor family. The towel used clearly gave away the fact that he was from an affluent family. The location also was quite affluent. Though I have rescued many babies over the years, it is always a painful experience to see abandoned babies," Vidyakar went back in years.

Vidyakar named him Abhilash Vidyakar (all abandoned babies at Udavum Karangal have the surname Vidyakar, as he is 'Papa' to all of them). "What I name a child has to do with what the child means to me when I find him or her. There is always a reason behind the name I choose. Even after thirty years, the name should remind me of our connection. Abhilash means a wish, a desire..."

In no time, Vidyakar noticed that Abhilash was an exceptionally brilliant and creative child -- a "special child".

When he was 10, Abhilash learnt that Papa Vidyakar had picked him out of a dustbin. 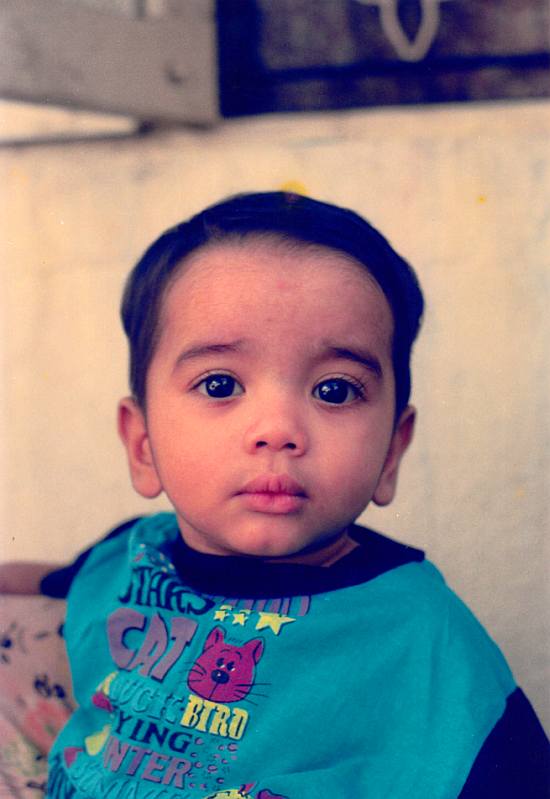 Image: Abhilash Vidyakar when he was a kid
Photographs: Sriram Selvaraj Shobha Warrier

Till then, he was happy playing with the other kids at the orphanage. Only when he was sent to a private school that he realised he was different from the other kids. He saw parents dropping children off at school and mothers coming in the afternoon with lunch and feeding their children lovingly. At the same time, he came in a van from the orphanage, never had anybody feeding him lunch. While his friends narrated stories of their parents, he had no such stories. It was the resultant sadness and dejection that triggered his desire to search for his roots.

"I started searching through Papa's files and found, completely by chance, my file with a photo of me as a baby in a travel bag. It was not sorrow or anger that I felt when I saw the picture. I felt blessed that I had a Papa who gave me shelter and took care of me. He brought me up like his own son. What more can I ask for?

My parents might have abandoned me in a dustbin. But Papa picked me up from there and gave me life. So instead of shattering me, the truth behind my origins made me feel calm and peaceful."

Not even once did he feel like searching for his own parents. "I don't even think of my biological parents. Why should I think of those people who never bothered about me? I think of my Papa and nobody else."

Yet, there were moments when he thought of his mother and wondered why she abandoned him. At these points, he tells himself that she perhaps had some compelling reason to do what she did.

"Otherwise, would any mother abandon her newborn baby?"

Like any other child in similar circumstances, he was flooded with questions to which he had no answers. "Sometimes I used to think, why is it that I don't have a family when all the other children in school have. Then I told myself that Papa was my father, mother, and my family. But I haven't told any of my friends in school or college that I am an orphan. I fear that they will then abandon me just as my parents did."

One question that Vidyakar faces from many kids is, "why did you pick me up out of the garbage? You should have let me die there. I tell them that life is precious. Whenever a child asks such questions, I sit them down and talk to them so that they don't become angry and vengeful. Many start hating women because they hold only their mothers responsible for abandoning them. It is an emotional process for all abandoned children; one that starts as early as the age of 7 or 8 for many. If they go through that and come out of it successfully, they will be successful in life too. Otherwise, they shy away from building relationships." 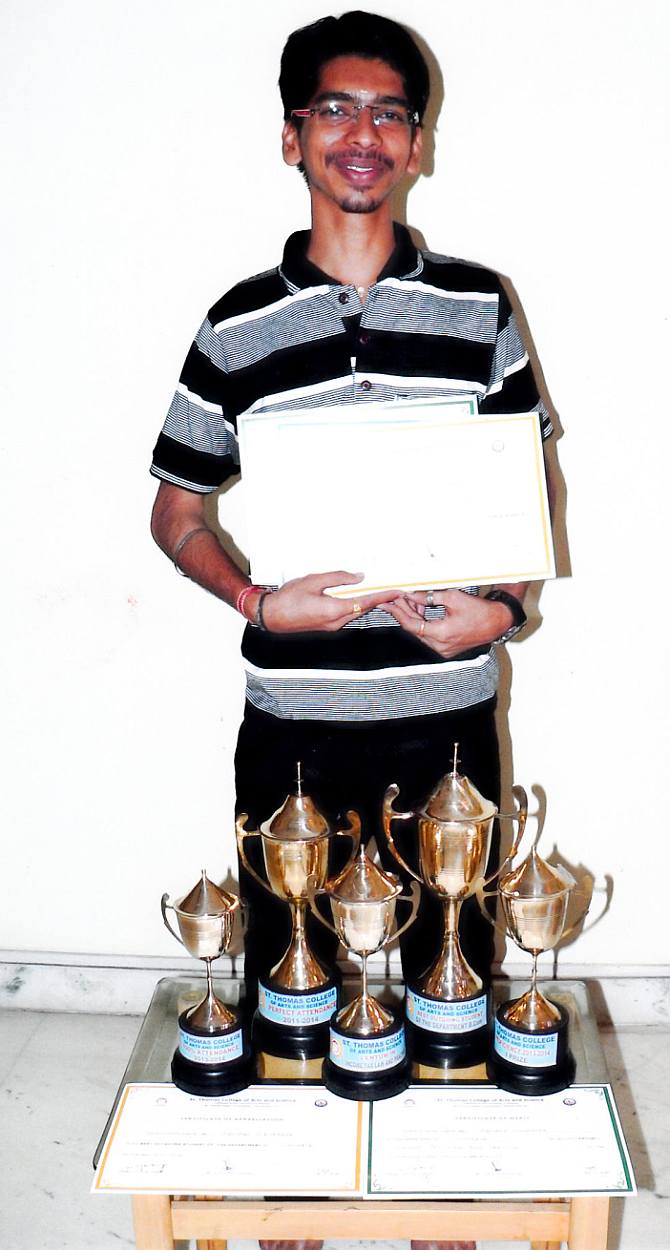 But Abhilash was different. Not once did he ask his Papa why he rescued him. "I know what he has done and how valuable life is. I know how caring he is to the suffering."

That is why on his birthday, March 7, Abhilash always thanks his Papa first. Only after that does he pray. He says that he has never asked for anything for himself. "I have only asked for Papa's good health so that he can continue to care for orphans. I also ask God to give me the courage and willpower to help the underprivileged in our society. That is my only prayer! On second thought, I would say, Papa is my God, a God that has taken human form."

Abhilash was a well behaved, very focused and an extremely good student. That led Vidyakar to send him to a private boarding school in Coimbatore. He also wanted to get the boy away from the institutional atmosphere of the orphanage.

True to his potential, Abhilash was a recipient of a scholarship throughout his school and college days and scored excellent marks. In college, other than topping the college, he won many inter-collegiate competitions, and also received awards for Perfect Attendance and being the Best Outstanding student.

Having studied Commerce, his initial desire was to be a Chartered Accountant. But he now wishes to prepare for the Civil Service Examination and become an Indian Administrative Service (IAS) officer. Though many children from Udavum Karangal have become engineers and bankers, it was for the first time that a child from the home is trying to become an IAS officer.

"The desire to become an IAS officer came after I read inspiring stories about some IAS officers. I thought I would be able to do the work Papa is doing more effectively if I were to become an IAS officer. What Papa does is help the abandoned and the poor; I just want to follow in his footsteps. I want to dedicate my life to others. If Papa had not picked me up from the dustbin, I would have died, choking in the bag. If I can do at least a fraction of what he does, I would consider my life worthwhile. I don't want this life given to me to go to waste!"

It is now Vidyakar's dream also to see Abhilash become the first IAS officer from Udavum Karangal. "More than that, I want him to be a good human being who cares about society. He is a go-getter and a hard worker. So, I am sure he will get there!"

Abhilash admitted after a long pause that by becoming an IAS officer, it was his wish to show his mother and father, wherever they are, that despite their having abandoned him, he had achieved something in life. He also wanted to tell the world that there are people like Vidyakar -- who make IAS officers out of orphans picked up from dustbins!