Rifath Shaarook, the boy who built the world's lightest satellite

The lead scientist on the project, which was launched by NASA, is also the youngest at 18.
Nikita Puri meets the boy from Tamil Nadu who is already working on his next mission. IMAGE: Rifath Shaarook used to spend hours watching the space through a telescope with his dad. He has been interested in space technology for as long as he can remember.
Photograph: @CubesInSpace/Twitter.

In the early 1960s, rocket scientist and former president APJ Abdul Kalam was part of a seven-member team at the United States space agency NASA's launch site in Virginia. Decades later, a satellite named after him was launched from the same site: at 64 gm, KalamSat is the world's lightest satellite.

The launch last month was also significant because this is the first time that a satellite's structure was completely 3D printed with reinforced carbon fibre polymer.

Moreover, the oldest on the team of six behind this satellite is 21. The lead scientist on the project, Rifath Shaarook, is the youngest at 18.

Since the satellite's launch, Shaarook has been the subject of many news stories. All of these paint him as a one-man army.

"How can anyone make a satellite on their own?" asks Shaarook, insisting his team members be given due credit. IMAGE: Though the news reports on KalamSat have mostly been about Shaarook, he asks "How can anyone make a satellite on their own?"
The team was mentored by Dr Srimathy Kesan, center.
Photograph: @rifath.sharook/Facebook.

For the past four years, these young minds have been working on rocket and space technology under the mentorship of Chennai-based Srimathy Kesan. Kesan is the founder and chief executive officer of Space Kidz India, an organisation that seeks to provide a platform for children who have a "madness for technology".

When Kesan's team of students won a contest organised by NASA and an education company called I Doodle Learning, they realised that if successful, they'd go down in history for proving that one could look beyond "space-grade metal" to build satellites, thus bringing down costs.

While Shaarook is from Karur in Tamil Nadu, the rest of the team is spread out in different cities.

KalamSat is the result of Kesan's students logging on to Skype every night for four years, between 11 pm and 4.30 am, and discussing the work to be done. Whenever they had to work together, they would gather in Kesan's house in a makeshift lab. Shaarook has been interested in space technology for as long as he can remember.

"My dad was also a scientist'. He'd do independent research on astronomy. We'd spend hours watching the space through a telescope," he says.

His father, Mohamed Farook, passed away when Shaarook was in Class V.

While adults think about what "others would say if this mission fails," Kesan believes "children are more courageous. There's a big difference in their attitude."

KalamSat was launched on a sub-orbital spaceflight, meaning it wouldn't stay in space long enough to complete one orbit around the Earth: only satellites launched on orbital flights can do that.

"I tell him over and over again that we should be content with sub-orbital launches for now, and he enthusiastically says 'okay Ma'am'. But the moment we finish talking, he turns around and asks, 'Ma'am, can we do an orbital launch?'" says Kesan.

The child-likeness in him, she says, is only equal to the single-minded dedication he has towards space technology.

A satellite is sensitive to the slightest of shakes, so great care had to be taken to ship KalamSat to NASA's site.

When the authorities were waiting for Space Kidz to hand over the package to them, Shaarook turned around and asked Kesan if he could have a plate of rasam, rice and potato curry to calm his nerves.

"Can you believe that?" says Kesan, "Even extremely talented people have their quirks."

"We are happy, but we really don't want to waste time on celebrations. We are already working on our next mission," says Shaarook. "That should remain a surprise for now."

Don't miss: These Indian students are aiming for the sky 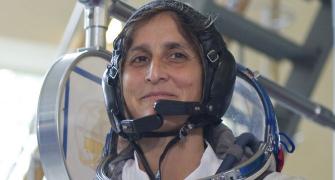