From one of Kashmir's worst trouble spots, Adeeba Tak emerges as a story of hope.
The 17 year old has won a full scholarship to an Ivy League university in the US.
This August, just as the apple season starts in her native Shopian, Adeeba will make her way to study mechanical engineering at the University of Pennsylvania.
Rediff.com's Archana Masih finds out why her story is special. 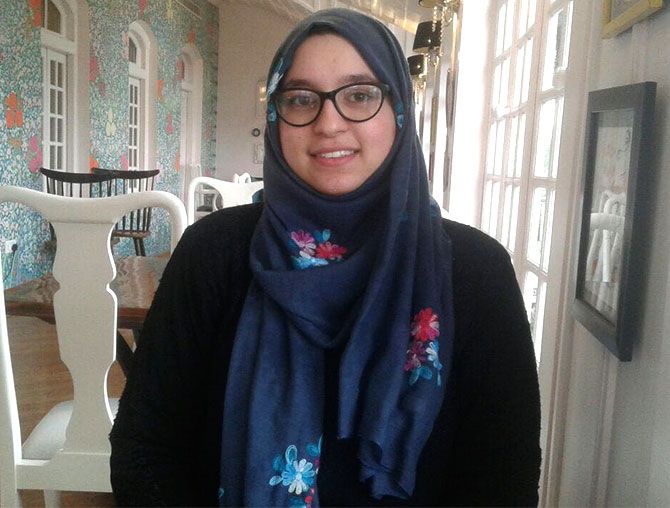 It was 4.30 am in Srinagar as Adeeba Tak, 17, opened her e-mail with baited breath, her anxious mother leaning over beside her.

The e-mail said she had been accepted at the University of Pennsylvania with a full scholarship. The teenager who had never thought of a foreign education till two years ago was overjoyed.

Two years ago, her mother and she moved to Srinagar from their home in Shopian, the troubled district in south Kashmir, so that Adeeba could attend coaching classes for the IIT entrance examination.

It was at the Rise coaching institute that she first heard of SAT, TOEFL, the Math Olympiad. As she prepared for the IIT, she heard about a senior at Rise who had got admission to Princeton.

Adeeba wanted something like that and started working on the application process under the guidance of the teachers at the Rise coaching academy, which is run by three IIT graduates.

Since the big news of her admission came in the wee hours of March 29, nothing has quite been the same.

Adeeba called her father in Shopian, an employee in the forest department; she informed her teachers at the coaching academy and friends.

In troubled Kashmir, this was very good news, just as it should.

"I got so many calls. It was the feeling of celebrity -- I can tell you. Life has become pretty eventful," says Adeeba, in a confident voice over the phone from Srinagar.

In the middle of August she will leave for UPenn for a degree in mechanical engineering.

Since the admission, she has received a lot of queries from students about how she went about her application.

Her school in Shopian has invited her to speak to students, says her proud father Naushad Tak.

"She would travel 52 km to Srinagar in a Sumo taxi three days a week for coaching before moving there so that she could be near the institute," he says over the phone from Shopian.

Discussing her admission, Adeeba says she gave her 100 per cent to the application.

"Be honest. Don't hesitate to show your emotion -- that is what strikes the admission officers the most," she says.

"If you are writing about a problem -- because every person faces problems -- you should write how it affected you and helped your growth as a person."

"Admission officers look for those sort of things. You should also include things that are most important to you like sports, public speaking, or school elections," she says, providing tips about the college essay which is a clincher in securing admission and scholarship.

Confessing to being a studious night owl, Adeeba likes writing and cooking, but she says studies have pretty much taken most of her time in recent years.

"I make a fairly good Rogan josh," she giggles and plans to catch up on missed movies and television shows before leaving for the US.

Adeeba began working on her application last summer. Her academic performance in her boards was excellent; she stood first among 7,000 students to secure admission in the Rise institute, but she had her share of difficulties.

The significant difficulty she faced was growing among stereotypes in a conservative society.

"When I first wanted to become an engineer, some of my teachers in Shopian were discouraging. You can't cope with advanced mathematics in Class XI and XII, they said."

"Then Rise happened. They told us about IIT and other opportunities out there which encouraged me -- and I decided I won't let my gender decide my passion."

Mubeen Masudi, an IIT-Bombay graduate who started the academy in 2012, says Adeeba is extremely hard working.

"She doesn't give up in spite of the social challenges, the academic difficulties or political uncertainties in Kashmir," says Masudi.

In 2016 when Kashmir was reeling under violence, Adeeba's school was shut for six months. She also lost her grandfather at that time. But she continued to study at home, downloaded video lectures from Rise, spoke to the tutors over the phone.

"It takes extra effort from us compared to students from other parts of India. They have Internet available -- all day, all year. Their schools and coaching classes go on uninterrupted throughout the year, we don't have all this," says Adeeba.

"All people talked about was death and destruction and these students who were in the crucial years of Class X-XII were supposed to study in that environment without being in contact with their teachers or student friends," adds Masudi.

"The situation in south Kashmir (where Shopian lies) is very bad. In addition to that the education system has deteriorated in the in the last 20, 25 years," says Masudi whose small team of four provides counselling in schools and has started a digital literacy project in Sopore so that girls can create Web sites and mobile applications at the end of a 4-year training.

"Life was awful at that time as you can imagine with schools shut," says Adeeba. "Our friends we would confide in each other and we made it through that all. We always do."

A huge admirer of former scientist-President A P J Abdul Kalam, she says she has no role model apart from her mother.

Her mother, a college graduate who did not get an opportunity to study further in the conservative society of Shopian, taught both her daughters to be independent and decide their own fate.

In the months before she goes off to study in America, Adeeba wants to travel in India and spend time with her family.

"When I reach the US, I'll treasure those moments the most," she says with a laugh. Meanwhile, as summer brings in tourists to Srinagar, she was going out to meet cousins after the phone conversation.

There was another thing to do -- get her ears pierced.