News
Business
Movies
Sports
Cricket
Get Ahead
Money Tips
Shopping
Sign in  |  Create a Rediffmail account
Rediff.com  » Getahead » Will you kiss in Kochi too?

A group of young women and men have had enough of moral policing in Kerala.

On Sunday, November 2 they plan to meet at Kochi's Marine Drive and stage a somewhat unique protest that involves... kissing. 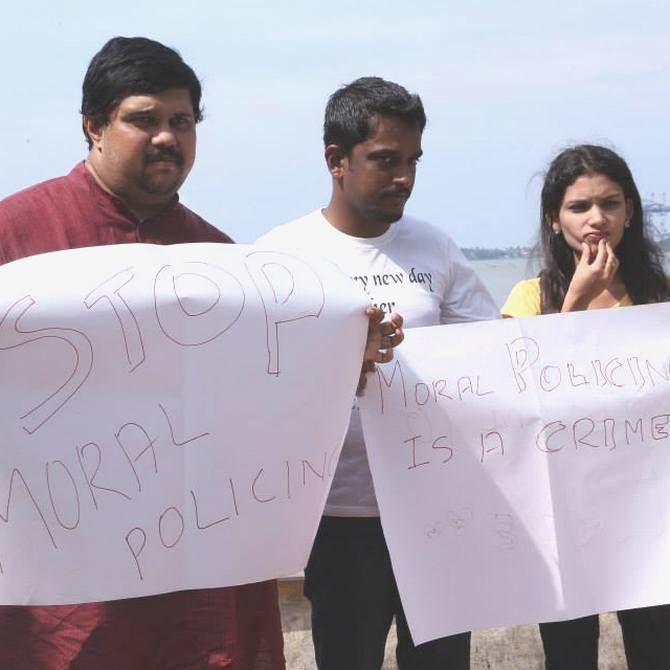 If Rahul Pasupalan has his way he will lead a gathering of protesters on Sunday, November 2 at Kochi's Marine Drive.

There won't be any speeches, he says, no singing or dancing.

"Just a bunch of us holding placards protesting against the moral policing in Kerala," he says over the telephone.

This is a far cry from what we've read so far about the protests.

That there would be people kissing (gasp!) in public (gasp! gasp!).

The whole thing seemed such a great stick-it-to-the-man exercise that it didn't take too long for the protest's Facebook page to go viral.

However, when we spoke over the telephone, three days before the intended protests, Pasupalan, who makes short films, made it sound like just another protest.

It was only several minutes into the conversation that he said, almost hesitantly: "People may want to kiss. If they want to show their kiss as a symbol of protest they may do so."

And in the same breath he added: "We are not exhorting people to kiss."

Pasupalan's apprehensions are not out of place.

Indian laws regarding 'obscene acts' are vague enough to land you in trouble.

Under section 294 of the Indian Penal Code, those causing annoyance to others through obscene acts can be imprisoned up to three months or fined or both.

Since 'obscene acts' are not defined by law, it gives vigilante groups enough scope to harass those who don't fall in line with their worldview.

Even Hollywood star Richard Gere wasn't spared. In 2007 he found himself on the wrong side of the law when he kissed Shilpa Shetty at a public event in New Delhi.

Even so, Pasupalan points out that the couples kissing and hugging needn't fear immediate arrest because the police cannot take action till someone files a complaint.

"We consulted a senior lawyer about it," he says.

Pasupalan points out that most cases of moral policing happen on a significantly small scale -- a couple harassed somewhere, a homosexual person wrongfully jailed -- and often go unnoticed until something big occurs.

That big thing happened last week when a cafe in Kozhikode, 180 km from Kochi, was vandalised by members of the Bharatiya Janata Yuva Morcha, a youth organisation affiliated to the right wing Bharatiya Janata Party.

Which is when Pasupalan and some others decided enough was enough.

But if you really look back, it all started with a news report.

"A few restaurants and coffee shops in Kozhikode," the young newsreader on the Congress party-promoted Jai Hind TV earnestly says, looking at the teleprompter, "are turning into hotspots for immoral activities."

The reader, probably in her 20s, is presenting the 9 am news on Thursday, October 23. She goes on to lament "these new generation restaurants" that do not seem to "differentiate between day and night" and that seem to be running "without the awareness of lawmakers".

Throughout this monologue, a band at the bottom of the screen declares: 'Coffee shops and new age restaurants are becoming a hub for immoral activities in Kozhikode.'

This, we are told, is 'Breaking News'.

The 90-odd seconds report then switches to out-of-focus visuals of a group of young, presumably college students enjoying a meal in the air conditioned section of popular cafe, a couple walking over to a table under a pink umbrella, a repeat of the college students' group shot, another shot of the couple now sitting at the table under a pink umbrella, and multiple shots of a young couple smooching.

This is then followed by some shots of a couple taking a selfie, another young group having a meal... and we are treated yet again to more footage of the unnamed canoodling couple.

The couple under the pink umbrella get up to leave, a young boy settles down at a table with his group of (what seems like) male friends, the girl of the selfie couple ruffles the hair of her male friend, and we are back to some more visuals of the kissing couple that seems unnecessarily blurred given the poor quality of the video.

Somewhere in the middle of all of this is a shot of an empty parking lot apparently belonging to the restaurant that, as a male voiceover helpfully informs, is the breeding ground for drugs and other immoral activities.

Even though the report is purportedly about 'new generation restaurants' that 'lure' college students with free Internet and that have become the hub for all 'immoral activities', the visuals focus exclusively on one particular café, a standalone one called Downtown Cafe.

The report ends with a call for action: "If this is not stopped," the reporter says in a piece-to-camera, "We will have a generation of people who won't follow the rules."

On the same day, a little before noon, Mohammed Thensheem, manager of Downtown Cafe stood outside the restaurant as his cleaning staff completed their job.

He had no clue about the report because he, like most people who have a job, never watched the 9 am bulletin.

"We open (for business) at 12 (noon) so two-three of the staff members report earlier to get the restaurant in order," Thensheem recollects.

"I was standing outside the restaurant while it was being cleaned when I suddenly heard commotion."

Everyone knows what followed. Because someone had helpfully informed news channels in Kozhikode that they would get something newsworthy at Downtown Cafe.

So, as the men with BJP flags go about trashing everything in sight -- the cafe's glass facade is the first victim -- more than a few news cameras gleefully follow the vandals.

The attack, Thensheem says, could not have lasted for more than five minutes.

"They just came, broke things and left!" he says.

The vandals from the Bharatiya Janata Yuva Morcha had apparently watched the 9 am news.

And they were offended enough to carry out a made-for-TV act of vandalism.

The politics of the case aside (BJP vandals reacting to a poorly-produced report, part of a morning bulletin on Congress-run channel), it was the last straw that led Rahul Pasupalan and others to raise their voices.

Although the protest's Facebook page has received over 39,000 'likes' at the time of filing this report, Pasupalan isn't expecting a big crowd.

"Five hundred at best," he says when I ask him how many people he is expecting on Sunday.

"Most of them will be under 35 but we are also expecting some slightly older people." 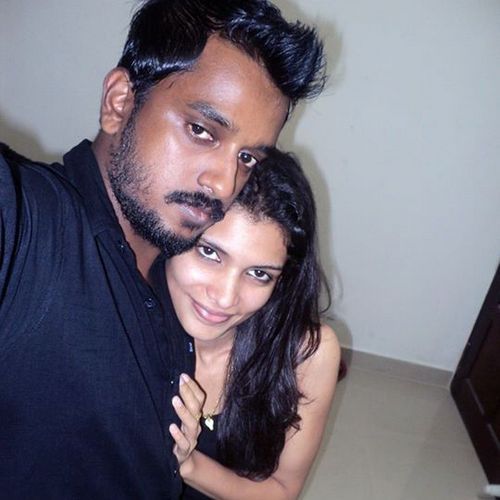 Pasupalan also feels that moral policing isn't a generational issue or even an ideological one. And he says that the reason he is starting the series of protests (he plans to take it to different cities) in Kochi is because "the issue isn't just restricted to Kozhikode."

"Moral policing stems from the lack of opportunity. It stems from the attitude that if I am not getting it, no one else should either," he says, chuckling at his own joke before going off on the all too familiar tangent of Indian culture's relationship with matters of sexual conduct.

"Look at Ajanta, Ellora, Khajuraho. We had the Kama Sutra..." he says.

Despite all these arguments, Pasupalan and his ilk have found themselves in a minority, fighting with their backs against the wall.

Kochi Police has rejected Pasupalan's request to allow them to gather at Marine Drive for the protest.

Nishanthini R, Deputy Commissioner of Police (Law & Order and Traffic), whose office turned down the request said they did so because they had received too many protests against the gathering.

"We were afraid it would lead to a possible law and order situation," she said over the phone from Kochi.

This is not stopping Pasupalan from going ahead with the protest.

He says: "We haven't as yet been formally informed (of the rejection). But even if the request is turned down, we intend to carry on."

The law, though, is probably the last thing the organisers of Kochi's Kiss of Love should be afraid of.

Only days ago, while they were addressing the media at Marine Drive, Pasupalan and five others were roughed up by two goons who also destroyed their placards.

The police had to intervene for the press meet to continue.

The idea of the press conference was to clarify the 'misconceptions' about the event.

Even as the date for the protest draws closer, Pasupalan and the organisers seem to be warding off all sorts of criticism.

On October 30, they released a somewhat long-winded explanation on Facebook that sought to make the protest more inclusive, urging 'we the people, parents, siblings, couples, come out and show that there is nothing wrong in expressing our love to our loved ones through hugs or kisses in public.'

And in perhaps a twist of irony, they also sought to rationalise their stand just as comically as the right-wing fundamentalists they are protesting against:

The note on Facebook reads: 'Our literature and poetry has celebrated the expression of love. One of the earliest recorded instances of a kiss is in the epic Mahabharatha (where Rishyashrina kisses Vaishali). In fact some anthropologists believe that kissing originated in India and it got passed on to the rest of the world when Alexander came here with his army.'

A kiss is clearly not just a kiss anymore. 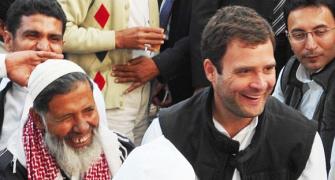 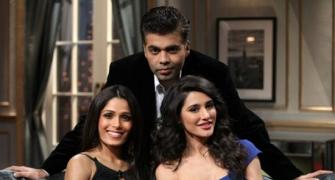 Nargis and Freida on Koffee With Karan were EXTREMELY RAUNCHY

Factory activity expands at a modest pace in Oct 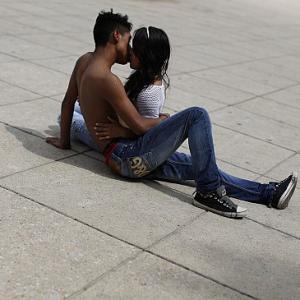 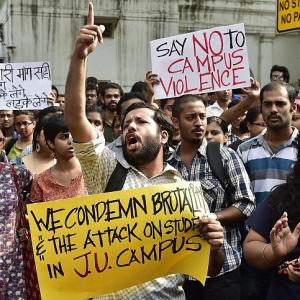