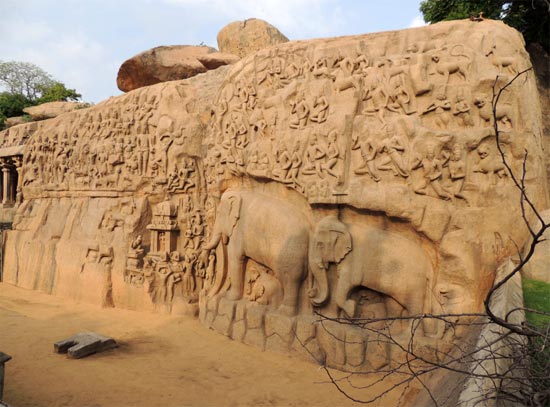 Rediff reader Sharda Crishna writes about her travel to Mamallapuram.

Call it the 'Descent of Ganges' or 'Arjuna's Penance' as you will, but the largest open-air bas relief of the world stands bright in the morning sunshine at Mamallapuram!

Mamallapuram or Mahabalipuram as it is known is a coastal town 60 km away from Chennai. Endorsing the artistic prowess of the sculptors of the great Indian civilisation in Mamallapuram, are many historic rock-cut and monolithic monuments. The most exotic of these is the bas-relief rock dating back to 7th century CE measuring 96 by 43 feet.

This extraordinary piece of art created by artisans of yore has been done by chipping away at a rock delicately so that figures are just barely raised against the overall flat background. And oh boy, how well do they stand out!

An exemplary poem on stone

Yes, the debate on whether the story depicted on the bas-relief is 'Arjuna's Penance', or the 'Descent of Ganges', is an ongoing one. As per one view, the depiction is of Kiratarjuniya, meaning, the hunter and Arjuna. Kiratarjuniya, a mahakavya in the class of Kalidasa's Raghuvamsa written around the sixth century, is the story of Arjuna encountering Shiva during exile.

Arjuna performs penance in a Himalayan forest in order to propitiate the gods. He wants celestial weapons to overcome the Kauvravas and regain the kingdom that lawfully belonged to the Pandavas. Appearing in the guise of a hunter, Shiva quarrels with Arjuna over the shooting of a boar and tests his courage in several types of combat. Shiva ultimately reveals himself and grants Arjuna the boon of powerful Pasupatha, a laser guided weapon in today's parlance.

The author works for a pharmaceutical company crisscrossing India's length and breadth that provides her with an extraordinary opportunity to observe India's diversity and beauty and struggles and successes of her people. Don't miss her travel piece on the sun temple at Konark here. 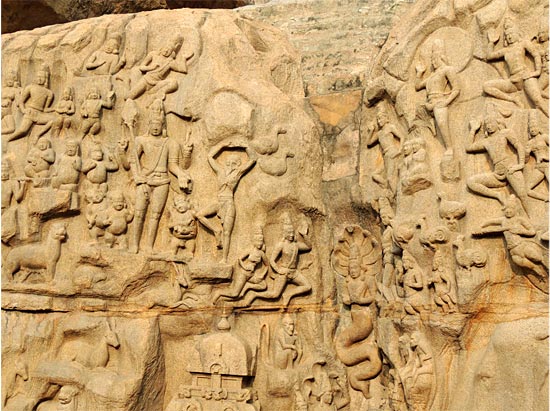 Shiva and the Boon of Pasupatha, the Laser guided Weapon

Shiva above is shown holding the Pasupatha in his right hand and his left hand is in the gesture of granting a blessing. An emaciated Arjuna (see the detailing of ribs) stands on one leg with arms upraised, seeking the blessings of the lord. The five dwarf ganas near Shiva are said to represent the five elements -- air, earth, water, space and, fire. The dwarf between Shiva and Arjuna is supposed to be Pasupatha personified. Apart from the protaganist Arjuna the top left panel shows a number of trees, birds, horses, deer, lions and kinnaras or celestial musicians who all resided in the Himalayas in harmony.

Vishnu Shrine and the Pallava Kings

For most part, the bottom left panel is uncarved. Below Shiva and Arjuna, there is a shrine of Lord Vishnu, with a sage, a buck and his doe, horses and a lion, many seated in caves. The finely chiseled deers, with one touching its nose with hind right hoof and other behind are so lifelike that a highly impressed Mrs Indira Gandhi ensured that they appeared on the ten rupee notes of that time. The three headless figures below the Vishnu shrine are said to be the Pallava kings. The figure with a band across his waist and legs is said to be Narasimhavarman I or Mamalla, the Pallava king after whom the city is named and the two headless figures seated at a higher pedestal counselling him, are his father and grandfather, Mahendravarman I and Simha Vishnu. It is believed that in the subsequent conflicts between various south kings, the heads of the three Pallava kings were decapitated. 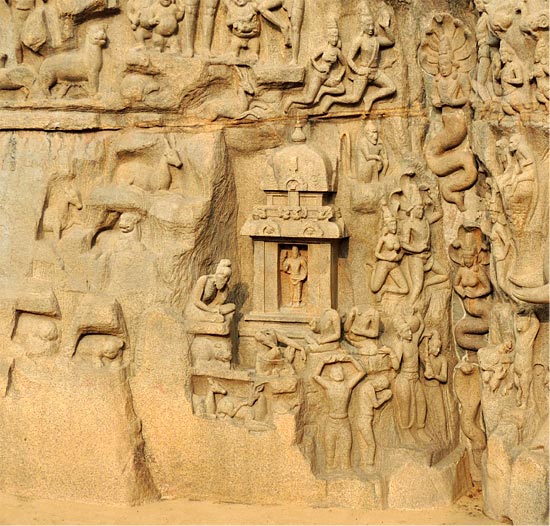 A collecting chamber above appears to have created an artificial waterfall along a natural cleft that divides the rock into two halves. Near the Vishnu shrine on the left panel is a monkey king and carved out in line in the fissure is said to be the snake princess Ulupi, one of the queens of Arjuna.

Below the shrine is a man facing the river, standing on ankle deep water and bowing down. Another appears to be praying with his arms raised. Yet another, is shown with a pot of water while another close by, is wringing out water from garments. The natural cleft separating the monolith is believed to represent the flow or descent of the Ganges to earth. All the figures of animals, men, women and celestial beings are shown either facing this cleft or approaching it with great energy and enthusiasm. 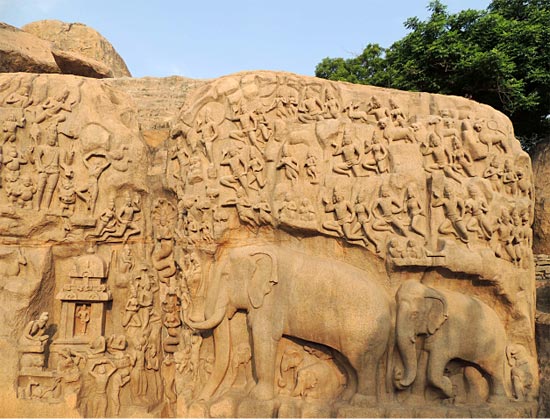 Finest Carvings of an Elephant Herd

On the left top above Shiva is Chandra, the moon god, and on the opposite side is Surya, the sun god. Apart from Surya, there are kinnaras, sages, flying gandharvas and bhuta ganas. Adjacent to the cleft on the right is the depiction af a panchatantra tale with a cat doing penance with hands raised with a group of gullible mice closeby. The lower right panel has huge elephant carvings. The largest one and the one close to the cleft with
bifurcated tusks is believed to be Airavata, Indra's vahana.

The other viewpoint regarding the bas relief is that the depiction is of King Bhagiratha who did a grueling penance to bring the River Ganges from heaven to earth to purify the souls of his ancestors. It is said that the whole world became curious of the incident and gathered around to witness the event. The carvings done on the massive monolith seem to support both the stories.

A World Heritage Site Since 1984

The sheer beauty of this magnificent bas relief made by men with great artistic proclivity 1300 years ago fills one with awe and admiration. There were some brilliant men here, right then! The liveliness and naturalism of the sculpted figures stand as proofs of their outstanding skill! The vivaciousness and vitality of the creation put a new bounce in my step and the beautiful figurines had me humming the song Taareef Karoon Kya Uski,
Jisne Tumhe Banaya while returning back to Temple Bay Hotel

Mahabalipuram or Mamallapuram is around 60 kms from Chennai and is well-connected by road and rail.