Sign in  |  Create a Rediffmail account
Rediff.com  » Getahead » 6 crucial things to remember while on a trek or a picnic 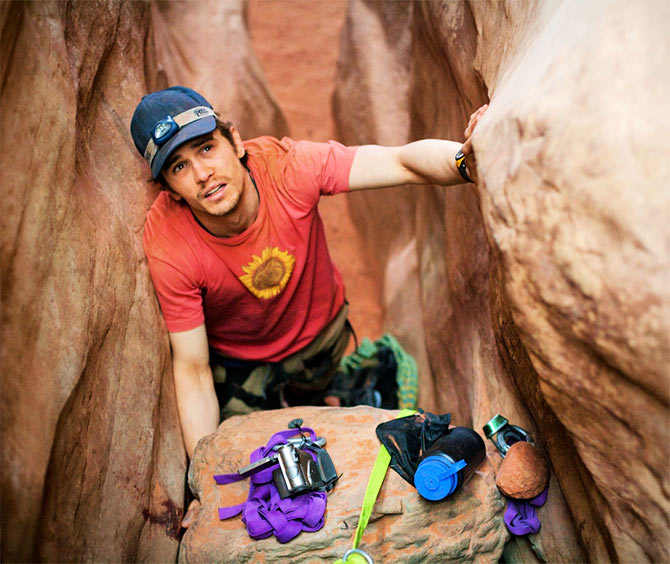 Image: James Franco plays the real-life canyoneer Aron Ralston, who was trapped by a boulder in an isolated slot canyon in Blue John Canyon in Utah.
Photographs: Movie still from 127 Hours Reuben NV/Rediff.com

Experienced trekker and cyclist, Reuben NV lists out six crucial things you must remember if you are heading out for a trek or picnic this monsoon.

The unfortunate Beas tragedy has brought to light the need to be cautious even while you may be picnicking.

Monsoon is a season for treks and picnics and water-related disasters are always lurking around the corner.

Rediff.com's Reuben NV is an experienced trekker and cyclist having travelled all over the country.

Here he lists out six crucial things you must remember if you are heading out this monsoon.

You can get robbed, killed, suffer a snake-bite, get attacked by an animal, fall ill or suffer a heart attack...

The list of things that can go wrong when you're trekking alone is longer than you can imagine.

Recently, an acquaintance went trekking at Harishchandragad, near Malshej Ghat in Ahmednagar district in Maharashtra over the weekend.

When he didn't return, a search party was sent and everyone's worst fears had come true.

His body was found fallen off from Konkan Kada, a popular cliff in the area that offers breathtaking panoramic views.

No one knew how he fell off the cliff or if he was alive after having fallen; it was heartbreaking.

It took almost two days to pull his body out from the deep precipice.

Even when you are travelling with a group, do not wander alone.

While we were trekking to Rajmachi, near Lonavala in Maharashtra, one of us strayed away and was accosted by two men who first hit him, threatened him and took away everything he had.

Always carry a whistle. It can be heard far away and takes less energy than shouting out for help.

Always inform someone responsible where you're heading out for a trek. So should something go wrong, they know where to start looking! 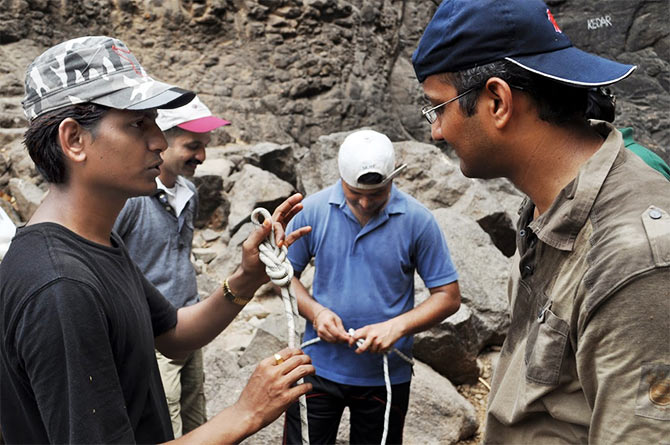 It doesn't matter whether you're heading to the beach or the mountains or the waterfalls... always, always carry a rope.

A rope has pulled us out of danger on several occasions, literally.

There was this one occasion when we trekking to Dudhsagar waterfalls in Goa when we crossed a small rivulet, just before we reached the base of the waterfall.

Of the 30 of us, two were from Goa itself and they joined us on their bikes.

We were enjoying ourselves when it started raining, so we decided to return.

But when we came to the rivulet, one of the bikes got stuck in water, because by now the level of water had increased.

Five of us tried to get the bike out and were struggling for some ten minutes when we realised that the force of the water was getting too strong for us.

We immediately pulled out a rope, secured it to a tree and pulled everyone (including the bike) to safety.

Also remember that carrying a rope is not sufficient. You need to learn the knots too.

Discretion is the better part of valour 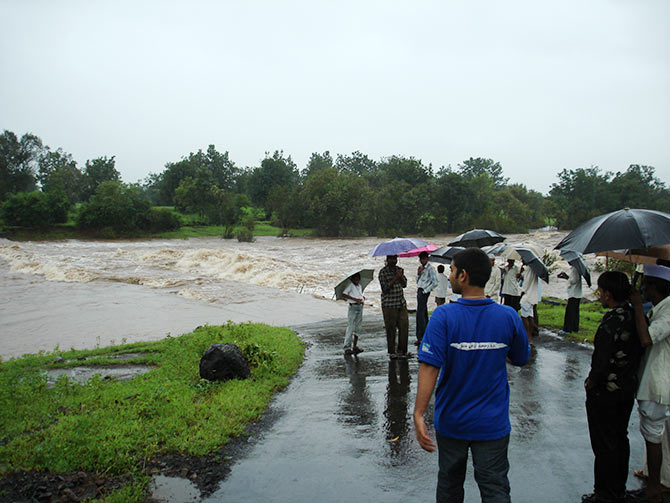 Image: There will be times when you think you can go on. Don't! If you're travelling by a rented vehicle, ensure your driver is alert at all times. (Picture used here for representational purposes only.)
Photographs: Reuben NV/Rediff.com Reuben NV/Rediff.com

Know when to back out.

Often, during a trek, or cycling expedition you will come to a point, where you ask yourself if you should stop or go further.

You will be tempted to go further.

Instead, back out and stay put.

There was this one time when we were trekking to the base village of Dhak Bairi caves near Karjat in Maharashtra.

It was raining heavily and the road was flooded

We could have easily waded through knee-high water and crossed over.

But after speaking to some villagers and consulting among ourselves we decided to back out.

A teacher in the village gave us shelter.

In retrospect it was a good thing because a few hours later, we learnt that several houses were being washed away in the village and were able to save many lives with… yep… the rope we were carrying.

Be extra careful at waterfalls and never climb one 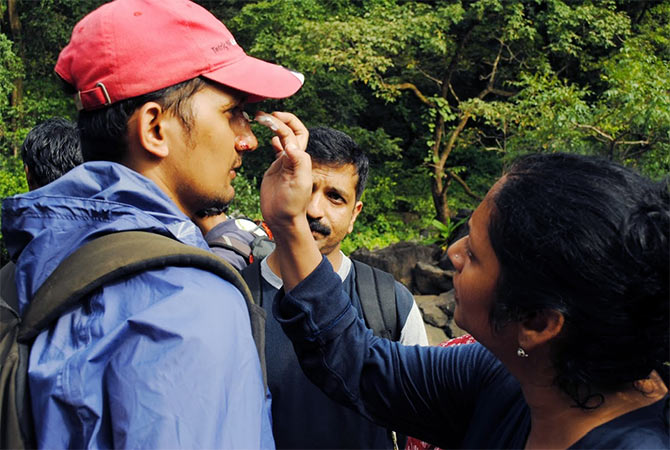 A high number of injuries and deaths caused by drowning are reported at waterfalls.

Never dive into a pool of water near a waterfall, even if you are an expert swimmer.

You don't know what lies beneath.

You also may not be able to gauge the undercurrent.

The man in the picture, like me, has been a trekking for many years.

On one particular trek, he found himself admiring the scene from the top of a waterfall the one second and landing right on his face the next. Apart from the fact that littering is a bad habit, it can also put you in danger.

Don't leave any leftovers because they attract rats and rats attract snakes.

You get the drift right?

It is also advisable to carry anti-venom in your first aid kit.

In the event of snakebite, even if you are to find a hospital, they may not necessarily have anti-venom in stock. 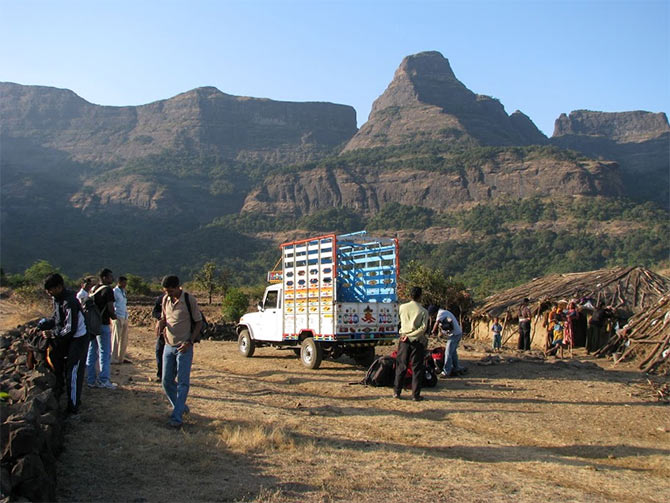 Image: If you're travelling by a rented vehicle, ensure your driver is alert at all times. (Picture used here for representational purposes only.)
Photographs: Kishore Rane Reuben NV/Rediff.com

If you are going for a trek or picnic by a hired vehicle, one of the first things you need to do is check if the driver is drunk.

We usually chat him up and discreetly check if he smells of alcohol.

If we are driving through the night, we ensure some of us are keeping an eye on the driver.

On one particular occasion, we discovered our bus driver was struggling to stay awake.

We immediately asked him to pull the bus over.

He splashed water on his face and got into the seat again.

Then we headed straight to a dhaba, ensured he had tea and only when we were convinced he wasn't sleepy anymore, we proceeded.

There's another important thing to bear in mind with drivers -- never ask them to drive fast just because you are running late.

And finally, here is a quick checklist of things you must carry if you're heading for a trek or a picnic: