Image: On Gudi Padwa, a gudi is hoisted outside the house
Photographs: Redtigerxyz/Wikimedia Commons

The beginning of the Hindu Lunar year is celebrated in different parts of India by different names and each has its own significance. We take a look at how India celebrates the Hindu New Year.

People from the state of Maharashtra celebrate their New Year as Gudi Padwa.

It is celebrated on the first day of the Chaitra month of the lunar Hindu calendar.

The word 'padwa' is derived from the Prakrit words 'paddava/paddova' which denotes the first day of the bright phase of the moon, also called pratipada in Sanskrit.

On this day, people hoist a 'gudi' -- which comprises a bright green or yellow cloth tied to the tip of a long bamboo over which sugar crystals, neem, mango leaves and a garland of red flowers are tied together.

A metal kalash, usually made of silver or copper is placed in the inverted position and the gudi is hoisted at a high position on the right side of the house -- either outside the window, balcony or the terrace so that everyone can see it from a distance.

While some believe that the 'gudi' is a sign of victory associated with the Maratha kings, this day is also commemorated as the victory of Lord Ram over Ravana and coincidences with the coronation ceremony after he retuned to Ayodhya.

It is considered auspicious to taste a mixture of neem leaves, jaggery and tamarind which signifies the bitter-sweet flavours of our life.

Popular preparations on this day include shrikhand (sweetened yoghurt) puri (fried flat bread) and puran poli, a preparation made from yellow gram and jaggery. Image: The ugadi pachadi is an important preparation which is consumed on New Year
Photographs: Srinivas14/Wikimedia Commons

People in Southern India, particularly those from Karnataka, Andhra Pradesh and Konkan Maharashtra celebrate their new year on Ugadi.

Yugadi or Ugadi as it popularly known comes from the Sanskrit words yuga meaning age and adi which means beginning.

Although it falls on a different day each year, it is usually celebrated between March and April.

On this day, people have a ritual shower and attend the nearby temple to observe prayers.

Women decorate the house with colourful rangolis and floral arrangements.

Just like the gudi, which is a mixture of sweet and bitterness, on Ugadi, it is considered auspicious to taste six different variations in food.

The ugadi pachhadi is consumed on this day. 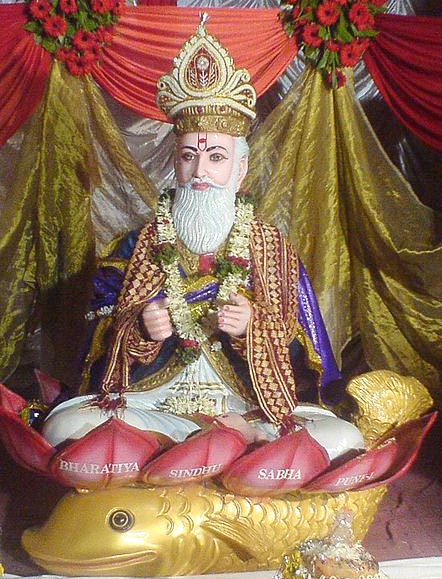 Image: An idol of the Jhulelal is worshipped on this day
Photographs: Coolross/Wikimedia Commons

Sindhis from both Pakistan and India celebrate their New Year as Cheti Chand.

In fact, the second day of the Chaitra month of the Hindu lunar calendar is known as Chet, hence the name Cheti Chand.

The festival also celebrates the birth of Ishtadeva Uderolal, popularly known as Jhulelal, an important saint of the Sindhis.

On this day, people worship water and perform poojas at the nearby lake or river.

The pooja thali or plate called the Baharana Sahib consists of an oil lamp, sugar, cardamom, and fruits.

It also has a kalash, a metal pot and coconut covered in bright cloth and decorated with flowers and leaves which is offered to Jhulelal. 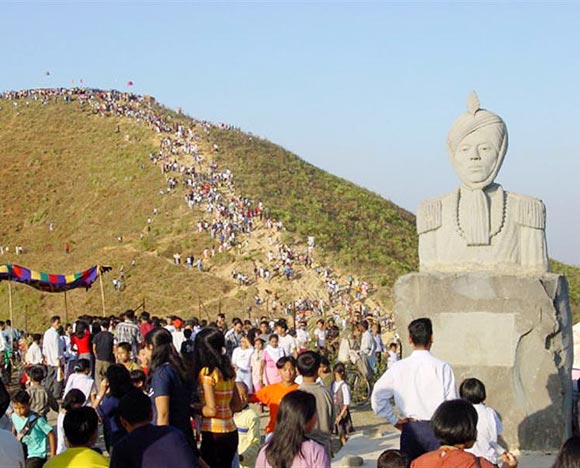 Image: On this day, people climb the Cheiraoching hills to offer their prayers at the temple
Photographs: Mongyamba/Wikimedia Commons

People from Manipur celebrate their New Year as Sajibu Cheiroba.

It is celebrated on the first day of the Sajibu month (April) of the Meitei calendar every year.

Cheiraoba indicates the end of the year and the beginning of a new year according to Meitei calendar.

Ahead of the festival, people get together to clean the house, wash the utensils and decorate it with flowers.

The festival also signifies the strengthening of the bond of love and brotherhood among families and between neighbours.

On this day, the women of the house prepare Athelpot a preparation from whole rice, raw vegetables, fruits and flowers.

This is then offered to Lainingthou Sanamahi and Leimarel Ima Sidabi by placing them at the southwestern and middle north corner of the house respectively.

The food is then shared with the family and neighbours.

In the evening, while most people offer prayers to their local deities, married women visit their parents and offer them new clothes and gifts and seek their blessings. People from Northern India, particularly those from the Sikh community celebrate their New Year as Baisakhi.

It is usually celebrated on April 13 or 14 every year.

Vaishaki, Baisakh (for people in Assam) or Baisakhi as it is popularly known celebrates the contribution of Guru Gobind Singh, the tenth Sikh Guru who also laid the foundation of the Panth Khalsa.

This day signifies merriment for farmers who have toiled through the year for a good harvest.

On this day, farmers offer prayers and perform the bhangra to thank God for the harvest and pray for prosperity through the year. 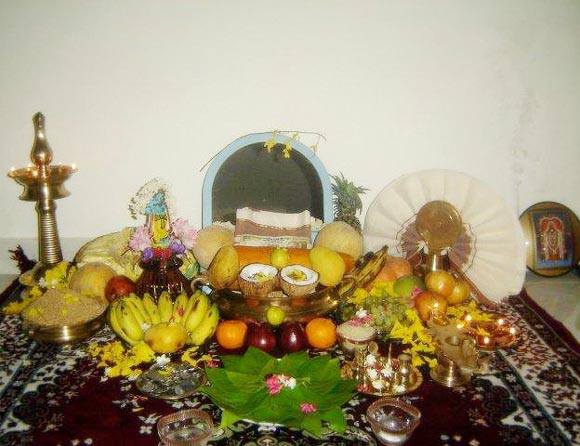 Image: The Vishukani is a sign of prosperity and goodness
Photographs: Sureshcnair/Wikimedia Commons

People from Kerala, Mangalore and Udipi districts celebrate their New Year on Vishu.

It is usually celebrated in the second week of April.

One of the most significant event in Vishu is the Vishukani -- an auspicious arrangement of fruits, vegetables, flowers, silver and gold coins presented before Lord Krishna in a sacred corner of the house.

A bronze lamp decorated with flowers and a mirror is also placed in the centre.

The Vishukani is arranged the night before the festival usually by the eldest lady of the house and is the first thing to be seen when you wake up in the New Year. It is believed to bring in prosperity and happiness through the year.

After the Vishukani, elder members of the house distribute 'kaineetam' -- usually silver or gold coins to younger members of the family who receive the same and seek their blessings in return.

Children wear new clothes and burst crackers to usher in the New Year.

In some parts of Kerala, kaineetam comprises new clothes or food, which is given to the servants and poor people in the neighbourhood.

Among the preparations made on this day include veppampoorasam a bitter preparation of neem flowers and mampazhappulissery, a sweet-sour mango soup.