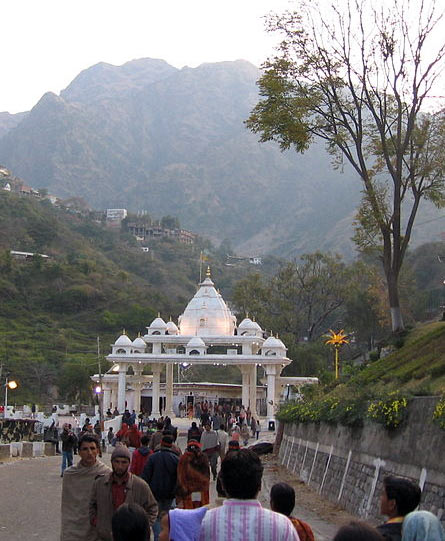 As part of Navratri celebrations we bring you some of the most unique temples dedicated to Goddess Durga.

Here are 16 such interesting Durga Temples in India.

Situated at an altitude of over 5,000 feet, 60 km north of Jammu, it is a very sacred spot. The shrine is located inside a cave. It has three deities there -- Goddess Kali, Goddess Saraswati and Goddess Lakshmi.

Legend has it that Vishno Devi, a devotee of Lord Vishnu, ran into the cave when she was chased by the tantric Bhairon Nath. There she assumed the form of Goddess Kali and cut off his head which fell at the spot where the Bhairon Mandir is now located.

Despite the difficult terrain, more so during winters when there is snowfall, millions of devotees visit this temple, situated on the Trikuta hills each year.

The Yatra starts at Katra. After a 13 km walk the shrine is reached. 1 km from there is the Banganga where Devi had quenched her thirst. 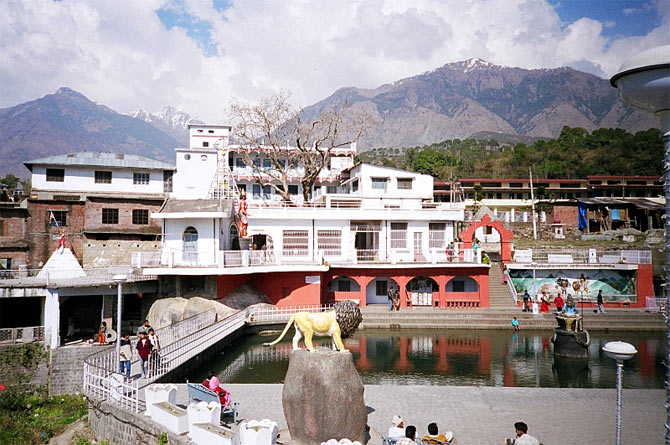 Located on the banks of the River Baner, a few kilometres from Palampur, the deity here is in the wrathful form. The unique colourful temple houses the Goddess who is completely covered in a red cloth. On either side of the Goddess are the idols of Hanumanji and Bhairo. 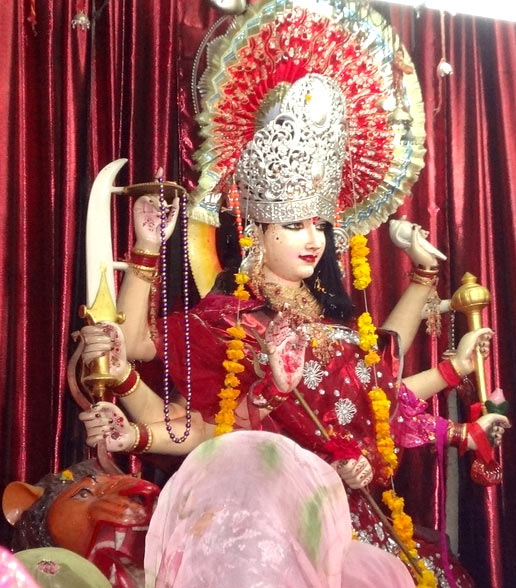 Located 30 km from the Kangra valley, this temple is dedicated to Goddess Jwalamukhi. There are natural flames in the temple which are worshipped here. There are nine such flames and these are considered the nine incarnations of Goddess Durga. They erupt from one of the rocks and keep burning without any fuel.

Legend has it that when the demons were creating havoc in the Himalayan Mountains, Lord Vishnu created huge flames. These flames gave birth to a girl called Adishakti who destroyed the demons. 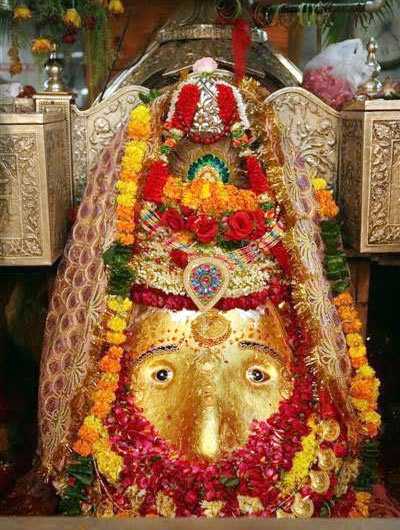 Located near Nehru Place in South Delhi, it is a very popular temple dedicated to the Goddess. It is a pretty old temple with the some portions dating back to 1764 A.D.

The Kali Temple however had been built more than 300 years back. Legend says that even the Pandavs worshipped here. The uniqueness of the temple lies in the special evening tantric aarti. 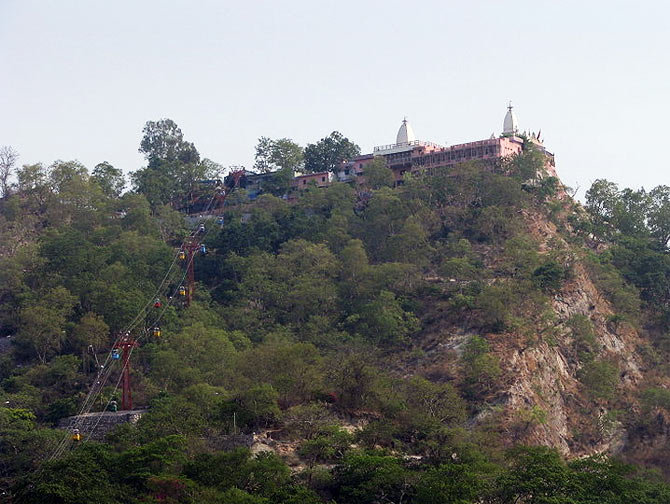 This temple is located in Haridwar on the Bilwa Parvat -- a part of the Sivalik Hills. It is this also called the Bilwa Tirth.

Goddess Mansa is said to have emerged from the mind of the sage Kashyap. Mansa, who is the sister of the serpent Vasuki is said to be the fulfiller of wishes.

Due to this pilgrims who visit this temple, tie a thread around a tree within the temple premises and come back to untie it once it is fulfilled. 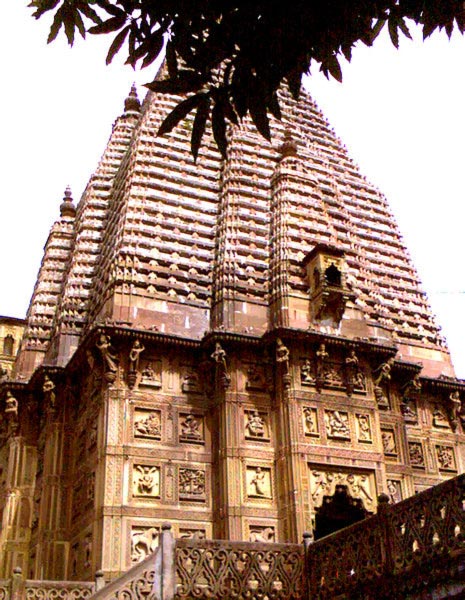 Situated very close to Varanasi, this 18th century shrine was built by a Bengali queen. The multi tiered shikhara is reminiscent of the Nagara style of architecture. The temple is located on a huge rectangular tank.

The Goddess here is said to fiercely protect the locals from any outside influence. Some say that the idol here was never installed by anyone. Rather it manifested on its own. While non-Hindus can enter the temple, they are not allowed in the inner sanctum. This temple is also called the Monkey Temple due to the manifold presence of this animal here. 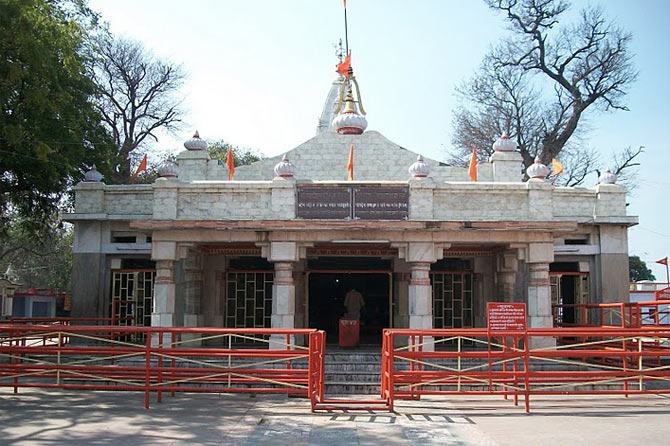 Located 70 km. from Gonda, this is the spot where, as the story goes, the right shoulder of Sati had fallen. The temple was constructed by King Vikramaditya anad later renovated by King Suheldeo. During Navratri a huge fair is held near the temple.

Interestingly, during this time the deity of Pir Ratan Nath is got from Nepal as well and the two are then worshipped together. 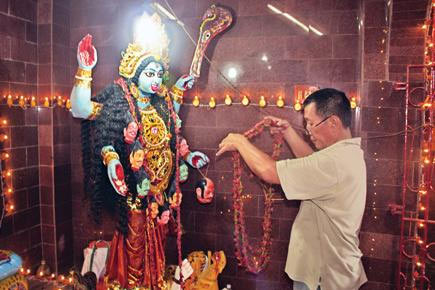 In Tangra, Kolkata there is a sixty-year-old Chinese Kali temple. It is visited by all the local Chinese people of the area during Kali Puja.

Most of them are either Buddhists or Christians.

Interestingly enough, the pandit here is a Bengali Brahmin. The idol here started off as only a few black stones under a tree on which the devotees used to smear sindoor. As prasad, the devotees are given noodles and vegetable and rice dishes here! 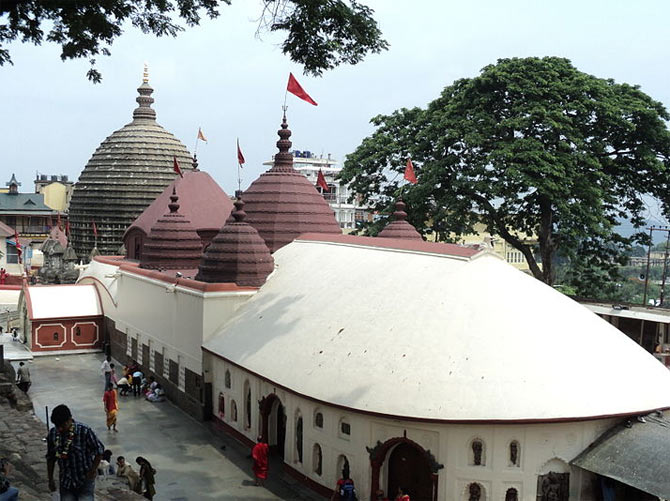 This is a cave temple.To reach the temple one has to climb down a few steps to reach a dark hole.

Here is the Goddess draped in sari and decorated with flowers. At this temple, goats are still sacrificed. This is a tradition that is continuing from the Khasi times.

Other than Durga Puja another festival is celebrated here. This is the Ambubachi or the fertility festival. It is believed that the Goddess undergoes her menstrual period during this time.

Located 8 km away from the city, it is perched on the Nilachal Hill.

This temple honours the female energy power of the Goddess. Story has it that this shrine formed when Lord Shiva was carrying the corpse of Goddess Sati on his body and her female genital fell on this spot. 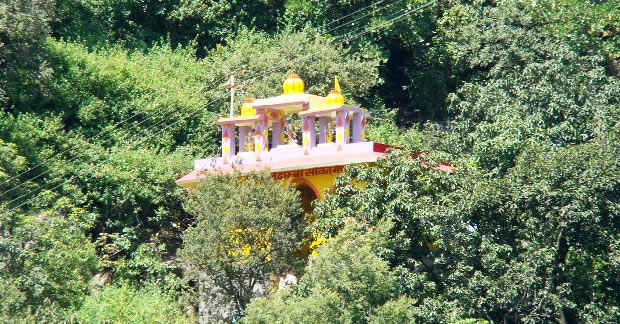 Located in Mt. Abu, the temple is within a cave. It is also known as the Arbuda Devi Temple. Legend has it that the image of the Goddess was found hanging in mid air when the shrine was originally built. Devotees climb around 365 steps and then crawl inside a cave to reach the shrine. 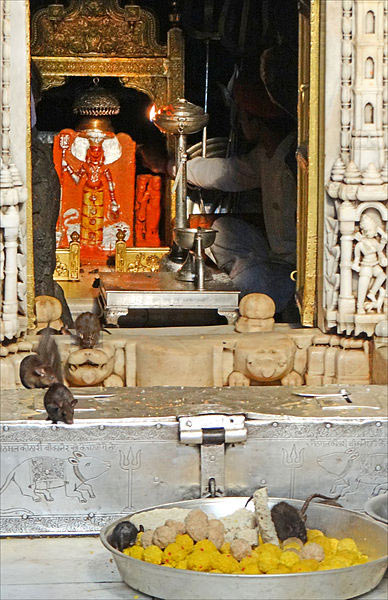 This 600-year-old temple dating back to the 15th century was constructed under Maharaja Ganga Singh’s rule. It is located 60 km from Bikaner and is dedicated to Karni Mata. She is believed to be incarnation of Goddess Durga.

One attraction here is the rats. According to legends, when the youngest son dies, Goddess Karni asked Yama to bring him back to life which was denied. She then assumed the form of Goddess Durga and brought her son back to life and proclaimed that no one from her family would ever die again.

Rather their souls would live on in the rats.

Today the temple has over 20,000 rats and they are fed milk and sweets in large metal bowls. Seeing four white rats together is believed to be very auspicious. The majestic silver gates and the marble carvings are an attraction of this temple too.

The best time to visit is during Navratri when thousands of pilgrims throng to this temple. 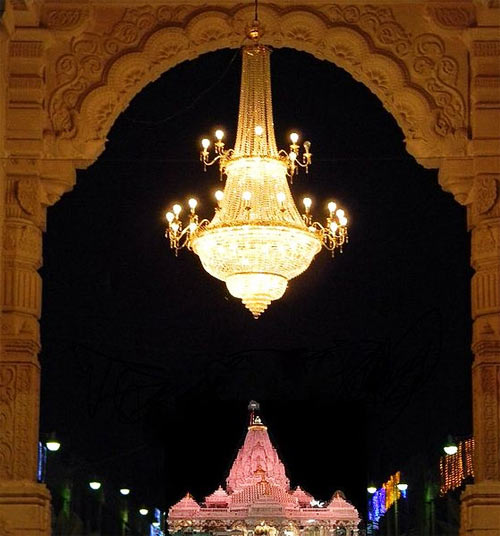 Situated on the Abu road, this shrine has no deity of the Goddess.

A triangle shaped Vishwa Yantra, with figures and the word Shree in the middle represents the deity.

However even this cannot be seen with the naked eye. This temple sees the maximum visitors during full moon nights.

It is believed that Sati’s heart had fallen here and hence is recognised as the original Shakti Peeth. 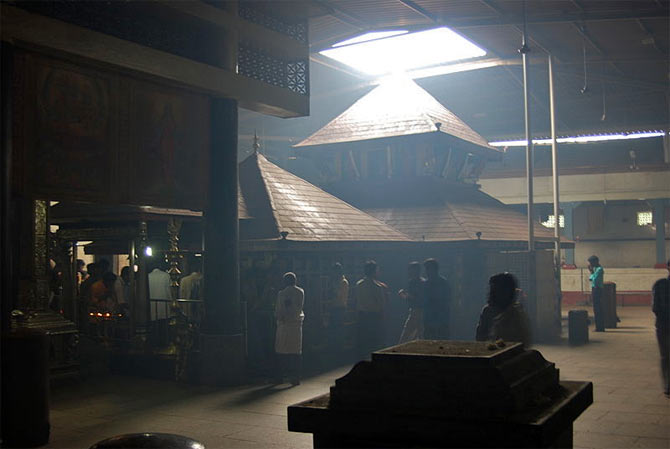 This temple located in Kateel, around 30 kilometres from Mangalore is a unique one. It is situated in the middle of the river. In fact the river flows through all the lower layer of the temple. It is dedicated to Durga Parameshwari.

Before one enters the temple, there is a huge rock on the left hand side. Pujas are performed on this rock, known as Goddess Rakteshwari, every day. The shrine also has a deity of Goddess Chamundi.

It is believed that Goddess Durga Parameshwari likes dance and music. Due to this there is an entire team who performs music and dance shows in the temple.

Dedicated to Shakti, this temple is unique in quite a few ways. Firstly it is opened only for a week in the entire year during Diwali. For the rest of the year, bags of rice, flowers and a lit lamp are left for the Goddess.

As for the deity, there is an anthill inside the premises which is considered to be the Goddess.

As for the architecture, since it was built during the Hoysala dynasty, it reflects their faith in Jainism.

For those visiting the temple, don’t miss the image of the demon Ravana with nine heads. Why he has been depicted so, however, remains unknown. 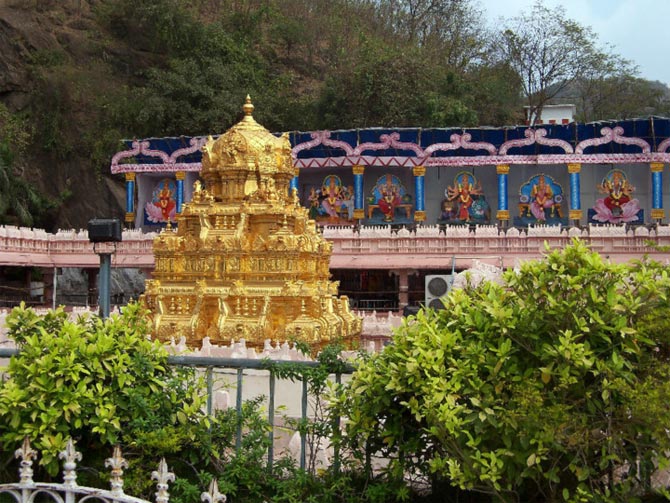 Goddess Kanaka Durga, the goddess of power and benevolence is the deity of this temple. The idol in this temple located on the Indrakiladri hill and on the banks of the river Krishna in Vijaywada is said to be very powerful.

Indrakeeladri is unique because it is the chosen abode of the Goddess and Her consort Malleswara as the self-existent one. However, here the Goddess is seen on the right of Her consort which is against the tradition. 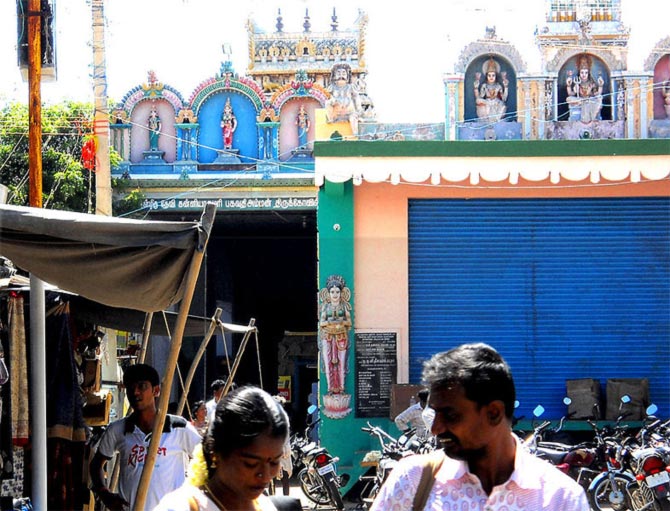 Situated in Kanyakumari, the location of this temple is truly a picturesque one. It is located at the confluence of the three seas. It is said that it is over two thousand years old. Story has it that Lord Shiva created the power Bhagavati when the demon Banasura was harassing the Gods. After a long battle the demon was ultimately destroyed.

During Navratri this incident is depicted. A little away from the coastline stands a rocky island. Locals say that the temple was originally located there. But later it was removed from there. The presence of a human footmark on the island is revered as the Sripadam.

Other than these, some of the other important temples dedicated to Goddess Durga are: