Sign in  |  Create a Rediffmail account
Rediff.com  » Getahead » PICS: What it takes to be a Lakme Model!

PICS: What it takes to be a Lakme Model! 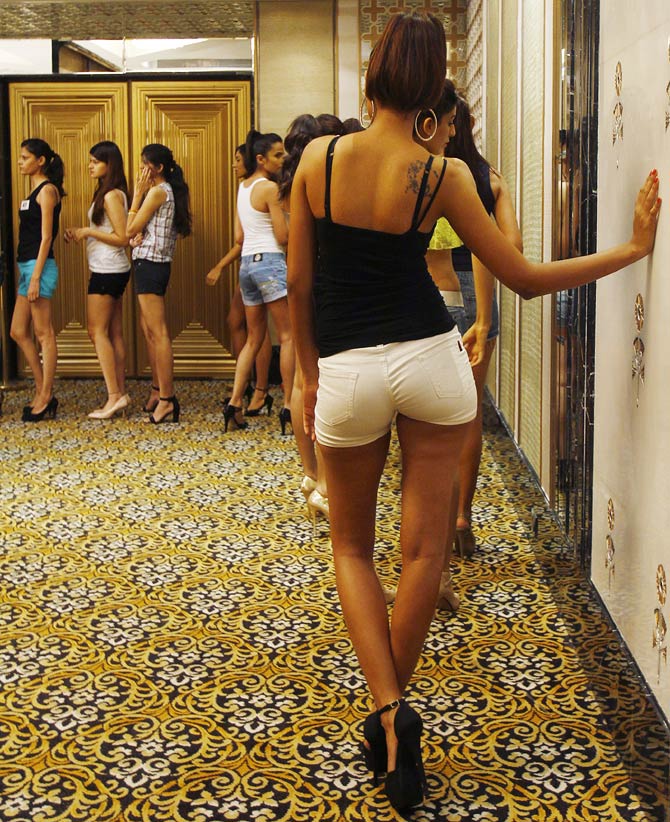 Image: Young models aged between 18 and 25 prepare themselves for the auditions in Mumbai.
Photographs: Hitesh Harisinghani/Rediff.com Divya Nair/Rediff.com

Every year, Lakme auditions hundreds of aspiring models from across the country and presents them the opportunity to participate in their biggest fashion event -- Lakme Fashion Week Winter Festive 2014 to be held in August.

We give you a sneak peak into the recently concluded model auditions that took place in Mumbai.

If you think being skinny and having a pretty face is all you need to become a top model, you probably need some counselling.

At the recently held auditions, out of the 120 aspiring models who registered -- most of who were well above 5 ft 7 inches, had clear skin and a lean figure -- only a handful were chosen to walk for what is known as the country’s biggest and most-talked-about fashion event.

So, what is it that distinguishes a good model from an average one?

What is so alluring about the profession that draws all these young women to come back even after facing failure at previous auditions? We find out!

"Modelling is a highly challenging profession. Behind all the glitz and glamour, there is a lot of hard work and perseverance involved. Young models who do not make in the first or two attempts lose heart and go back to doing something else."

"That's where passionate models differ from the average ones," says 22-year-old Goa-born fashion stylist Neev Marcel who's worked with brands like Diesel, Femina, Jashn and walked for designers like Anita Dongre and Manish Malhotra in the last three years of her career.

Although she admits that it's a short-lived career, Marcel believes that for those who are passionate and willing to sweat it out, the sky is the limit.

Good looks are just not enough 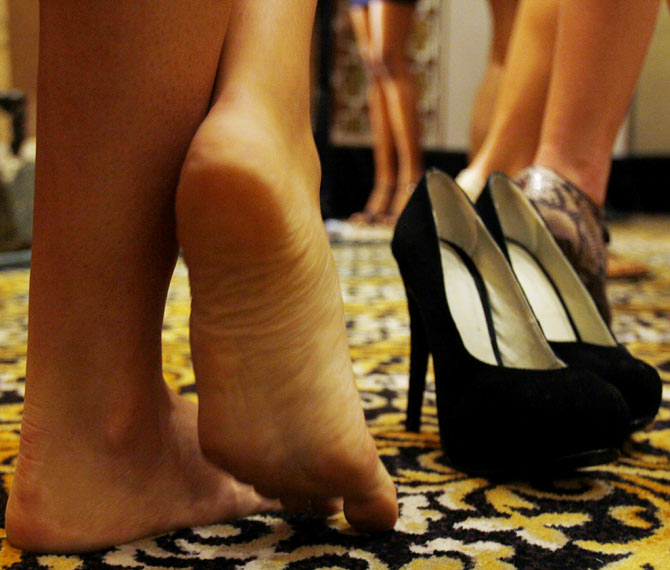 Image: An aspiring model rests her naked feet before her turn arrives at the Lakme auditions in Mumbai.
Photographs: Hitesh Harisinghani/Rediff.com

Allahabad-based Vartila Kaul, 23 who previously featured in the fourth season of MTV's reality show Splitsvilla is a graduate in Business Administration from Delhi University.

From her five-year experience in the entertainment and glamour industry, she's realised that it takes a lot more than just good looks and passion to survive in the industry.

"Money plays a huge role. To be a good model requires you to invest a certain amount of money every month on grooming -- your gym fees, your salon visits, the clothes you wear, the accessories, the make-up. I spend a minimum of Rs 15,000 to 20,000 every month to keep myself fit and healthy. Not everyone is able to afford that kind of money. So, some of them opt out and look for alternate employment," says Kaul who also played a small role in the Hindi film Dehraadun Diary.

Age can be a deterrent too, says Neev Marcel.

"In the process of gaining more and more experience, you'll take up lesser-known projects and probably age out. By the time you even realise this, new models will take your place," she warns.

"The key is to start early and do as many projects when you are at the peak of your career," Marcel advises.

'Not everyone gets to live their dream' 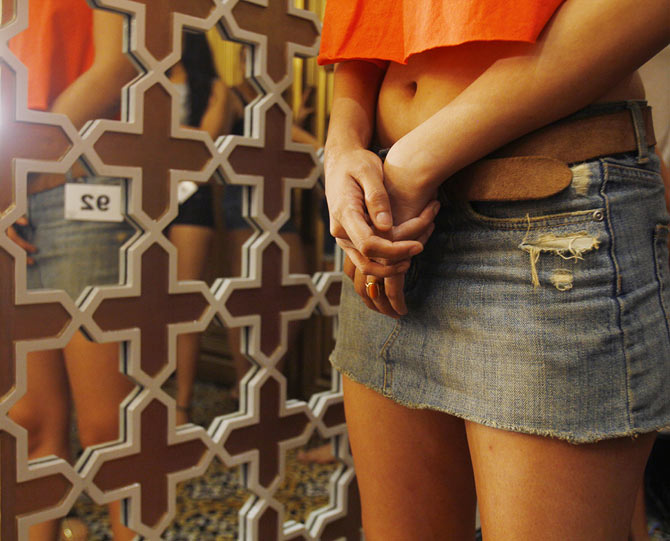 Image: A model awaits her turn at the auditions.
Photographs: Hitesh Harisinghani/Rediff.com

Mumbai's Lavina Israni, 20, was auditioning for the second time at Lakme this year.

The leggy lass has, in the past, worked for brands like Bharti AXA insurance, Femina and Viacom 18.

Israni was also the face of Ponds BB cream this year, but that doesn't make her struggle any easier.

"It feels really good when people see you in print or television ads and congratulate you for your success. But there's a lot of networking, hard work and patience that goes into the process of you becoming even a semi-successful model.

"I know a lot of friends who start off by saying they want to pursue modelling and end up doing small roles for television serials. Because at the end of the day, you need to sustain, you need to make money as well.

"Not everyone gets to live their dream. Luck is also a major driving factor."

'In India, you see a lot of scope for fair and clear-skinned women' 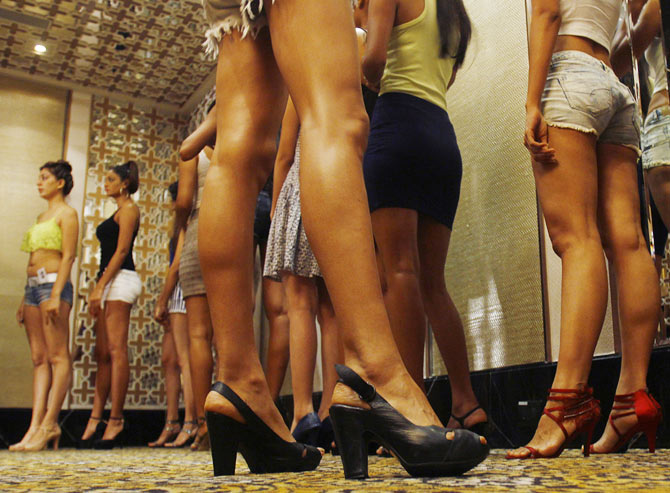 Image: To be able to audition for Lakme, you need a minimum height of 5 ft 7 inches.
Photographs: Hitesh Harisinghani/Rediff.com

India vs Rest of the world

Veronika from Slovakia who was travelling to India for the first time to audition for Lakme feels that there's a lot of promise for models in India, but at the same time there's also prejudice in the selection process.

"I was at the Milan Fashion Week and I'm sorry to say this, but the models there look very skinny and I don't think anyone would even take a second look at them if you pass by them on the streets. Ugly would be the wrong word to describe some of the models, but the criteria of selection varies from country to country. In India, you see a lot of scope for fair and clear-skinned women; they are not looking for skinny models, for sure. So, you need to research well what the panel is looking for and audition only for roles where you see a market."

'Indian girls have nice hair and eyes, compared to the rest of the world' 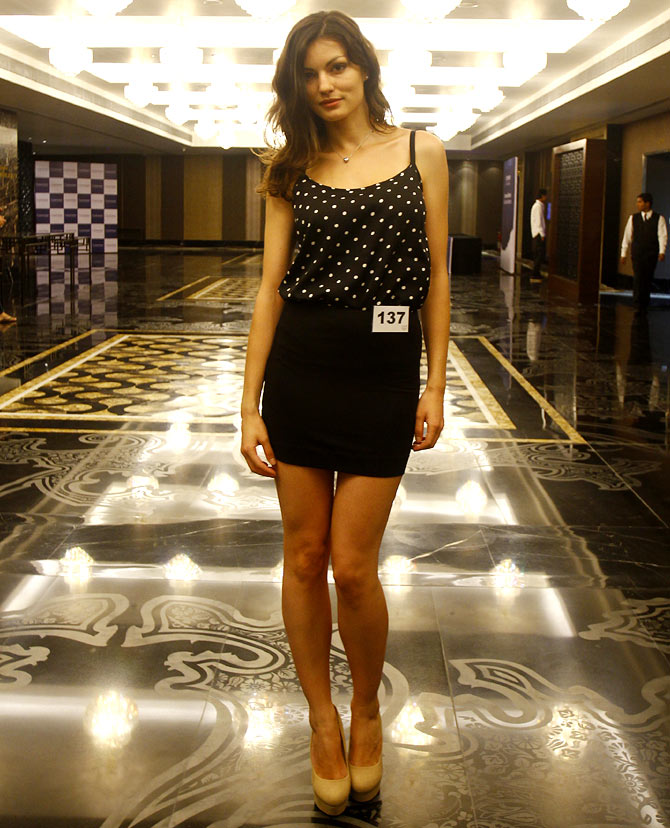 Image: Veronika from Slovakia says the fashion scene in her country is not very encouraging.
Photographs: Hitesh Harisinghani/Rediff.com

Adriana Adler, 23, a fashion design graduate, who's been working as a stylist in Germany has been making frequent trips to India to check the latest trends in the country.

"I have travelled to Paris, London and New York in the last three years and even worked with a lot of young models, helping them style their look and clothes. I've realised that girls in India are quite shy when it comes to exposing their features.

"They are very conscious about the way they present themselves. Indian girls have nice hair and eyes, compared to the rest of the world, but they don’t take care so much about their posture and the way they walk.

"That's where they fail and need improvement."

'You have to make your presence felt' 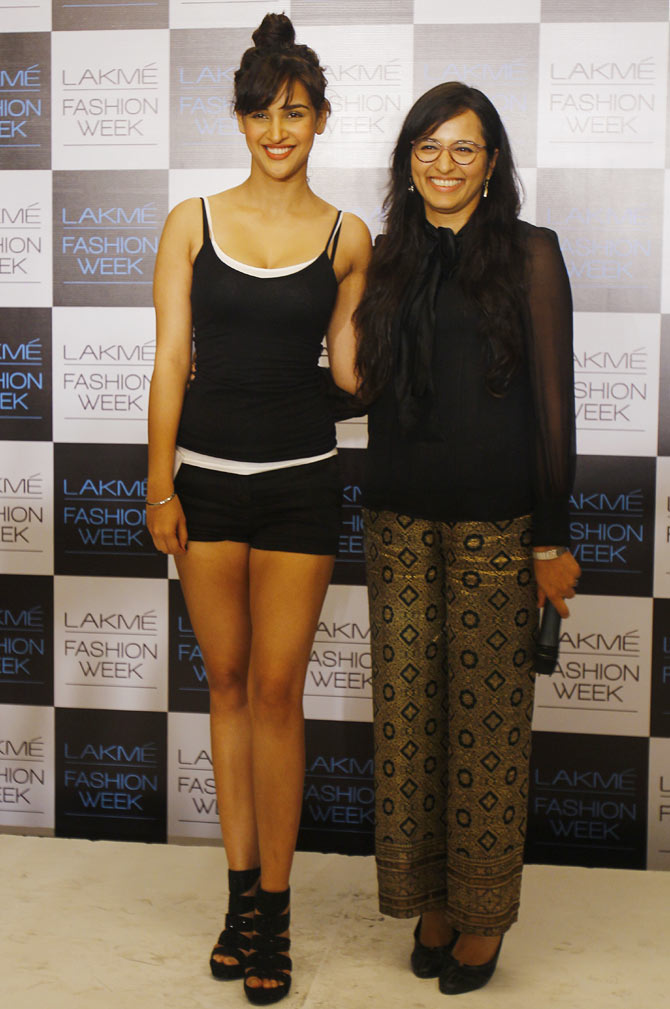 Image: Aisha Sharma, who was chosen as the Face of Lakme poses with Purnima Lamba, head of innovation at Lakme
Photographs: Hitesh Harisinghani/Rediff.com

Do Indian aspirants really know what it takes to be a supermodel? Where are they going wrong?

"How confident you are on the ramp is all that matters. Most of them who aspire to be a model think people are interested in their face and their features. But that’s not the case; they are interested to know whether or not you’re fit to present their brand. Do you have the features and the confidence that will complement the brand they endorse? That's what they're looking at," says Neev Marcel.

If you want to be a model, you must sign up with a good model placement agency, insists Vartika Kaul.

"If you are new to the industry, agencies will update you with the latest shows from where you can build your contacts and eventually make it big."

"You cannot afford to be sitting in your home and expecting designers and photographers to call you all the time. You have to make your presence felt -- network with people, update your contact list and attend as many shows as you can."

'At Lakme, we are not looking for just another pretty face' 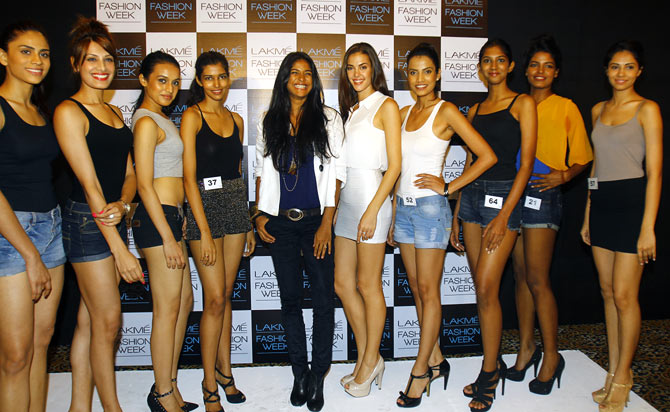 Image: The nine finalists pose with Carol Gracias (in the centre) at the end of the auditions in Mumbai.
Photographs: Hitesh Harisinghani/Rediff.com

Modelling as a career: Experts' take

He was one of the panelists for the auditions along with designer Rocky S, model Carol Gracias, photographer Colston Julian, Vogue India's fashion director Anaita Shroff Adajania, fashion choreographer Rashmi Virmani and head of innovation at Lakme Purnima Lamba.

Here, Dhankar tells us why the panel chose only nine models out of the 120 and why the others failed.

"A lot of them who auditioned for the role were newcomers and one could make it out from the way they landed their first step. They were nervous, lacked the confidence and the posture that is required of a model. At Lakme, we are not looking for just another pretty face. Some of them had the confidence but their bodies weren't proportionate. Others who had good features lacked the confidence we were looking for. It has to be a combination of a lot of deciding factors -- the right attitude and the right gait. The right poise comes out of hours of practice and experience. Walking in front of the mirror helps you improve but walking in front of an audience is different. You need to be able to handle the attention."

Purnima Lamba, head of Innovation at Lakme says the current generation is gifted with the power of the Internet but very few of them make good use of it.

"Why just Lakme, most high profile fashion shows are recorded and uploaded online. Even if you were to watch ten shows, you’d have a fair idea what works, what doesn't. All you have to do is practice and improve on it."

The nine finalists who made the cut include -- Pooja Mor, Alicia Komodromos, Shreya Chaudhary, Nikita Yadav, Jyotpriya Sud, Nischita Rao, Gurleen Grewal, Nikita Sahay and Hida Siddiqui -- all of who will feature in the upcoming Lakme Fashion Week Winter Festive to be held between August 20 to 24, 2014 at the Palladium Hotel in Mumbai.

Meanwhile, Aisha Sharma has been chosen as be the 'Face of Lakme'.

While actor Kareena Kapoor continues to be the brand's ambassador, Sharma will get to promote a host of leading fashion brands and accessories including Lakme that will be featured at the country's greatest fashion event.