e assume as children that books are eternal, that the books that truly changed our lives will always be available on some shelf or the other.

I lost my innocence early, when after years of not being able to locate a copy of The Little Velveteen Rabbit, I finally found a page -- transmuted into a paper bag. 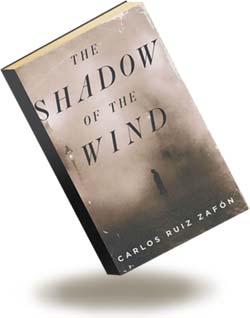 It was like discovering that a friend had stuffed some beloved but departed grandparent's head and was using it as a lamp stand.

No true bibliophile, haunted by the secret fear that his favourite books will end up remaindered, pulped, forgotten, will be able to resist the central conceit of Carlos Ruiz Zafon's The Shadow Of The Wind.

We are introduced to this by Daniel, son of a dealer in rare books, who is taken at the age of 10 to the Cemetery of Forgotten Books. Hidden inside 'the carcass of a palace' in Barcelona, this is 'a place of mystery, a sanctuary'.

As Daniel's father explains, 'In this place, books no longer remembered by anyone, books that are lost in time, live forever, waiting for the day when they will reach a new reader's hands. According to tradition, the first time someone visits this place, he must choose a book, whichever he wants, and adopt it, making sure that it will never disappear, that it will always stay alive.'

The book Daniel chooses, appropriately enough for a metafiction novel, is called The Shadow Of The Wind.

Now Zafon's Shadow, first published in Spanish in 2001 and translated only recently into English, has been hugely, improbably successful, a sort of thinking person's Da Vinci Code.

The book Daniel chooses to guard was written by one Julian Carax, an author who died under mysterious circumstances after a life of writing brilliant novels doomed to popular failure. And Daniel's task is made doubly difficult by a sinister stranger who has spent his life putting as many of Carax's books as he can find to the torch.

You couldn't ask for a more promising start, but it's downhill from here.

The Shadow Of The Wind pulls all the stops out, piling intrigue upon intrigue, mixing young love with a portrait of war-damaged Barcelona. Julian Carax has a past fraught with high romance and great peril; his future as a writer is uncertain.

Everyone whom Daniel meets has a story within a story to tell; he must unravel the myriad threads until he has woven a web of facts from the mess.

And what disappointing facts they are: despite the hints at something astonishing, the allusions of so many characters to a dark story that blends myth and history, the final version of Julian Carax's life is almost mundane.

But then Zafon promised us the earth, a foolish thing to do with your first novel. 'Few things leave a deeper mark on a reader than the first book that finds its way into his heart. Those first images, the echo of words we think we have left behind, accompany us throughout our lives and sculpt a palace in our memory to which, sooner or later -- no matter how many books we read, how many worlds we discover, or how much we learn or forget -- we will return.'

Zafon has a playful mind and takes a deep delight in tongue-in-cheek literary jokes: 'The discussion turned to some documents found in the basement of El Escorial that hinted at the possibility that Don Miguel de Cervantes had in fact been the nom de plume of a large, hairy lady of letters from Toledo.'

But it would take a genius to make The Shadow Of The Wind what Zafon, and we, would like it to be: a book that teaches us that by reading, we can live more intensely.

There is nothing wrong with Zafon's Barcelona, 'a city of shadows' still haunted by the memory of the civil war that nearly tore Spain apart, the repository of bitter memories but also of hope.

But his villain is a caricature, a cartoonish, sneering figure who is diminished on closer acquaintance, the winding stories of the rest unnecessarily longwinded and insubstantial.

Nothing matches the brilliance of that first chapter, that first conceit, and you read the rest of the book sluggishly, with a sense of growing discontentment. Zafon cannot rise to the challenge of telling Carax's story, or Daniel's, or even Barcelona's: but it is a different matter when he lets himself go on the novel's real obsession.

Its secret hero is the reader and the most poignant, memorable moments in The Shadow Of The Wind come when Zafon writes of the act of reading.

'I couldn't help thinking that if I, by pure chance, had found a whole universe in a single unknown book, buried in that endless necropolis, tens of thousands more would remain unexplored, forgotten forever.

'I felt myself surrounded by millions of abandoned pages, by worlds and souls without an owner sinking in an ocean of darkness, while the world that throbbed outside the library seemed to be losing its memory, day after day, unknowingly, feeling all the wiser the more it forgot.'

This is the secret lament of the reader, the incantation muttered to the bibliophile undergoing initiation. The Shadow Of The Wind may contain a minor twinkling star or two instead of a whole universe, but these passages alone are worth the price of entry and the inevitable payment in the coin of disappointment.