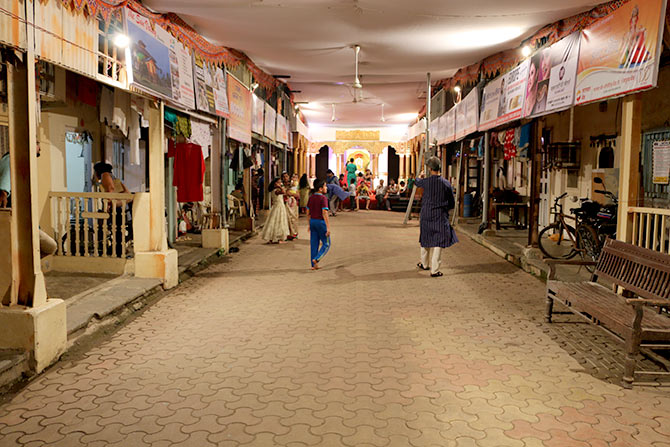 IMAGE: On September 15, 1901, Lokmanya Tilak visited the Keshavji Naik Chawl, a fact now hidden in the dusty annals of history.

Lined with tiny kholis (rooms) on either side, the single-storied Keshavji Naik Chawl is situated in south Mumbai's Girgaon area.

During Ganesh Utsav, these sleepy streets burst into life and are dotted with pandals, each competing with the other with their extravagant idols and themes; Girgaon is home to Mumbai's most famous Ganesh pandals.

Yet, the minute you step into the lane leading to this chawl, the loud volume that necessarily seems to accompany Ganeshotsav celebrations these days suddenly seems to fade.

It feels like you have stepped back at least a century. There are no loudspeakers. No high-budget decor. No DJ music. No lavish pandal.

At the extreme end of the courtyard stands a humble platform on which sits a two-and-a-half feet Ganesh idol.

Fresh flowers and fruits are kept on either side of the moorti; the background is small, yet ornate. 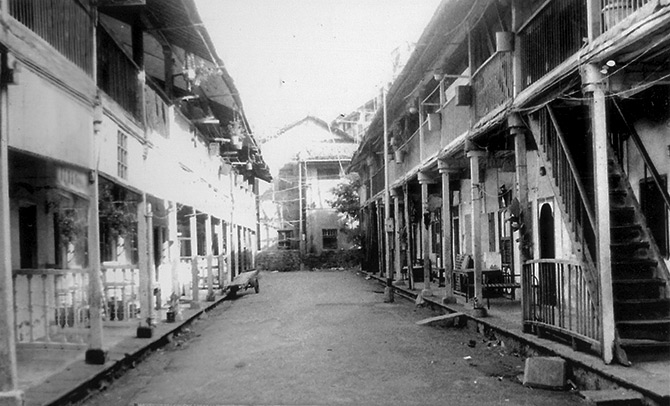 One can still spot the century-old wooden palki (palanquin), used to bring the idol, in one of the verandahs on the ground floor (See if you can spot the palkiin the photographs above).

Post the visarjan, the palki is moved to a tiny loft in one of the many tiny rooms that make up this chawl where neighbours automatically become family.

In 1893, inspired by Lokmanya Tilak, the Keshavji Naik Chawl started celebrating Ganeshotsav in a simple manner.

This year, the mandal enters its 125th year. Yet, two things remain the same -- the size of the idol and the scale of the celebration. 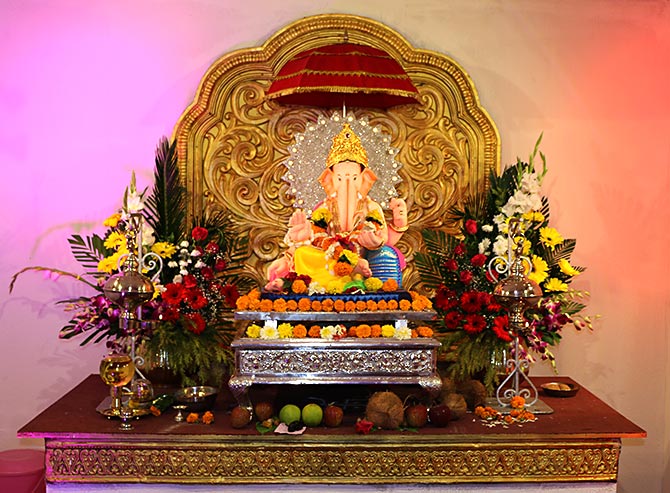 IMAGE: The celebrations at the Keshavji Naik Chawl could be the answer to Mumbai's dire need for eco-friendly Ganeshas.

In front of the idol, on a small stage specially erected for the festive season, you will spot children playing games in the evening. Back in the kholis, their mothers quickly finish preparing dinner before the evening aarti begins.

Meanwhile, the menfolk, who have just returned from work, sit near the stage and discuss their day.

You feel a sense of community in this chawl, which has been home to well-known figures like Marathi poet Krishnaji Keshav Damle (popularly known as Keshavsut) and freedom fighter S M Joshi.

The residents take pride in their chawl.

"Everyone from the chawl come together to help out during the festival," he says.

"(It's here that) you learn how to deal with people, be patient and let go of your ego. It is a thankless job. We do (the pandal work) out of sheer devotion." 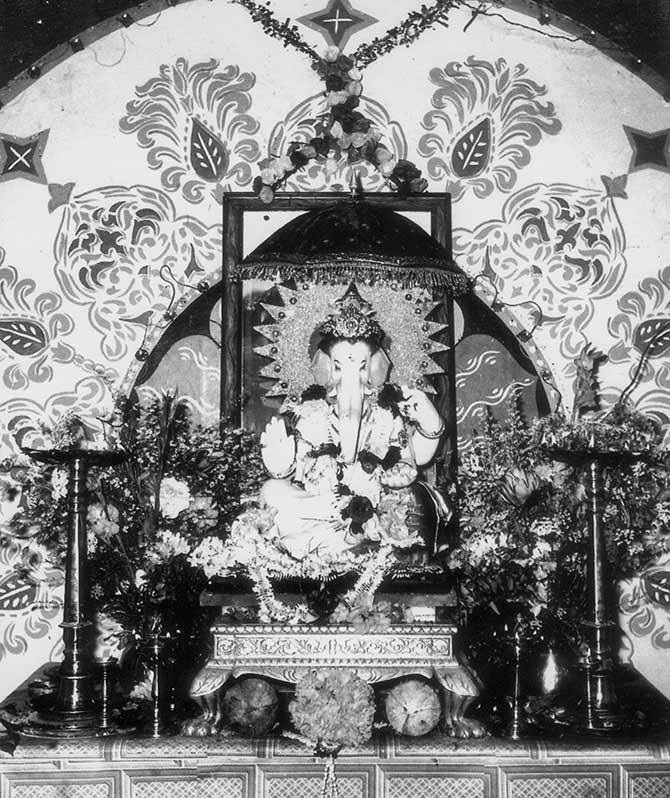 According to Saptute, "It is at this pandal that the residents get to meet several celebrities and well-known figures. We are ordinary people and not used to all this attention."

"We have been very fortunate that Tilak visited our pandal. It is because of him that people visit the pandal. Everyone wants to see the place that Tilak had visited."

Saptute moved in with his family to the chawl when he was two. "My first recollection of the festival is from 1967 when I was eight. It was our platinum celebration."

"We had a competition called Anapoorna where a food item was selected. People had to cook special dishes using that item. That day, there were at least 50, 60 dishes prepared and, at the end of the competition, all the residents got to taste the food." 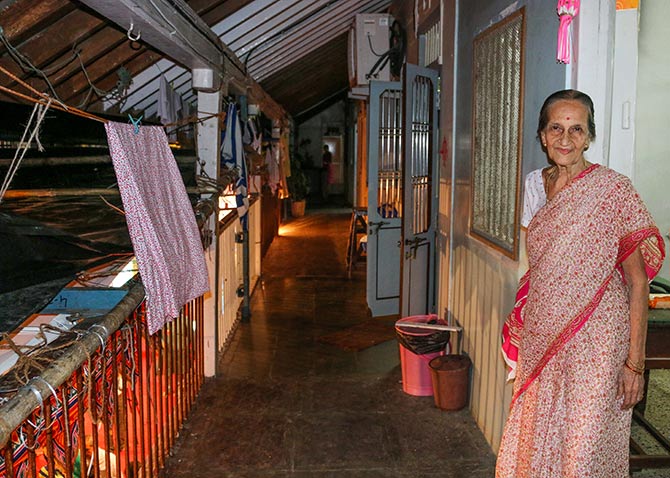 IMAGE: The open verandah running throughout the chawl is an important part of its character. And it looks pretty much as it did over a century ago.

The oldest resident of the chawl is 90-year-old Kusum Sadashiv Gogte, above, fondly called Kaku by almost everyone who knows her.

"For so many years, despite the fights and difference people have, we still come together as a big family and celebrate the festival," says Kaku who has been part of the Ganpati celebrations at the chawl for the last 70 years.

"We had a vacant kholi so, if there was ever a meeting or discussion, it would take place at our home. To avoid any fights and arguments, we'd get a newly married couple -- the first one to be married after the previous year's Ganesh visarjan -- to do the first puja." 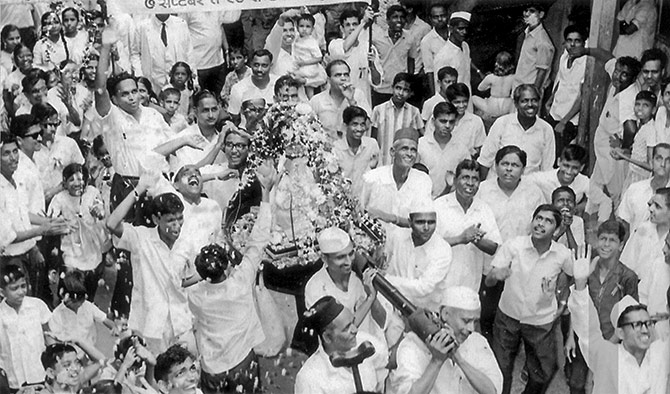 IMAGE: The members of the sanstha, founded in 1893, carrying the palki on their shoulders. The tradition to welcome Lord Ganesha in the palki continues to be followed. Photograph: Kind courtesy Shree Sarvajanik Ganeshotsav Sanstha

Vinay Chothe, 50, who was born in this chawl, adds, "We have a tradition of bringing the idol to our chawl in a palki. It is later taken for visarjan in the same palki."

"The residents walk barefoot when they bring the Ganesha idol to the chawl.

"On the first Sunday of the festival, we have an exercise competition and, for all these years, Kaku has been preparing the 10 litres of special milk to be served post the event for over 80 people."

"Most of the people participate in the competition just to have the milk."

Ask Kaku what's the special ingredient in the milk and she says, "It's the cream. I don't remove that when I prepare the special milk."

Vinay thinks the secret is the love that she makes it with. 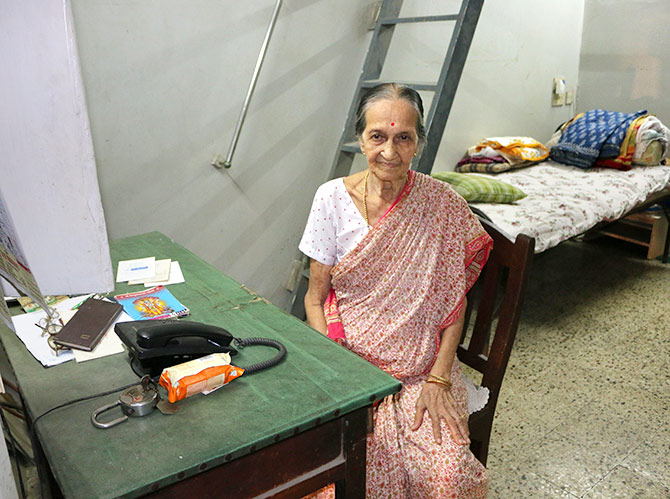 IMAGE: The thought that she is living alone has never crossed Kaku's mind. "The residents of the chawl are my family," she says.

Homes here are so close that Kaku and her neighbour can easily chat, just standing at their doorsteps.

"There was a time when the residents of the chawl never shut their doors," remembers Kaku who maintains that they are her extended family.

"Just the other day, I was standing at the passage," remembers Kaku. "I was thinking about something and suddenly someone called out to me, 'Kaku is there something you need?'"

"They never make me feel that I am alone, even for a single minute," she adds with a smile.

If something needs to be repaired in Kaku's house, she doesn't need to bother getting it fixed. Someone from the chawl is always glad to help her out.

"If something new has been purchased and people don't know where to keep it, they keep it under my cot." The smile never leaves her face. 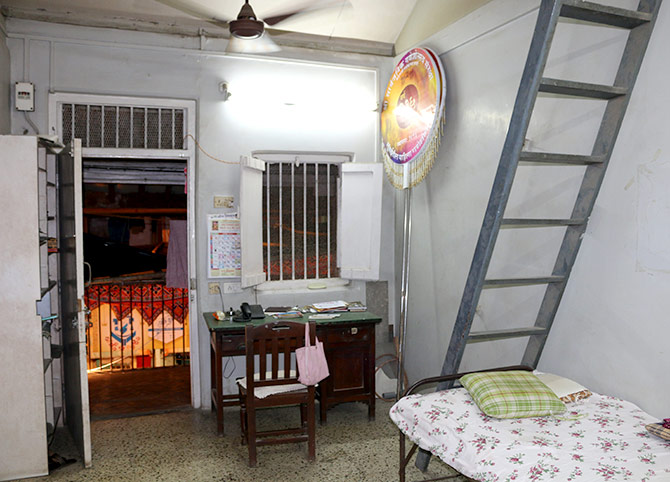 IMAGE: A room in Kaku's house. The ladder leads to a loft, where the palki in which Lord Ganesh is brought, is kept once the festivities wrap up.

Much has changed over the years. The proximity and intimacy the residents shared earlier no longer appeals to the younger generation.

"Now, almost everyone gets their own Ganpati home," says Saptute who feels the place needs to be redeveloped.

"There are very few old people still living in the chawl. It lacks the basic amenities. We don't have a playground for children," he explains.

"I want to buy a car but haven't purchased one because of the lack of parking space."

He feels "change is a must and the residents will have to move ahead with time."

"People started moving out from the '70s. I was an only child, and my wife was happy living here so we stayed back," he says. His children, who are now adults, have moved out of the chawl.

Quiz him about whether the essence of the Ganpati celebrations will remain once the place is redeveloped and he says, "Of course! Don't buildings have Ganpati pandals too?" 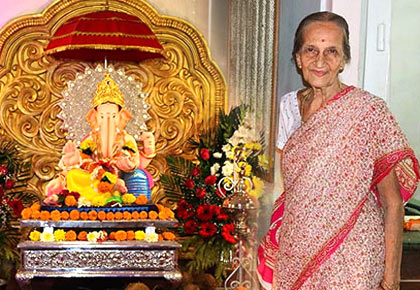 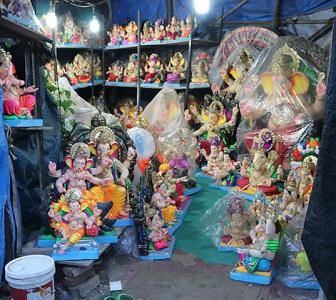 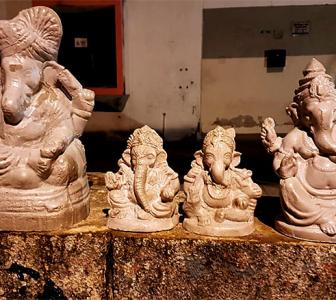 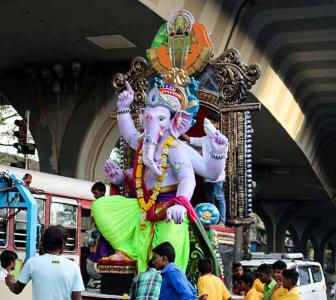 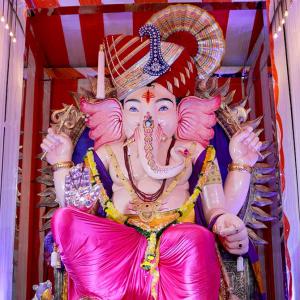 Girgaoncha Raja has an important message for you! 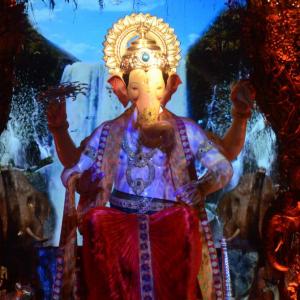 Photos: What to expect at Mumbai's oldest Ganesh pandals