'People don't like me wearing saris. But I am an Indian drag queen. I will wear a sari.' 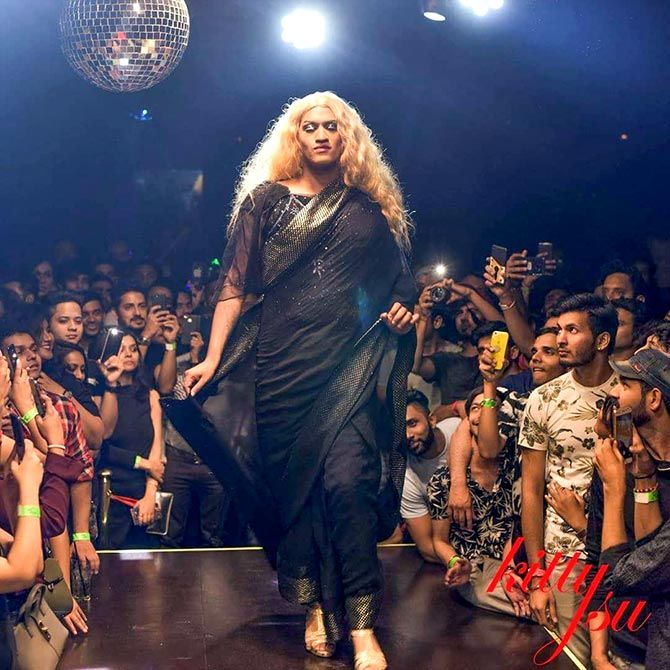 September 6, 2018, is a day that will be etched in Alex Mathew's mind forever.

The minute he heard the Supreme Court's decision to strike off Section 377, he sobbed uncontrollably, releasing the pent-up anger, disappointment and rejection he had faced over the years for being different.

Bengaluru-based Alex Mathew, 29, is gay and performs as a drag queen.

The Supreme Court verdict brought back memories. He remembered the times he'd go on stage as a performer and yell, "One down, 377 to go."

At that time, it was a rant. Today, it is a reality.

"I turn 30 next month. It feels good to reach that milestone as a free person. It is the best gift ever."

Despite the happiness the verdict brings, Alex knows the road ahead is tough.

"This is just the beginning," he says. "We have a lot to achieve in terms of marriage equality, education as far as the community is concerned and awareness among the masses."

A friend once asked him, 'Are you willing to take the 50 years of struggle that might come with it (fighting for the rights of the LGBTQ community)?'

"I said, 'Yes! Even if I'm on my death bed, I'd be willing to fight for the cause of the community.'"

In a conversation with Anita Aikara/Rediff.com, Alex talks about the complexities and hypocrisy of Indian society and how he hopes to fix it.

Rejected for being gay

He first came out to his parents in an e-mail and their reaction was not exactly what he expected.

The day, he recalls, was a heady mix of exhaustion, disbelief and disappointment.

His father told him his sexuality is a sin. His mother called him up and couldn't stop shouting.

"We kept fighting for almost a year. But, with time, they got to know this is not just a passing phase and that's when they started understanding me."

It took almost 25 years for Alex to know himself better.

"It may take that many years for them to get to know me too," he says with a hint of optimism.

For Alex, sexuality is fluid. He initially came out as a bisexual and is now openly gay.

"People often get confused with my drag persona and me being gay. They ask me if I'm a transgender and I say, 'No, I'm queer.'" 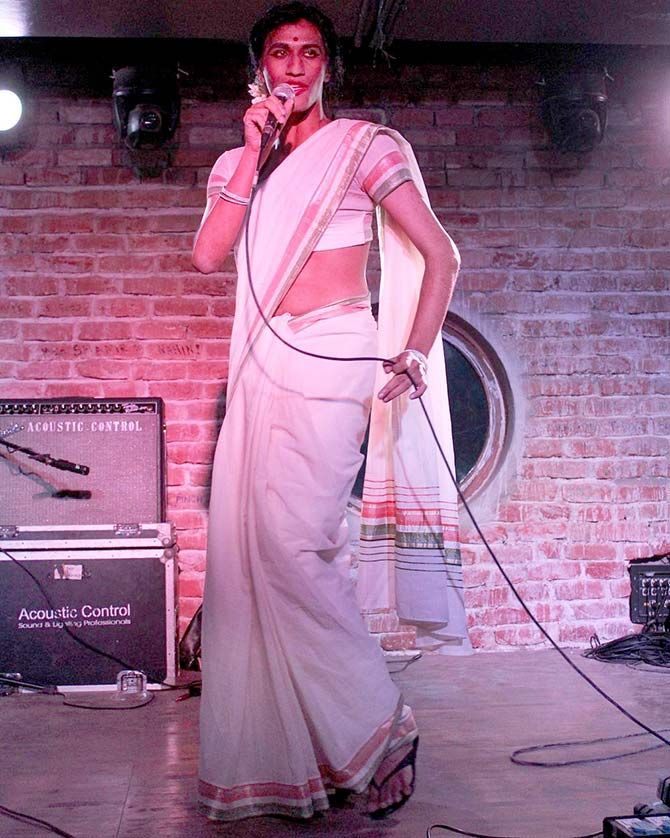 IMAGE: One of Alex's initial performances as Maya.

When it comes to his job, Alex feels that people fail to understand he's a professional.

"But there is something called work-life balance too," says Alex who has already been rejected at a couple of job interviews because of his sexuality.

Once, when he applied for a marketing and recruitment job which required him to go and visit colleges, he was turned down even without being interviewed.

"The moment they got to know I'm gay, they felt that I would be feminine and get hurt easily by people making fun of my body language. They arrived at that conclusion without even interviewing me," he says.

Another time, when the company Alex was working with came to know he was gay, they kicked him out of the job.

"My life is on Facebook. People can Google and find out more about me," he explains.

There was a time when people weren't ready to retain him. No one wanted to hire him.

"Often people react, saying, 'OMG! You are gay.' They feel I'll convert them,' says Alex, who has never let rejection spiral into a full-blown pity party.

"They thought of me as their 'bro' or someone who'd hit on them. I actually have to clarify that I'm not into them," he says with a laugh.

"People think that gay men are sexually starved and will grab any man who walks in. They feel we are diseased."

Born in Thiruvananthapuram and raised in Kochi, Alex moved to Bengaluru when he was 17.

He returned to Thiruvananthapuram later to pursue an MBA. He worked for almost a year in Hyderabad and has, since 2012, been in living Bengaluru.

He presently works as a PR and marketing executive.

Welcome to the world of Mayamma, the drag queen 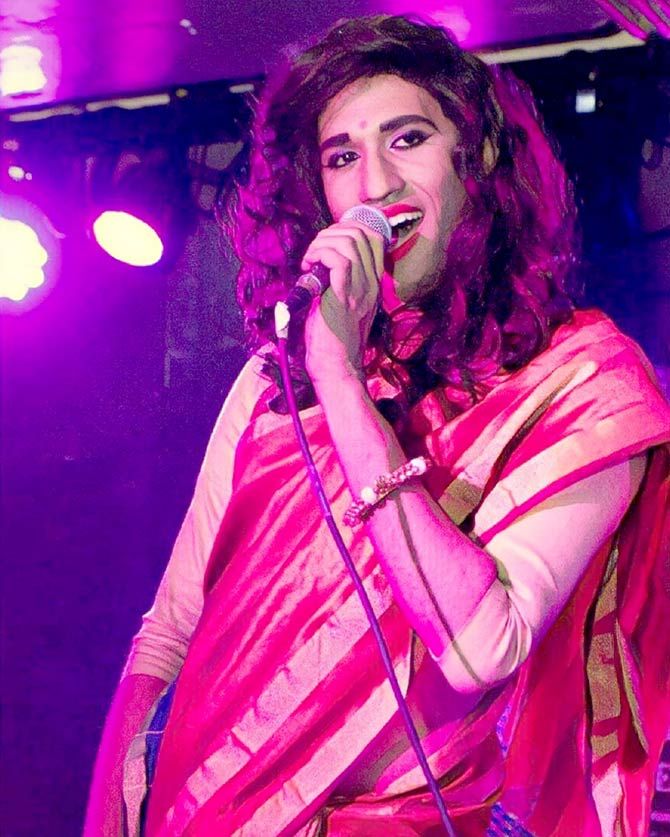 IMAGE: Alex is a PR executive by day, and a drag queen by night.

Dressed in a cotton sari, Mayamma or Maya (Alex's drag persona) will floor you with her thick Malayali accent.

Jasmine flowers adorning her hair, a huge bindi on her forehead and her lips painted red, she sings, dances and acts on stage as a 'elegant' Malayali woman.

On regular occasions, Maya is dressed like a Malayali kitty party aunty. The Kasavu sari (cream, with a gold border, usually worn by Malayali women during festivals) is reserved for a special act.

She refers to her audience as 'Kuttys and Kuttans (girls and boys in Malayalam)'.

"The name Mayamma is inspired from the Malayalam movie Maya Mohini," explains Alex. "In Sanskrit, Maya means 'magic' or 'illusion'. 'Amma' means 'mother'. So the name translates to 'mother of magic'."

WATCH: Why Maya looks best when she is dressed like an aunty

When he was young and Bunty Aur Babli had just released, Alex danced to the song Kajra Re as a guy.

After 20 years, he performed on the same song for his debut as Mayamma.

"There was that whole bit of a boy who wanted to express his femininity, but didn't know how to do it. Years later, I found a way of celebrating my feminine side through drag."

As far as he is concerned, Alex and Maya co-exist beautifully.

"All what you see of Maya is saved in Alex's personality. And it is through Alex that Maya can shine. Maya wouldn't have existed had it not been for Alex."

Initially when Alex told people about Mayamma, they felt that he was going through a multiple personality disorder. They wanted him to meet a psychiatrist immediately.

"I have learnt to love both sides. I see it as a gift," says Alex, who completes four years of performing as Maya this week.

He is a huge fan of Madhuri Dixit and Sridevi and credits his calling to both these Bollywood divas.

"I have also done a photo shoot as a tribute to them," he says. 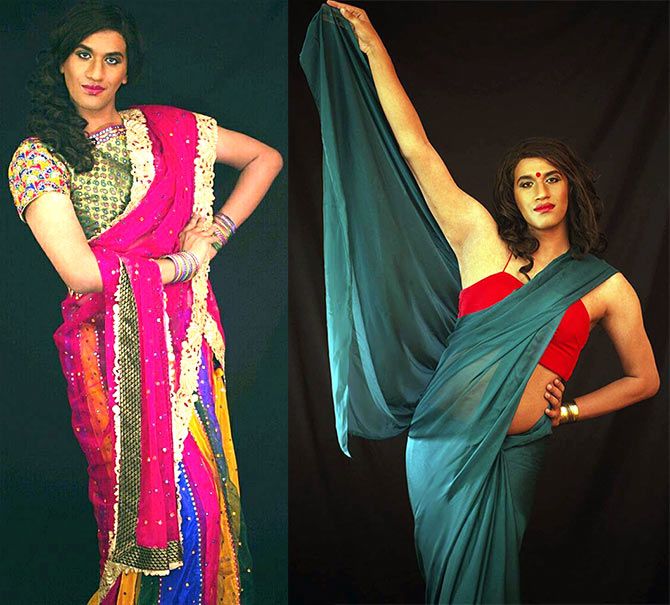 Being chased by straight men

It can be awkward to be the subject of unsettling adulation of subversive men.

'Baby, I want to take you out for dinner,' they tell him.

"People want me as Maya, but that is never going to happen," says Alex who has never stepped out in his drag persona after a show.

"Getting back home can be dangerous. I constantly fear I might be stalked and followed."

As a precaution, he always gets ready at the place he performs and leaves the place as Alex, not Maya.

"Abroad, you can actually travel by subway in your drag getup. But that's impossible in India.

"It is unsafe. Even without the getup, they all give you the look."

Being a drag queen is more than cross-dressing

Since the advent of Section 377, hotels in the city were reluctant to do drag shows.

"People who didn't care about my existence are now calling me. They feel it's time to bring in the queens and monetise the LGBTQ community. These people never really wanted to uplift the community. It was always about the money.

"People often assume that I'm a drag queen who does a lot of skin show. They don't actually take the initiative to get to know me or know the character.

"A lot of people use derogatory terms too. They say I look like a eunuch. But I know what I look like. I don't take their comments personally.

"People don't like me wearing saris. But I am an Indian drag queen. I will wear a sari." 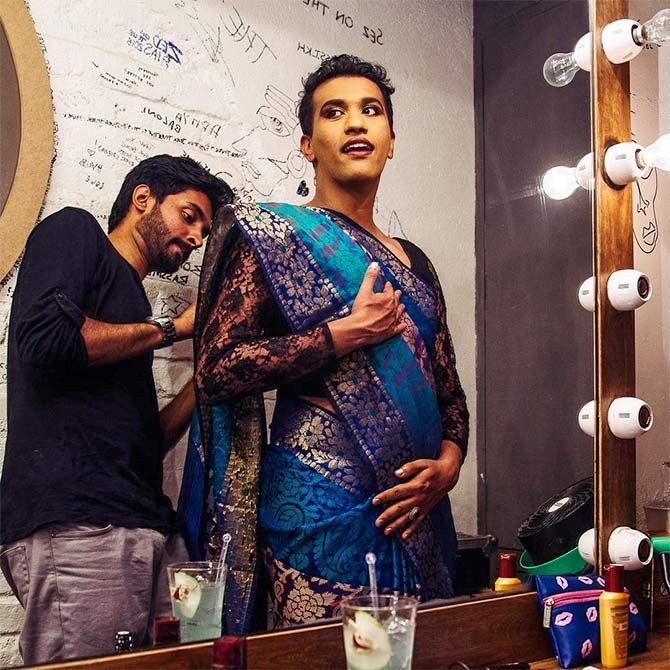 IMAGE: Behind-the-scenes: Alex gets ready for a drag performance.

Alex is calm and understanding when he mentions his family and the struggle to gain their acceptance.

He is hopeful that, some day, his parents will sit in the front row and watch him perform.

"All my shows run late into the night. My father works and, once he gets back home, he hates to step out again.

"My mother wants to come, but wants my father to tag along."

Initially, when Alex started doing drag shows, his parents were dead against his decision. "They just didn't understand what I was doing."

Today, his mother packs his suitcase when he leaves for a performance.

"Her favourite actress is Rekha. Once she got to know that I was performing a tribute to Rekha and she wanted me to dress up like Rekha did in Khubsoorat," he recalls.

This change didn't happen overnight. It took a lot of patience and perseverance on Alex's part.

"I come from a Christian Malayali family. There's a lot of conditioning that takes place.

"For me to say that I am gay and a drag queen was a double-edged sword for my parents.

"They were like, 'Oh! What does that even mean? Now you are transitioning into a woman?'

"They wanted to know if I was cross-dressing everyday. I had to explain to them that it is just for a show.

Alex's heart belongs to Broadway and he eagerly waits for a chance to visit New York and perform there.

"My ultimate dream is to build a school in India, where children won't need to focus on just being an engineer, doctor or accountant.

"They can focus on being artists.

"I was comfortable with myself and that's how I got to know I am queer. Every child deserves that chance to discover themselves." 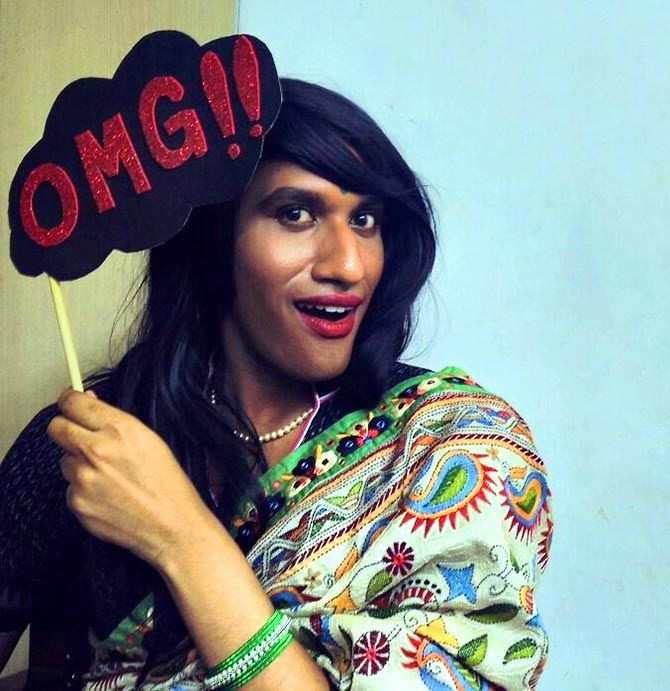 IMAGE: Alex before a TEDx talk where he spoke 'about breaking stereotypes against the drag community and following his heart'.

Alex feels that there are different shades of being gay and it's time Bollywood actually got to know them better.

He was in school when Dostana released. "It perpetuated Bollywood stereotypes about the community, where gay men are supposed to be feminine.

"Gay men are not always very flamboyant," he argues. "Some of us don't walk in an effeminate way and not every gay person is obsessed about shopping.

"A lot of people look at me and say, 'We didn't know you are a drag queen.'

"That's true. It's not written on my face. I am like a regular person during the day," he says.

WATCH: Who is a drag queen? Maya demystifies it for you!

Alex intends to keep on entertaining people with his drag persona, despite the struggles that come with it.

He also takes his job as an advocate of the LGBTQ community very seriously. The acceptance he receives is its own reward.

"The journey has just started," he reiterates. "There's a lot that needs to be achieved."

"Marriage equality is important. And we can't ignore adoption. What about surrogacy and life insurance?" he asks.

"What if I am to marry a guy? Will I still get a share in my parents's property?"

The key, he thinks, lies in "educating people about the LGBTQ community".

For those who are still struggling with their sexuality, Alex has a simple message: "Love yourself. Have courage and be kind. Give love and you'll get it in return." 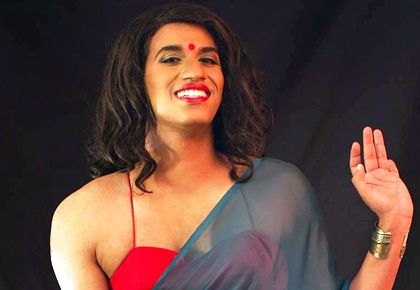