'I couldn't conceive after 5 yrs of marriage'

We'd asked you, dear readers, to tell us how you fought endometriosis.
Rediff reader Uma Parameswaran from Nagpur shares her story. My periods have always been painful and I used to take baralgam every month on the second day.

But I was able to perform my day-to-day activities like cycling, going to school and college. I'd also play volleyball daily.

I never took it seriously until I got married.

I have always loved children.

When I was small I used to go to my neighbour's place to play with their babies.

So, I was really depressed, when after five years of marriage, I realised that I could not conceive.

I underwent a lot of tests and treatments like tube testing and what not.

When I underwent tube testing, I was 25.

The doctor told me that one of my tubes was stuck to my uterus, but she did not tell me anything about endometriosis.

When I lost all hopes, Dr Shobhana Devarajan came in to my life like an angel. (Unfortunately, she has passed away into the ages).

Dr Shobhana performed a laparoscopy and immediately diagnosed that I have severe endometriosis. I was 28 at the time.

She put me on medication for 6 months which stopped my painful periods.

Six months later, when I didn't get my periods, I was anxiously hopeful.

Dr Shobhana advised me to wait and watch.

When she finally confirmed that I was pregnant, it was nothing short of a miracle for me.

But the real trouble had only started.

After three months, I started to bleed.

I thought I had lost my baby when I was rushed to Mamta Maternity Home in Ghatkopar, Mumbai.

Dr Shobhana told me not to worry and I was kept in the hospital for a week with my feet elevated.

She advised complete bed rest as I was diagnosed with placenta praevia.

I was told that the symptom was a rare one and in most cases, after the seventh month, the situation turns out to be normal.

I was advised to take maximum possible bed rest with my feet in elevated position.

On September 15, 1988, I started bleeding very heavily and had to be rushed to the hospital at 11 in the night.

As I could not provide an accurate last menstruation date, the date of delivery was tentatively worked out to be around October 6.

But after sonography, it was confirmed that I was 30 weeks pregnant and the new date of delivery worked out to be around the mid of November.

Since we could not afford staying in the hospital for 2 months, I requested to be discharged.

We shifted to a relative's place nearby but I had to come back to the hospital the same night because of excessive bleeding.

Much against my choice, I stayed in the hospital from then till my delivery in mid November.

However fate had other things in store for me.

On October 5, I had a bout of vomiting, which further triggered the bleeding.

It was decided to do a C section.

When I was taken to the operation theatre, I had fits and my blood pressure came down drastically, forcing the doctor to do an emergency operation and take out the baby.

I was shown a glimpse of the baby and she was transferred to neonatal ICU hospital with an oxygen mask.

I was later told that during the above emergency the oxygen supply to the baby had gone down beyond the permissible limit.

My baby girl was in the ICU for almost 10 days before she was reunited with me.

I took great care of my precious one for the next 6 months. I wouldn't allow anyone to touch her fragile and tiny body.

Twenty one months later, I had a full term second baby by C Section. It was a baby boy this time.

I dealt with endometriosis for the next 15 years of my life.

Finally when Dr Shoobhana found out that I was going into depression, apart from regular mood swings, at the age of 42, I was advised to undergo hysterectomy.

She'd said that my ovaries had rotten and they had to be removed.

Looking back, the year 1988 was a nightmare for me. But whenever I see my daughter’s face, I feel that each and every pain I suffered is worth it.

My first born has grown into a beautiful woman today. She had a normal delivery and gave birth to a girl child on February 8, 2018.

Today, I am 60 and leading a healthy life with my two beautiful children.

I thank my angel Dr Shobhana Devarajan who diagnosed and treated me in time. In India, approximately 25 mn Indian women suffer from endometriosis, characterised by excruciating pain that affects the abdomen, lower back or pelvic areas during their periods.

Have you suffered from endometriosis? What's your story?

How and when were you first diagnosed with the condition?

How did you cope? What did you learn from it?

Simply write to getahead@rediff.co.in (subject: My Endometriosis Story) along with your NAME, AGE, LOCATION and a photograph, if possible. We'll feature the best ones right here on Rediff.com. 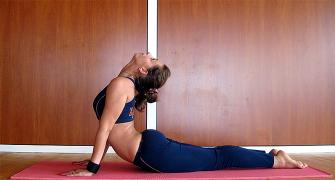 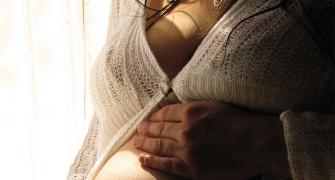 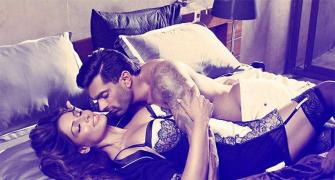 Why men are missing from fertility debates Why Padma wants you to talk about endometriosis