News
Business
Movies
Sports
Cricket
Get Ahead
Money Tips
Shopping
Sign in  |  Create a Rediffmail account
Rediff.com  » Getahead » Have you ever seen a Durga idol this tall?

This Durga Puja, the world's largest Durga idol will be installed at the Deshapriya Park in south Kolkata. 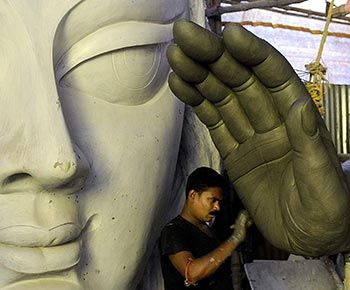 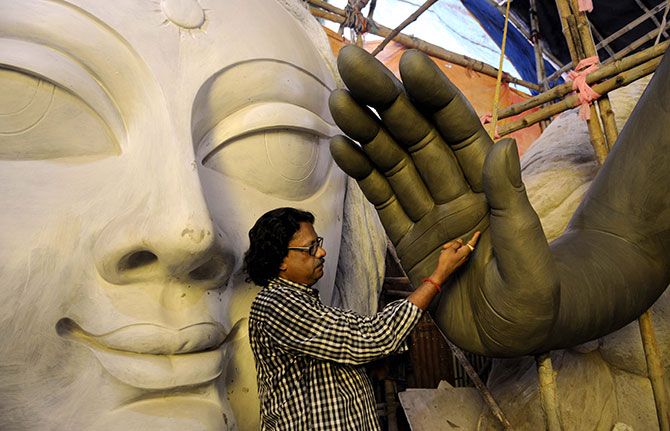 Artisan Mintu Pal is working round the clock at the Deshapriya Park Puja Committee workshop in Kolkata.

A teaser advertisement like this was doing the rounds of Kolkata since August.

While some thought it to be a telecom company advertisement, others felt it was about the tallest residential building that is about to come up in Kolkata soon. Artisans give shape to Goddess Durga's bahana -- the lion -- at the Deshapriya Park Puja Committee workshop in Kolkata.

Star Cement revealed recently that the teaser was its campaign for the world's largest Durga idol to be installed at Deshapriya Park in south Kolkata.

"This year, Kolkata will see an idol of Goddess Durga that will touch the sky. Star Cement and the Deshapriya Park Puja Committee are the joint organisers of this event," said Sanjay Kumar Gupta, CEO, Star Cement. 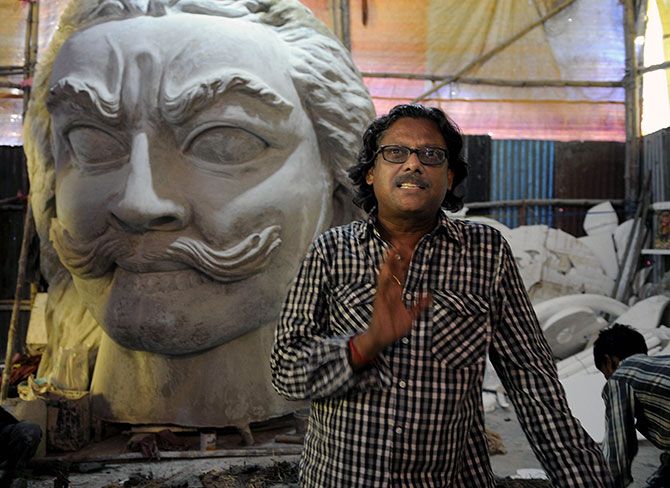 Artisan Mintu Pal stands next to the idol of Mahishasura at the Deshapriya Park Puja Committee workshop in Kolkata.

The towering idol has been created by Mintu Pal, one of the prominent artisans of Kumortuli, where idols are made.

"This is an exciting challenge for me," he told Rediff.com 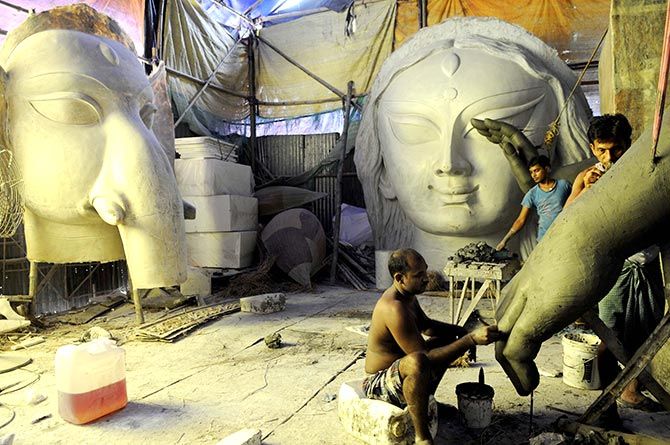 About 40 artisans were at work at the Deshapriya Park Puja Committee workshop in Kolkata.

The fibreglass idol will be transferred to a huge platform at the centre of the park. 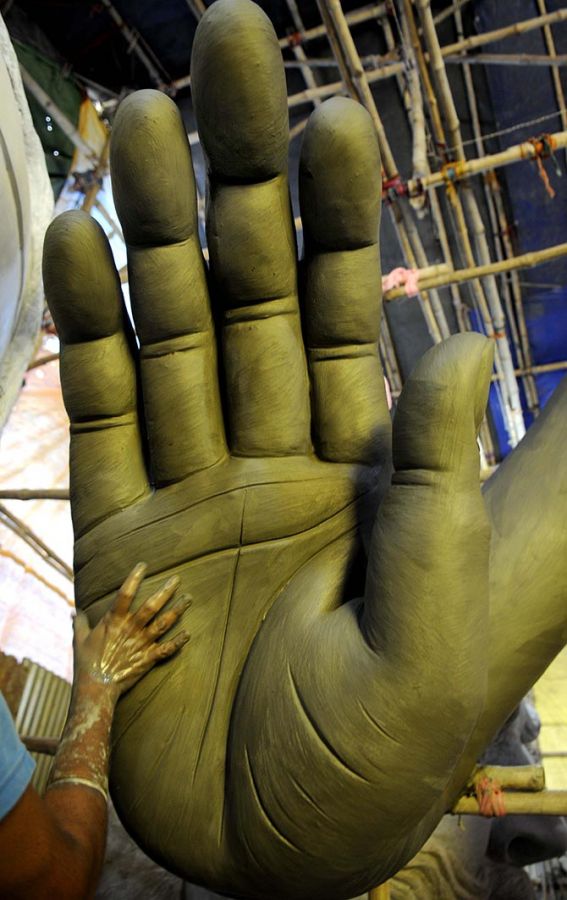 An assistant rubs clay on the fibre-glass hand of the idol.

This year, Pal is all set to break his own record. This idol will be close to 100 foot, the artisan said.

He was in China recently to witness the making of the tallest Buddha statue (250 feet). 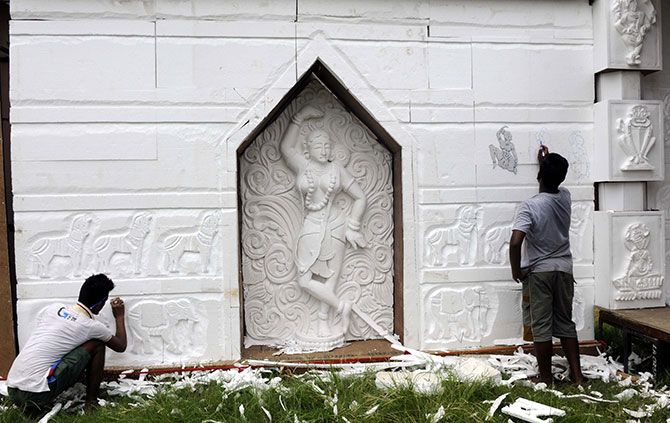 Artisans give final touches to the pandal at the Deshapriya Park in Kolkata.

Though the organisers are not giving away details of the budget, Star Cement is said to have already spent Rs 2.5 crore (Rs 25 million) for the teaser ads. 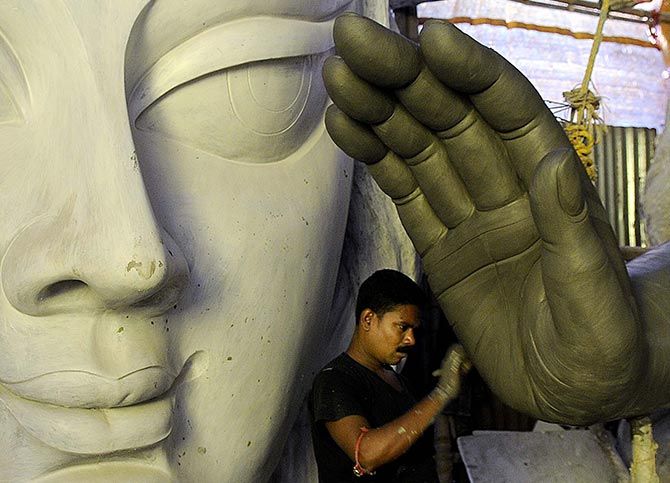 An artisan adds finishing touches to the idol.

The Puja committee is taking precautions for crowd management and security during the four days of the festival, starting October 19.

The Puja organisers have also applied for a certificate to the Guinness Book of World Records and eagerly await ratification. 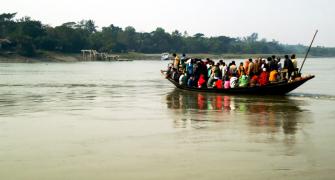 To the beat of the dhaak, Kolkata set to welcome goddess Durga 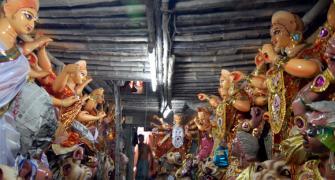 A visit to Kumortuli, place where gods are made 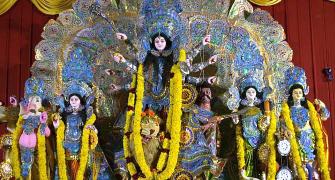 Celebrating the Goddess in Chennai 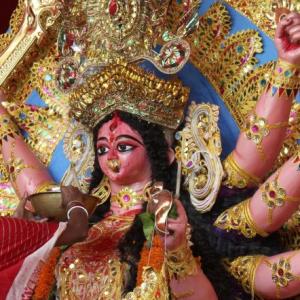 Why this Durga Puja in Kolkata is different