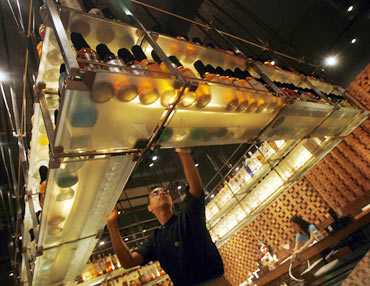 Pubs in Delhi are holding private drink unions and whiskey parties for school students, defying a government ban on serving the under-aged.

The parties, popular as Conti, are a huge draw among the 11th and 12th graders. They use the opportunity to flash their coming of age, and to declare their 'me too' status among their peers.

"It is trendy...You got to be in it to be counted!" say students who have had their moment under the sun.

Obviously, the students are very demanding when it comes to the Conti. They want it organised in the best of places. They want the meanest DJs in town. They want the deliberately loud dress codes. No less, they want the booze and fag!

The bigger the school league, the wealthier the community of the student, 'the more obscene the demand,' says Lakshya Gujral, a pupil of Merry International School in Rohini, North West Delhi. He is one of the few youngsters who says he 'resent(s) the liquor clan.'

Pub managers are, of course, happy to bite. It is good money for them in the hard times. Reporters who posed as students to call some of the popular bars in the city were told it could cost upto a lakh of rupees for a liquor party.

"We charge Rs 1,000 for a student. Liquor charges are extra based on how much is consumed," Jitendra, the day manager of a bar in Chanakyapuri, Central Delhi, told a reporter staging the call.

Similar kinds of response came from other bars as well. Indeed, not one of those contacted turned down the request. Vikas Choudhury, an executive of a bar in Bhikaji Cama Place, South Delhi, said there was no problem serving alcohol to students.

Hemlata, a hostess at a bar in Malcha Marg, Central Delhi, said yes to alcohol too.

Just this year, p3party.com, a popular party organiser with a base in Delhi, has had 12 requests from school students seeking drink and dance arrangements.

"We had to turn them away," says its promoter Utkarsh Mittal.

For the record, of course, the law against serving those below 25 is well stated. All bars dutifully display boards proclaiming obedience of the law. But that is just as far as it gets.

A recent study by a non-governmental organisation, Campaign against Drunken Driving, found there has been a sharp rise in underage drinking in the past decade.

"Nearly 85 per cent of the youth who had taken to drinking were between 14-21 years of age," CADD programme initiator Prince Singhal says.

For the violating pubs, the going is easy. The parties are fiercely discreet affairs organised by students without help, advice or permission of the school authorities.

"The teachers can govern us within the school premises and during school hours. What we do outside is none of their business," a student of a top public school says after being promised anonymity.

The lawmakers are also at ease. Delhi Finance Minister Dr A K Walia, who governs the liquor trade, says, "I have no knowledge of such violations... I will act if these are brought to my notice."

Education Minister Arvinder Singh Lovely is reticent too. "This is outside my jurisdiction," he says. "I can only monitor the activities inside the school."

The Conti is now part of the regular student lexicon, familiar even to teachers and parents. But most of them are unaware of its hard dynamics and undercurrents.

In 2009, a student of a school in Mayapuri, West Delhi, was thrashed by his classmates during a Conti. He held his grudge for a whole year, bidding time. Then he saw his chance to get back at his tormentors when they returned to organise a Conti.

He assumed a name, created a fake email id, bought a SIM card for his phone, and using the false identity, tipped off the press and the police. He even had his girlfriend planted inside the reserved club area to take photographs and to keep up a running line with him as he paraded impatiently outside, waiting for retribution.

Sanjay Chug, a clinical psychologist, has been dealing with many of such cases. He says 30 to 40 parents have come to him in the past three months, looking for help to handle children who returned home drunk and out of control after a Conti.

"Most of the parents had erred in believing the Conti was a harmless, fun-time affair. They were completely in shock...stunned by how it had eventually unfolded!" Dr Chugh said.