News
Business
Movies
Sports
Cricket
Get Ahead
Money Tips
Shopping
Sign in  |  Create a Rediffmail account
Rediff.com  » Getahead » Tour the world's finest museums from the safety of your home

Tour the world's finest museums from the safety of your home 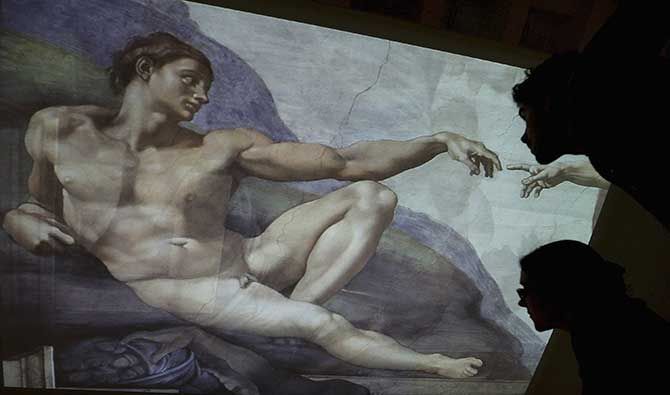 IMAGE: Museum staff look up at a projection of Michelangelo's Creation of Adam at the Michelangelo Drawings. Photograph: Peter Macdiarmid/Getty Images

The virtual Mona Lisa is as boring as it is exhausting to get to in reality: It's smaller than you had imagined, the painting is less impressive than others lining the walls that lead up to it, and the space is crowded with people taking selfies.

It's hidden behind a sheet of museum glass, creating further distance between you and Leonardo da Vinci's alleged masterpiece.

But the hype is so overwhelming, it's the first masterpiece virtual visitors go looking for.

My attempt to find an 'official' virtual Mona Lisa online tour doesn't pay dividends -- the Petite Galerie Louvre requires someone more agile than me to navigate though its lineup of Delacroix, Rembrandt and Tintoretto is impressive.

But, sorry, no da Vinci, no Mona Lisa. 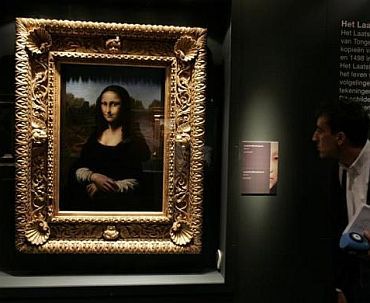 class="credit">IMAGE: The Mona Lisa, by Leonardo da Vinci, at the Louvre in Paris. Photograph: Francois Lenoir/Reuters

Fed up of trying to find a less crowded tour of the Louvre, I make up for lost time and opportunities at the National Gallery of Modern Art in New Delhi, right next door to the Delhi high court, where I practise.

Yet, the last time I visited NGMA was for a Kerala fundraiser where we were hoping to snap up works, not view them, and I haven't been to the galleries since.

So now seems like a good time to show up as a virtual visitor courtesy Google Arts and Culture and other line-ups.

Unfortunately, I ask my father to join me -- 'unfortunately' because he seems to know the spaces and works intimately.

"Here," he says, "my favourite work by M F Pithawalla", extolling the realism and the source of light in the portrait.

"Look," he exclaims over the romantic washes of Abanindranath Tagore.

"Up, up," he coaxes me to the next level, to surrender ourselves to Rabindranath Tagore, Amrita Sher-Gil and Jamini Roy; on, then, to the Progressives, as he excitedly points out the Husains, Gaitondes and Aras; resting, finally, before Tyeb Mehta's stellar triptych.

By now, I'm feeling as murderous as Souza's depiction of Eros Killing Thanatos, and beg off saying I'm expecting a call from a client. But the enthusiasm is infectious.

That evening, I tell my wife we are going to the British Museum, which I visited a few years back.

"I'll show you my favourites," I said.

But she isn't a museum aficionado, so I'm left to pick my way through the exhibits alone, reliving the experience of several summers ago.

But it is at Tate Britain that I find myself happily lost.

If there's one thing the British know it is to spin a yarn -- and so, even though I'm not the least bit interested in why Christopher Nolan was inspired by Francis Bacon, I watch the film.

I can also claim expertise on 500 years of British art, from the 16th century onwards -- go on, ask me if I know how the treacherous Captain Thomas Lee proclaimed his loyalty to the crown by commissioning Marcus Gheeraerts to paint his portrait; or how the early Modernists responded to fascism in Europe. My parents's somewhat eccentric habit of dragging us to museums as children while travelling was annoying.

We'd rather be shopping, or dining at cafés, instead of being dragged off to view a David here, a Last Supper there.

They couldn't walk past a museum without peeking in -- a killjoy when every neighbourhood in Europe has scores of them.

But now, in a rush of nostalgia, I recalled our visit to the Sistine Chapel -- and the crowds, oh, those jostling, elbowing, claustrophobic crowds from around the world.

"See," said my mother, pointing to some distant part of the ceiling, "see!", when all my sister and I wanted was a Coke.

Why a painting of God and man pointing fingers at each other should form the highlight of the day was a mystery to me.

But, now, I navigated my way virtually into the same room, probably the very spot where we had stood, and zoomed in on The Creation of Adam, so marvellously painted by Michelangelo in the early 16th century.

This, I tell myself, is the way to view a museum, sans people, with a tumbler of whisky in one hand, popcorn by the side. 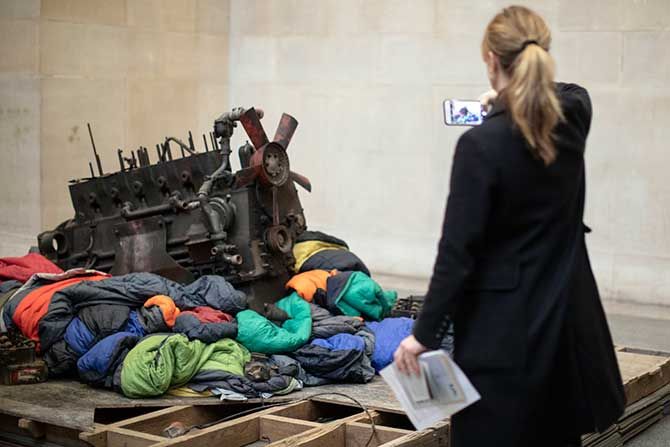 My armchair museum travels take me next to The Met in New York.

I was briefly in the city a couple of years back and spent it in dissolute pursuits, but fibbed that I'd been to The Met, MoMA and the Frick on my mother's insistence.

The Met blows me away with its scale.

Navigating isn't easy, since I'm not familiar with its layout.

Do I go left, or up, out on the roof, or down some corridor?

At any rate, I can now throw in nuggets about the Temple of Dendur, historical facts about its Asian collection, and carry on a knowledgeable discourse on Paul Gauguin's Tahitian sojourn and the beginning of Modernism.

Quiz me on Paul Cezanne or Pablo Picasso at the Museum of Modern Art, and I'll come off like a nerd with all the facts.

Nope, not done the Frick yet, but the next stop is the Guggenheim.

It's a tug of war between Netflix (so seductive) and turning into a museum junkie.

Coasting through the Google Arts and Culture menu, one spots iconic images that have informed so much popular culture.

There's Edvard Munch's The Scream, for instance, which draws me into The Munch Museum in Oslo, with a selection of Munch works on view, but also an exhibition on Expressionism, which he influenced to such a large degree.

Even though the images are static, the visit is a revelation.

I steer my way to the Paul Getty Museum if only to better view Vincent van Gogh's Irises, which illustrate the coffee mug Dad has his morning coffee in.

Does he know van Gogh painted it while in an asylum? 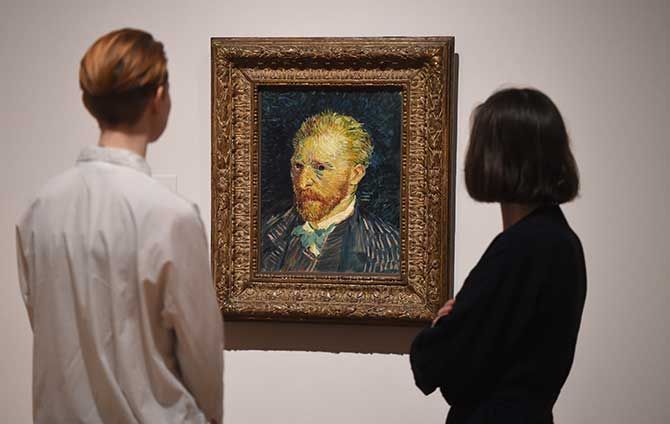 By now I'm flagging the galleries I need to spend more time in -- Florence's Uffizi, the Musée d'Orsay in Paris, the State Hermitage and the State Russian Museum, both in St Petersburg, the Frida Kahlo and Reina Sofia museums in Mexico and Madrid, respectively.

I know I want to reserve time in the Hall of Mirrors, the huge folly created by the Sun King, Louis XIV, in the Palace of Versailles.

Perhaps a virtual visit to the Anne Frank House in Amsterdam will serve as a reality check.

To gen up on something that interests the inmates of our lockdowned house, I take a saunter to the exhibition on Indian textiles in the grande dame of museums, the V&A in London, complete with information on its 4,000-year-old-history, the indigo dyers, block printers, brocade weavers and more.

Unfair, though, I think, to spend so much virtual time in the global world when it could as easily be spent in the neighbourhood.

This time, though, it's almost enjoyable, given the friendly information, and the ability to stop, stare and navigate at will.

I find it more interesting than the Chhatrapati Shivaji Maharaj Vastu Sangrahalaya in Mumbai.

When all this is past, and we're free to commute, or travel, again, I'll be back -- but as a virtual visitor. 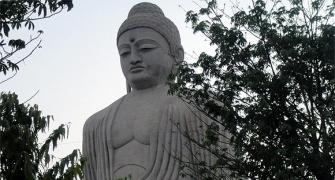 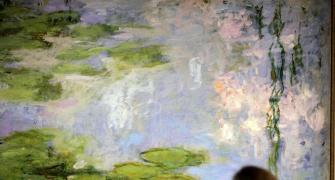 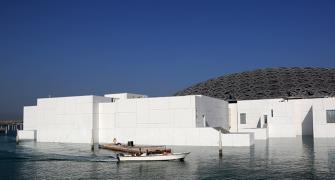 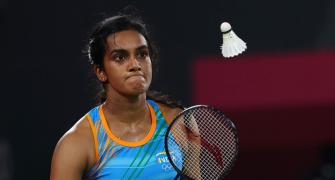 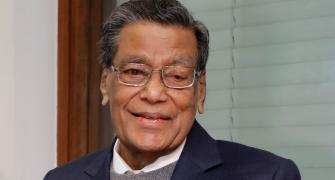 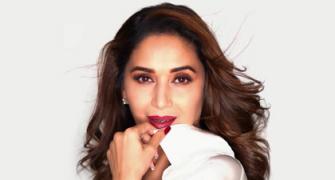 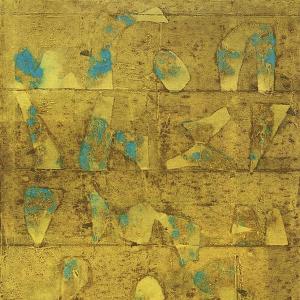