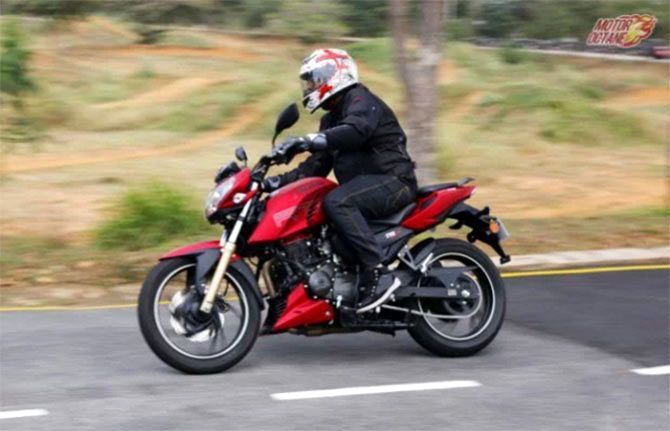 TVS as a manufacturer tends to do things differently from the competition. While the latter is busy churning out motorcycle models at full-throttle, the Hosur based manufacturer prefers to take its time, getting things right on every possible front. But when they do get a model out, they do so with a bang.

We've experienced this closely, with the relaunch of the Victor range of executive motorcycles as well as their range topping, Apache RTR series. Known for their brisk performance, sweet handling and strong styling cues, TVS has now introduced the much awaited 200cc flagship, called the Apache RTR 200 4V.

Slotting in-between the now discontinued Pulsar 200 NS and the Duke 200, TVS is confident that the Apache 200, will wear the flagship crown with pride. We were present at TVS' short but fun test-track in Hosur to get a first-hand feel of things. 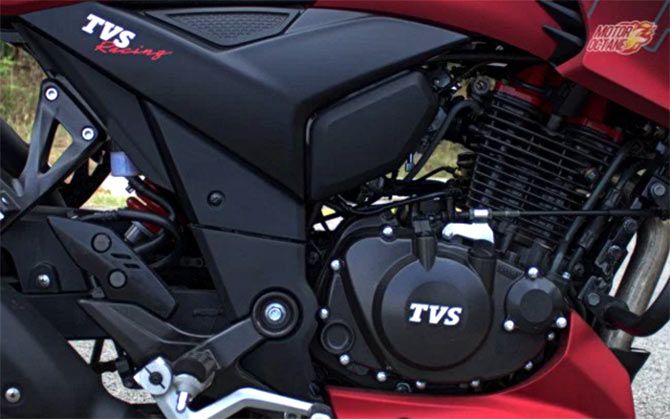 The single-cylinder 198cc motor may be only 20cc above the old, Apache RTR 180 but TVS have pushed the design and performance envelope, giving it enough character to put it in a class of its own.

For starters, the motor which develops 20-odd ponies and about 18 Nm torque, is tuned to offer usable performance in the real world. 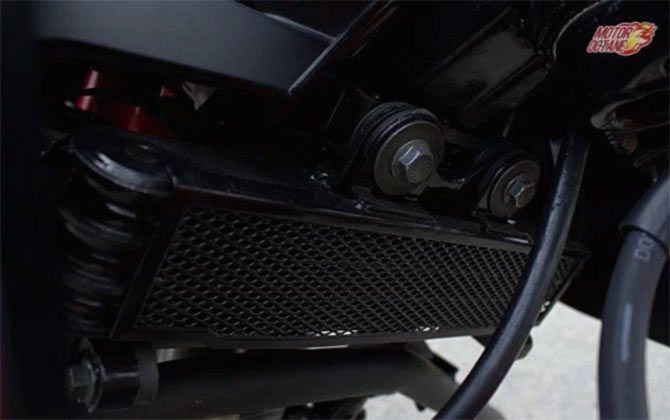 Offered in both, carburetted as well as EFI versions, the oil-cooled engine has a fairly wide power-band starting from 2000rpm and going all the way up to 7000rpm.

TVS categorically stated that they have taken a conscious decision to focus on real world riding on city streets rather than chasing spec-based bragging rights. 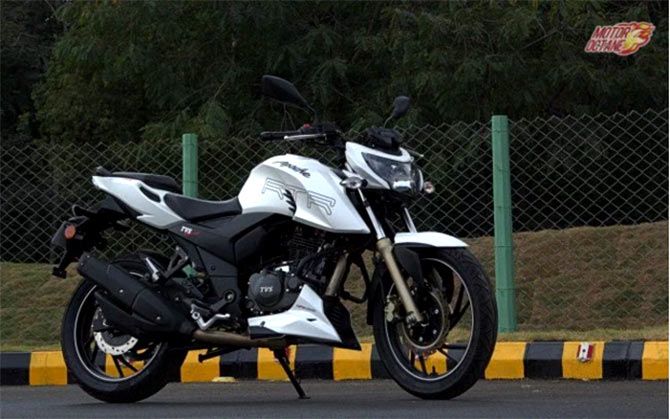 On the styling front, the Apache RTR DNA is present throughout the motorcycle, but it has now been thoroughly updated to bring it to 2016 spec.

Truth be told, pictures don't do enough justice to this motorcycle and the Apache RTR 200 4V is simply stunning to look at.

Up front, we've got the fang-inspired headlamp design, complete with signature LED DRLs. 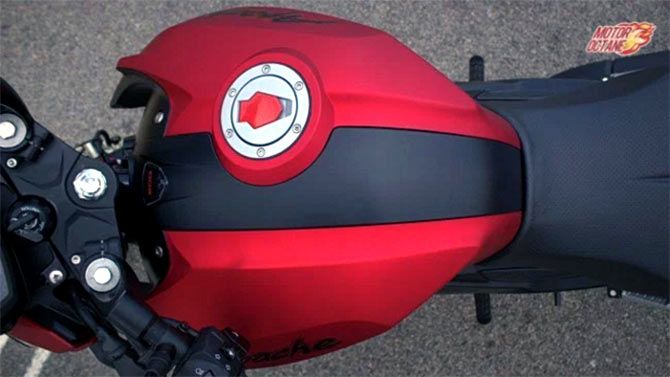 The tank wears a sculpted look and is actually a three-piece plastic cladding based design with the actual, fuel carrier nestled underneath.

The aircraft type fuel lid which is hinged at the rear, sits flush on the tank, in an offset layout.

TVS have finished the keyhole flip cover in a bright red, giving it a striking look. 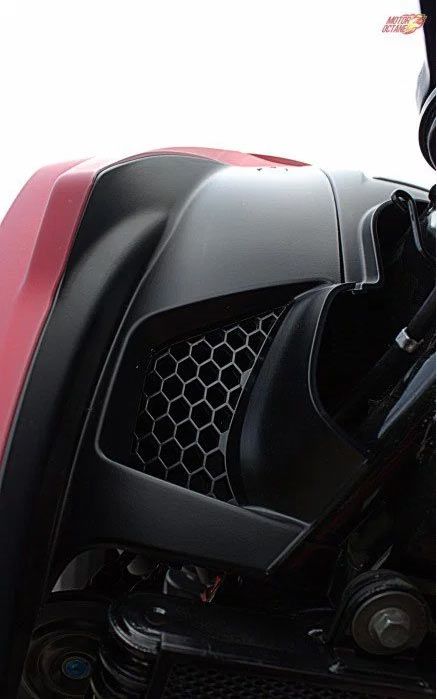 The tank extensions also house the ram-air intakes which force-feed air around the head and block, thereby letting the engine run a lot cooler.

The split-seating arrangement is excellent and well-executed, with TVS having worked upon both, the seat cushioning as well as the material, to offer riders the best feel.

The grab-rail for the pillion has been executed rather well and the rear cowl too is colour matched to the tank. 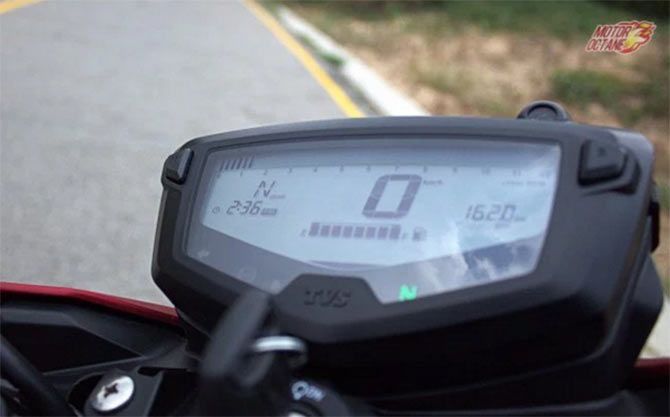 In terms of instrumentation, the Apache RTR 200 4V marks the first time ever for a TVS motorcycle to feature an all-digital console, which includes the speedo-tacho readouts, a trip-meter and an odometer.

The trapezoidal-shaped unit gets an attention grabbing red-light at the top-right corner to let the rider know when they're bouncing off the rev-limiter out on the road.

Buffed levers and high-quality switch gear round things up on this package.

TVS have gone in for a frame that's been designed afresh from the ground up. The company opted for a twin-cradle arrangement in the interests of the best way to make a chassis that's both, lightweight as well as stiff enough for its intended usage.

The KTM is still the undisputed leader on the weight front in the 200cc segment. 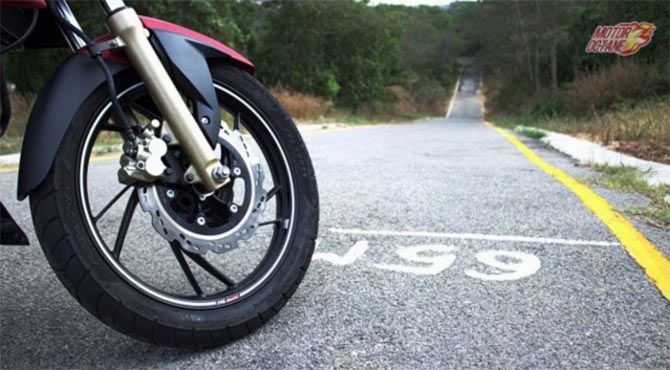 On the suspension front, TVS have given the Apache RTR 200 4V 37mm Kayaba (KYB) forks at the front, while using a mono-shock unit at the rear, for the first time on their motorcycles.

TVS will be offering the Apache RTR 200 with two tire choices -- one being their self-manufactured Remora compound tires, while the other will be a Pirelli setup.

The latter comprises of the Sport Demon at the front, and the Angel GT at the rear. Braking duties are handled by a petal disc setup at both ends (270mm and 240mm, front and rear, respectively). 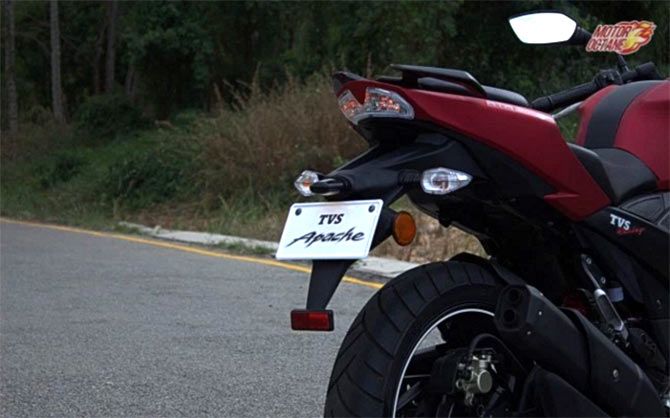 TVS have decided to do away with the kick-starter and thumbing the starter resulted in a meaty idle note. The company revealed that they paid particular attention towards tuning the exhaust note to sound more emphatic in a bid to appeal to the enthusiasts that this bike is aimed at.

Acceleration was brisk and the usable power band was immediately evident when working the five cogs through to the top of the rev range. Riding at the 90-100 km/h range should be no problem at all for the Apache RTR 200.

The sheer level of refinement from the engine at that speed is something that buyers are going to come to love on this machine. 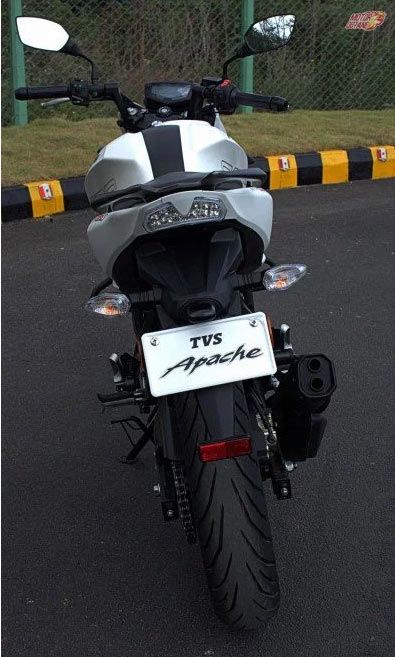 There wasn't much to test the ride quality but the Apache 200 did get the face to light up with the effortless nature in which it leans into corners and changes direction.

The Apache RTR 200 4V tracked true on the bumpier sections of the track, even with the suspension bottoming out at times. Braking too was trustworthy with the bike stopping quite effectively.

While the rear braking was flawless, the brake modulation and lever feel at the front however, needs some working.

Mind you, this in no way affects the braking efficiency, but with the rest of the benchmarks set so high, you kind of expect the same here as well. 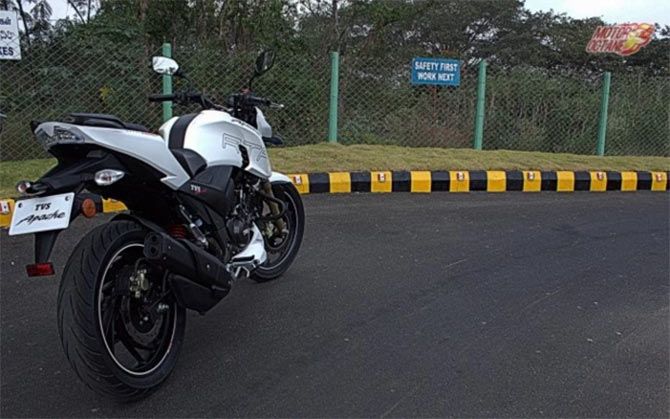 Riding the EFI version, was an even greater revelation. It simply made the carb-version redundant from the time you thumb the starter.

The growl from the exhaust is a mite deeper and the throttle response simply blows the carb-version away.

Right from the word go, there was a close to 5 per cent difference in the time and speed that I could carry on the track, and by the end of the short-session with the EFI variant, I'd stretched that gap on some sections to over 10 per cent.

The confidence over the crisp power delivery meant I was carrying more speeds into the sweeping right hander. In fact, I might be sticking my neck out here, but TVS should have ditched the carb-variant and offered the Apache RTR 200 4V with EFI alone. 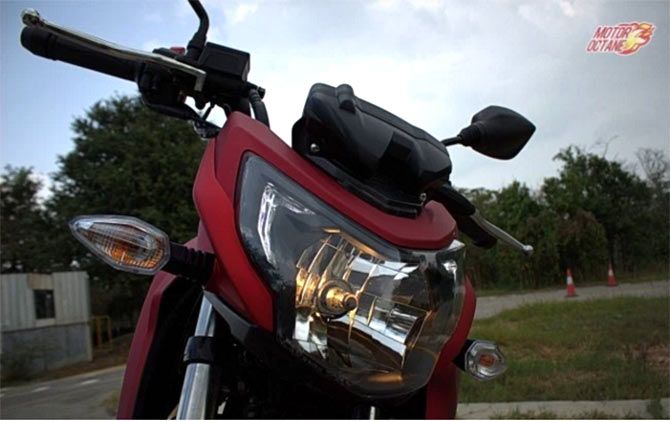 Leaving the track, we were all praises for the engineering team for having come up with such a capable product.

Moreover, the fact that the NS200 isn't available anymore should only improve the new Apache flagship's prospects. And while a proper road-test should allow us to push the envelope further, helping peel away the layers of performance and riding ability in the real world -- the truth is that The Apache RTR 200 4V handles the flagship crown with aplomb! 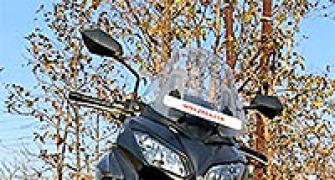 At Rs 7.5 lakh this Kawasaki is worth every dime 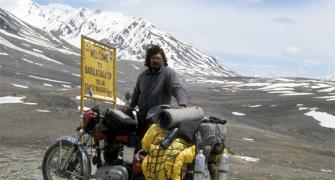 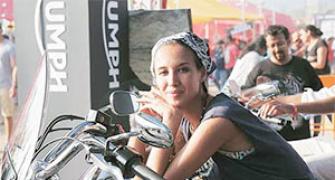 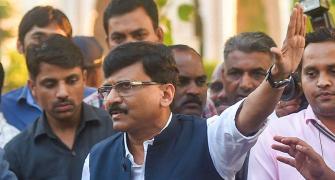 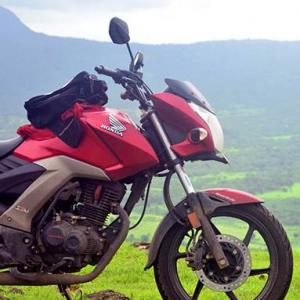 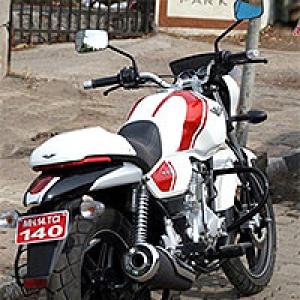