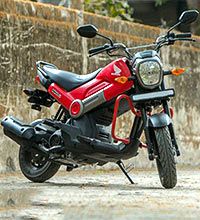 The Honda Navi is quirky in its nature and has a love-it-or-hate-it aura about it, but one thing is for sure that you can't ignore it. It may not be as versatile or convenient as a scooter but the Navi is one of those two-wheelers that you would buy from your heart and not your mind. And not much reasoning is required for buying something like the Navi, no? 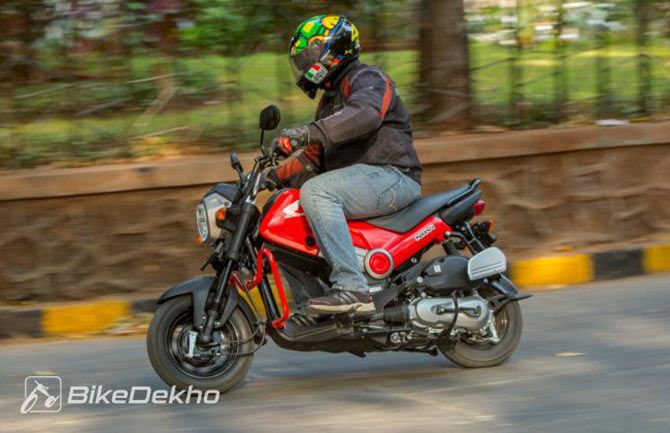 The Honda Navi is a hybrid of a scooter and a motorcycle in a miniature package, and has had everyone curious with its cute looks. But is it as interesting to ride as it looks?

Japanese two-wheeler major Honda may be one of the biggest names in the country when it comes to scooters and motorcycles, but has always had a very conservative approach. The brand has always treaded cautiously in the Indian market, offering precisely what the mass market wants, in the form of a functional, neatly packaged product. Be it the Activa, its Dream series of motorcycles or the Unicorn, Honda's offerings in the Indian two-wheeler market have done well and helped it become a household name, despite lacking the flair some of its competitors have. 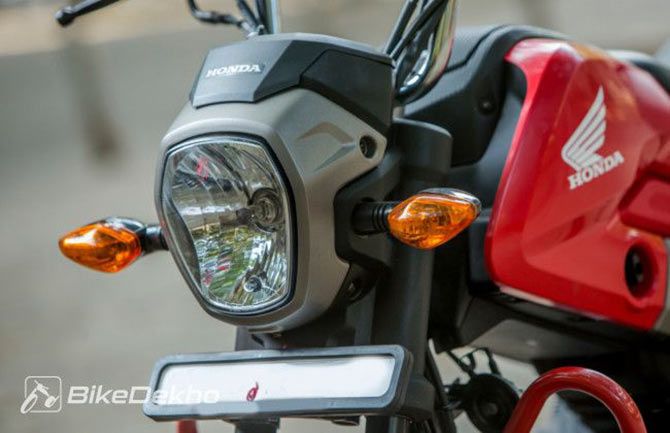 Having established its identity in India, Honda now finally seems to be paying heed to the needs of enthusiasts too. Its recent products boast a design-flair unlike their predecessors, and are more interesting to ride as well. But Honda indeed sprung a surprise on one and all with the Navi at its pavilion at the 2016 Auto Expo. 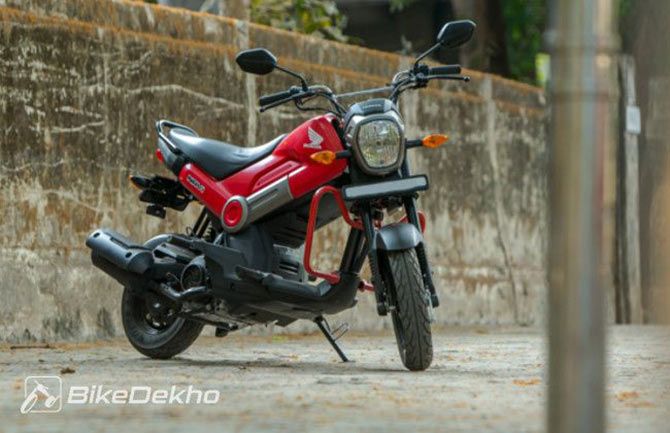 Given its conservative image not many expected Honda to launch something as quirky and interesting as the Navi. A mix between an automatic scooter and a small motorcycle (what are also referred to as 'monkey bikes'), the Navi had almost everyone smile the moment they set their eyes on it. And why not -- it looks cute with its well-proportioned yet tiny dimensions! 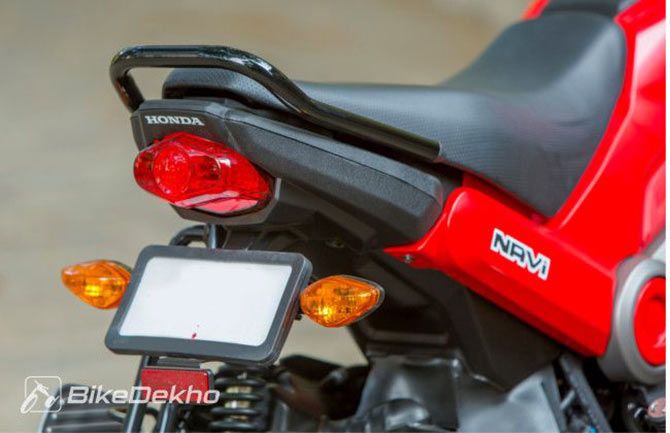 The Japanese two-wheeler giant has certainly shattered all the stereotyping associated with its products by launching something as unique as the Navi.

Needless to say, we've been getting restless to ride this one -- usually its performance motorcycles that have us fight over who'll do test a new bike, but the Navi with its unique design and quirkiness had us squabble like school kids in office! So here's an exclusive ride story for you, telling all you've been wanting to know about the little Honda! 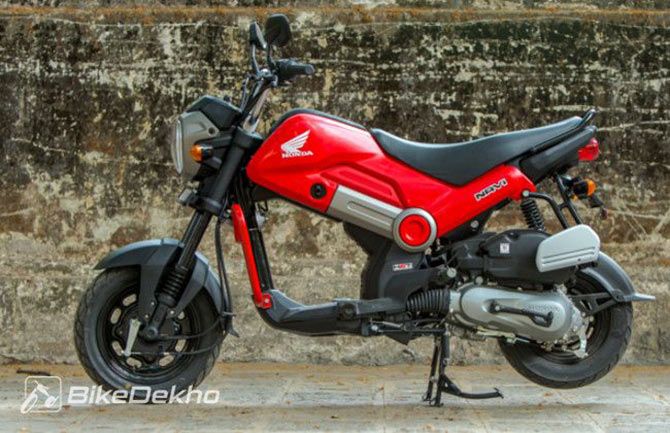 In terms of design, the Navi is unlike any other two-wheeler sold in the country. It is what can be called a mini-bike, and its scaled down design is best appreciated in the flesh. The chunky hexagonal headlamp looks good and the chiselled fuel tank adds a dash of aggression, while the hollow space where the engine usually sits on a motorcycle left onlookers confused.

The tail lamp comes from the now defunct CB Stunner but we would have liked to see a petite LED unit instead. 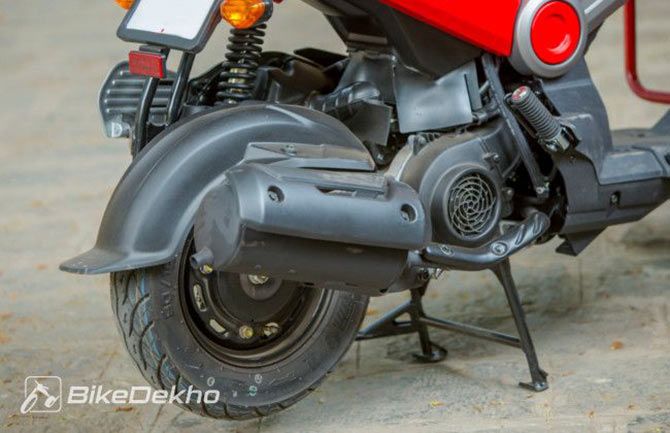 Large, 12-inch wheels gel well with the overall dimensions of the Navi but a set of alloy wheels would have upped the visual appeal. On the whole the Navi draws inspiration from the Grom for its design, a 125cc mini bike Honda sells abroad. 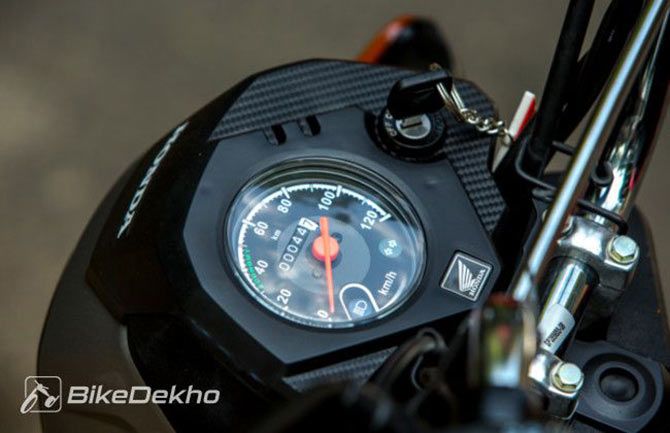 The instrument cluster only gets a simple, easy to read speedometer, odometer and tell-tale lights. There's no fuel gauge but the Navi does get a reserve fuel knob.

The handlebar has been finished in chrome and would have looked better with a satin finish, while switch gear comes from Honda's Dream series of commuter bikes. Quality of plastics is average while the choke knob has been positioned below the horn, and we must point out that the pass switch has been given a miss which is surprising. 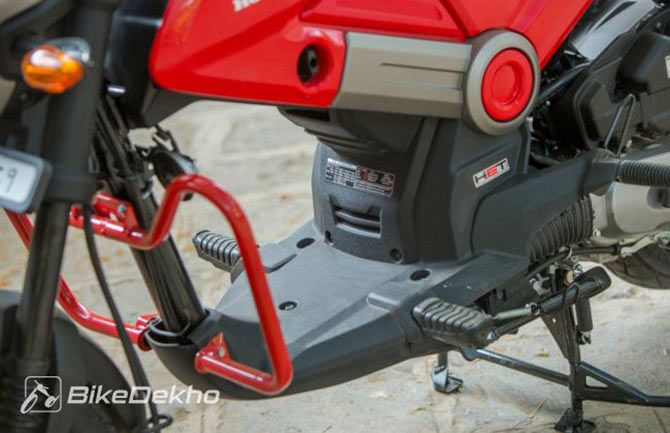 A lot of accessories are expected to be offered to help customise the Navi, including a storage box below the fuel tank which should help carrying knick-knacks. The space below the fuel tank cannot be used to carry bags on the stock Navi though as it does not get hooks like conventional scooters.

Overall styling is quirky but seems to have hit the right note among the youngsters who are its target audience. In fact, the inquisitive looks the Navi drew reminded us of the attention Jim Morrison would have received from teenage girls at his concerts! 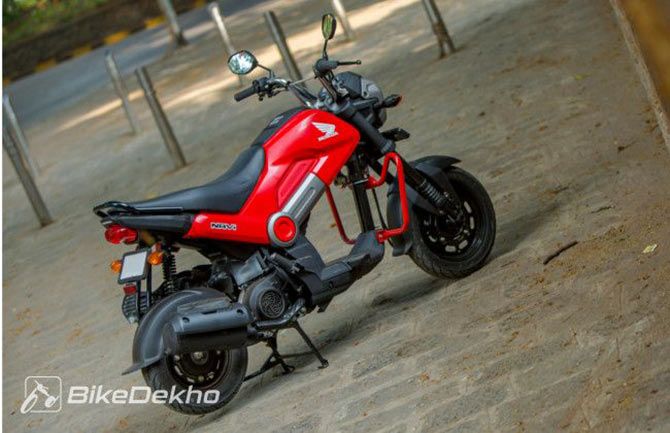 Powering the Honda Navi is Honda's renowned 110cc, air-cooled single-cylinder motor as seen on the Activa. The engine produces 8PS and 9Nm of torque which is marginally higher than the Activa's. Open the throttle and the Navi picks up momentum with enthusiasm and has a peppy feel, just like the Activa.

The sweet spot for the scooter is between 50kmph and 60kmph which are also the ideal cruising speeds in most cities. This very engine is in fact the benchmark for refinement in its segment, and it is only at the peak of its power band that you feel some vibration. A strong bottom end punch on the Navi means overtaking in traffic is effortless, but the CVT transmission can feel a bit jerky at times. The Navi's riding position is sure to surprise riders though. If you were to blindfold someone and make him sit on the Navi, he would feel as if he is sitting on a normal commuter motorcycle and not a mini bike. The raised handlebars and centre-set pegs result in an upright and comfortable riding posture and the fuel tank is easy to hold with the thighs. Shorter riders will find the Navi tall even though its saddle height is similar to the Activa's. The reason for this is the Navi's wide seat, unlike the narrow contoured seat on the Activa.

With the riding position similar to a commuter, I found myself trying to slot the Navi into 'neutral' on several occasions, only to realise this is an automatic! Despite its puny dimensions, the Navi offers decent space for a pillion, though while crawling through traffic I found that the pillion foot rest sits very close to the rider's foot peg, causing the pillion's shoes to brush against my legs each time I put my feet down.

In terms of handling, the Navi is impressive, and feels extremely agile, while its small turning radius makes stop-and-go U-turns a breeze. The under bone-type frame sits suspended on telescopic front forks upfront and a monoshock unit at the back. Ride quality is decent and feels better than the Activa's which employs a trailing link suspension at the front. The forks absorb minor bumps and undulations effortlessly but on a stretch of broken road, performance from the suspension is not as good, since jolts are conveyed to the rider's back.

Drum brakes at either end provide adequate stopping power, though CBS should have been offered as an option. And with all its body panels made of plastics, the Navi weighs just 101kg which makes it effortless to ride or park it on the main stand.

It was not possible to test the Navi for fuel efficiency during our test ride, but given our experience with the 110cc HET engine and the 101kg kerb weight one can expect around 50kmpl in the real world. A tank capacity of just 3.8 litres is inadequate though, even for a two-wheeler meant for city riding.

Honda has priced the Navi at Rs 42,824 ex-showroom Mumbai but on-road pricing is Rs 49,500. And that is due to the set of optional accessories that one needs to buy including a number plate, side stand, saree guard etc.

As a product, the Navi is a commendable effort from Honda at breaking away from the convention. With the Navi just being shipped to dealerships across the country it is difficult to comment on the market response, but it sure has a lot of buyers across various segments intrigued with its unique, likeable design. The Navi is a great option for college students and buyers wanting a two-wheeler that's light and nimble enough to be ridden in traffic apart from getting them the eyeballs no scooter possibly can. 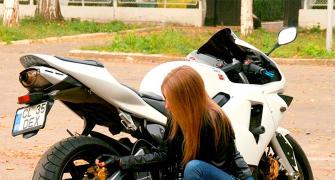 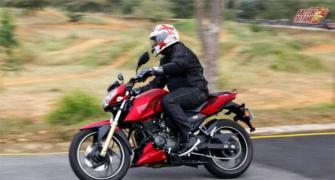 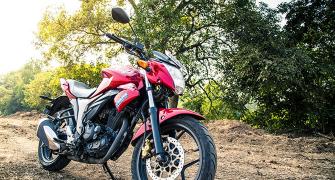 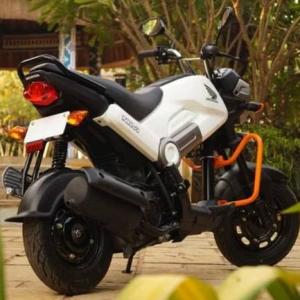