"We believed that technologies could play a role in enhancing the quality of people's lives. We wanted to bring in technologies that will help millions and millions of people. The goal is to give access to useful technologies to everyone and everywhere."

"We are not doing charity; we are not running any NGO. We are doing business in India but the work we do has social impact; our products improve the lives of rural people. We want every product we sell to impact the rural households." They were just two very studious young Americans: they were not friends; they did not study in the same university; didn't even know each other, but were connected by a professor at the Massachusetts Institute of Technology who knew they had similar interests.

After a half an hour lunch, they spent another three hours brainstorming on how to start a company that would create essential technologies. In fact, they even decided on the logo of the company they were going to start in the same meeting.

Soon, they became the co-founders of Essmart Global, a company that right now, works with and for rural south India. Meet Diana Jue and Jackie Stenson, both 28 years old.

After three years in India, Diana and Jackie consider India as their home though they missed home in the beginning. In fact, Diana's fiance is an Indian, and considers Bangalore as her home.

Diana talks about the amazing Essmart story to Shobha Warrier/Rediff.com

Though both Jackie and I were in Boston, we studied in different universities; I was at MIT and Jackie, at Harvard. I had decided to study engineering as a teenager in high school when I saw one of my advisors building a solar water filter. That got me interested in easy technology for community development.

Jackie also used to frequent the D-Lab although she was a Mechanical Engineer but we never met at the lab. Jackie went to sub-Saharan Africa for her project while I went to China and India. I was at IIT-Madras on my research project of testing technologies in the Indian villages.

That was when a professor who knew both Jackie and me, connected us. In our first meeting itself, we decided on what we should do and a rough business plan also was ready over our lunch meeting.

Our business plan won $7000 from MIT to run a pilot. Prashanth, who was Jackie's classmate in the University of Cambridge, joined us and we floated Essmart Global.

Visiting India for the first time I came to India in January 2012 for our pilot project and we chose Pollachi in (Coimbatore district) Tamil Nadu. That was because Prashanth's family hailed from that area. Also, I had the experience of doing my research project in south India.

The pilot was to understand the needs and the willingness of the malligai stores (Kirana stores) to buy essential technologies. When I say 'essential technologies', I mean solar lanterns, water filters, cooking stove, agricultural tools, etc.; anything that will make the life of a person living in a rural area, easy.

We spoke to around 200 such stores as a part of our survey. We believe that these stores have a strong relationship with the villagers and they could be our channel to sell these technologies. We tried to understand from them what the villagers would like to see in our catalogue. We also did a similar survey in Ujire, a village near Mangalore.

Through our products, we want to make a difference in the lives of rural people but to achieve that they should be in a position to buy our products. If you have any plans to create products for rural areas, you better introduce in the area where people can pay for the products.

We also believe that the first time customers have to be the ones who are aspiring to be middle class and not the poorest. That was why we chose the southern part of India as the area of our work. The educational levels of Tamil Nadu are much more than say, the northern part of India. Also, slightly more wealthy communities welcome technologies first, and it will be a stamp of approval for the poor communities who aspire to be like the wealthier people. From our research, we have found that technologies move from richer, urban areas to the rural areas and not in the other direction.

No technology should be given free

Technologies we have in the US are not designed for the lower income group in the rural areas. In the US, today technology is used in the non-essential purposes. That is why we decided to create Essential Technologies; we believed that technologies could play a role in enhancing the quality of people's lives. We wanted to bring in technologies that will help millions and millions of people. The goal is to give access to useful technologies to everyone and everywhere.

As we were doing our research, we saw that many NGOs were buying technologies like solar lanterns, cook stoves etc. and giving them for free. The truth is, when people get things free, they don't value it and they don't use it too. We have seen cook stoves dumped in some corner. But when you buy things, you use it. That is why we were sure that we would only sell essential technologies and not give anything free.

The first technology we kept in the malligai stores in Pollachi, were solar lamps imported from an American company. We wanted to see how people accepted them. The 12 solar lamps were sold in a month. Of course, even in January, there were huge power cuts there!

After the pilot scheme, I went back to MIT to finish my research.

Winning competitions at MIT and Dell

At MIT, our business plan won the MIT Idea Global Challenge competition and got $10,000 as reward. Then, at the Dell Socio innovation challenge, an international competition for student entrepreneurs, we won another $50,000.

With the money, we decided to start Essmart Global officially in August 2012. Five team members from the Boston area also came down with us initially. I have been here in India ever since and Jackie joined me later. We know how important it is to have local people who know the area, language and residents, to market our products. We have a director from Coimbatore who takes care of the Tamil Nadu operations and five other local guys. Chandru who joined us then as a sales person is now in charge of the Regional distribution centre.

Initially, we started very small; just 10 outlets, 2 sales people, with our presence only in the villages close to Pollachi and 20 products. We were selling just 1 piece at a time. Our products were not big brands but good quality ones, sourced by us in the US but imported by people from India. We buy from the Indian buyers.

When we sold our 100th product after two months or so, it was like crossing a huge benchmark. Today, we sell thousands of our products every month.

We have 43 people working for us with 915 outlets and 6 offices in Tamil Nadu. Now, we are expanding in Karnataka.

When we started, our catalogue had only 4 products but today, we have 65 products.  We began with two solar lanterns priced at Rs 550 and another at Rs 1,600 but today, we have a whole range of products; solar lanterns, solar powered mobile phone chargers, water filters, agricultural products like mobile phone controlled water pump controllers and many other agricultural tools; all aimed at rural people.

We must have sold more than 10,000 products so far, selling an average 500 products a month. We have been growing at least on an average of 20 per cent every month. We are not doing charity; we are not running any NGO. We are doing business in India but the work we do has social impact; our products improve the lives of rural people. We want every product we sell to impact the rural households.

The stores that work with us also make money as we give a commission of around 10-15 per cent.

Many of those who purchased our products first were small businesses who would work longer hours like roadside vendors, hotel owners, sari weavers and barber shops.

I still remember visiting one of our very early customers, a barber, whose little shop was not connected to the electricity grid. One day, when we called out his name, he came out of his house and opened the shop and turned on the solar lantern. Suddenly, a customer turned up and he spoke to us while cutting the customer's hair with the solar lantern on. It was amazing. I could see the impact our product had on the barber's life.

I also remember visiting a sari weaver's house. He was not sure whether he should purchase the Rs 1,600 solar lantern as it was understandably an expensive investment for him. He had had many bad experiences with bad quality Chinese products. As we were leaving, he changed his mind to buy the product. Later, he told us how happy he was of the product and how much the solar lantern changed his life.

We know our business can be replicated anywhere in the world. Many people ask us whether we have plans to expand in other countries. At present, we are happy in this geography though we see a lot of potential in this model to go other places.

We will have our presence first in the entire south India; then the whole of India and after that, we will consider south Asia and South East Asian countries and Africa.

It is a lot of hard work; not easy. Our work involves long hours and many travels but seeing the impact our products have on people and working with the team, is very satisfying. 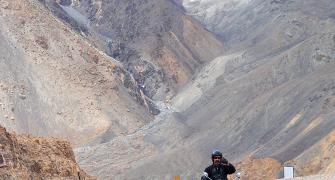 Biking to Ladakh? Mistakes you must avoid! 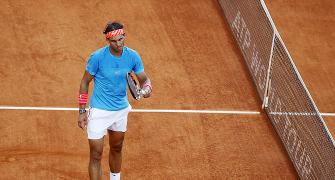 PIX: Nimrat, Mandira come together for a cause