News
Business
Movies
Sports
Cricket
Get Ahead
Money Tips
Shopping
Sign in  |  Create a Rediffmail account
Rediff.com  » Getahead » Marathwada to the UN: How a farmer became an entrepreneur

Godavari Dange dropped out of school when she was in class VII. She was married at 15, widowed at 19.
Over the years, the farmer completed class 10 and today, leads an organisation that helps women, young farmers solve their problems and empowers them to lead a dignified life. 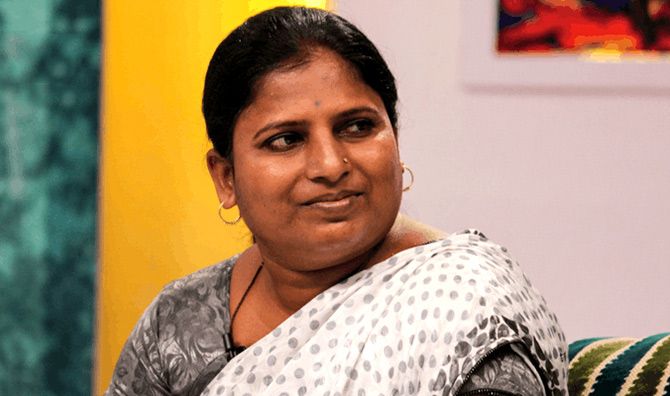 In 2011, when 31-year-old Godavari Dange boarded an aircraft for the first time in her life, there were celebrations in Osmanabad district's Tuljapur taluka in Maharashtra.

Godavari was on her way to New York to represent grassroots women's networks in India at the Commission on the Status of Women (CSW), UN.

Aided by a translator, this farmer-turned-entrepreneur addressed the gathering in Marathi, speaking about the farmer crisis in Marathawada.

Seven years on, Godavari has travelled 14 countries, and held centrestage at most events she has attended.

In a conversation with YourStory at the Unnati Global Forum, Pune, Godavari narrates her story from being widowed at the age of 19 to paving way for many farmers from her own region to begin with. 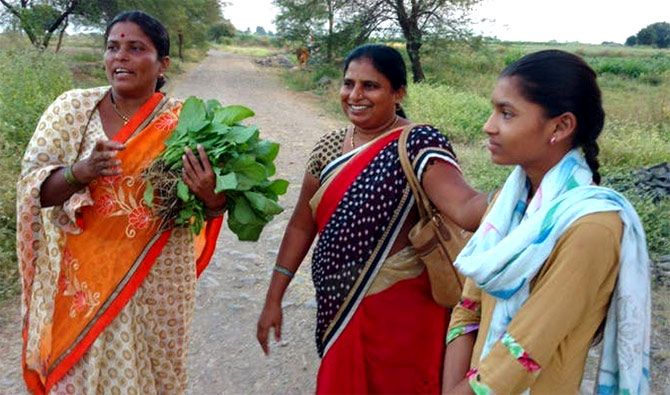 Godavari Dange helps women in her village overcome their fears and find employment.

One of four sisters, Godavari was the eldest and studied only till class VII, as she lacked access to a school in her village.

Married at the age of 15, tragedy struck when she was 19 as her farmer-husband was killed in an accident.

Her parents took over the care of Godavari and her two children.

Hope came in the form of fellow villager Balu, who worked at a self-help group (SHG) and insisted on bringing her to the community.

In 1999, she started participating in women's SHGs, and was soon mobilising other women in SHGs.

She soon found employment with Yashwanthi Sakhi Sanstha, an SHG in Osmanabad district, where she wrote records.

"When I got out of the house, I had difficulty in even stopping a bus. I used to wonder what if the bus does not stop and people would laugh at me. I would worry how I'd travel alone among unknown people, and even start a conversation with them," says Godavari.

Overcoming her own fears, her job gave her many opportunities such as screening applications, and monitoring repayments.

She brought more underprivileged women on board, and helped address their inhibitions of stepping out of their comfort zone.

Godavari was later appointed the federation secretary of Sashakath Sakhi Sanstha, an NGO that worked in empowering rural women with livelihood options.

Over the years, Godavari completed her class X. Even now, she wishes to study further.

She says her constant interaction with women helped her gain insights, and she started working on issues related to health, nutrition, sanitation, and livelihood by motivating women’s networks.

Within a year of joining SSP, Godavari founded the first women’s federation to work on economic and leadership development. The federation has more than 5,000 members at present.

In 2012, when the Marathawada region faced a severe drought, Godavari mobilised more than 1,000 women farmers across 110 villages to collectively grow vegetables and food crops to improve food security.

Most farmers in the region grew sugarcane and soya, which require more water to grow, and deplete the groundwater. Through SSP’s one-acre model, which was about growing more than 25 different types of vegetables in one acre of land, the farmers started earnings some profits.

The organisation, which predominantly focuses on women farmers, introduced them to the model along with techniques of organic farming.

At SSP, Godavari now leads a community innovation fund that seeds innovations and has disbursed more than Rs 1 crore for agriculture, water conservation and women-led enterprises.

Godavari has been awarded the Best Trainer at the district level by the District Rural Development Authority of Osmanabad, and has presented the accomplishments of her federation at several national and global peer-learning exchanges, grassroots academies, and international conferences.

The organisation also offers small loans to women farmers. "Most of the banks do not offer small funds, which is why when we introduced three levels of loan the women of Marathawada had some finances to fall back upon," says Godavari.

"If a woman farmer has to buy hay for her cows, there is no bank which gives a loan for this. If the farmer is landless or has less land, a loan is ruled out. This is where our job becomes important."

In the last 18 years that Godavari has worked with SSP, she has helped over 4,500 farmers receive training in the five districts of Osmanabad with women-dedicated funds.

For a farmer to get a loan from the SSP, she must have an Aadhaar/ration card, and be a part of SHG agri groups.

Details of land and livestock owned are often also sought by members of the Sashktha Saki Sanstha before giving a loan. 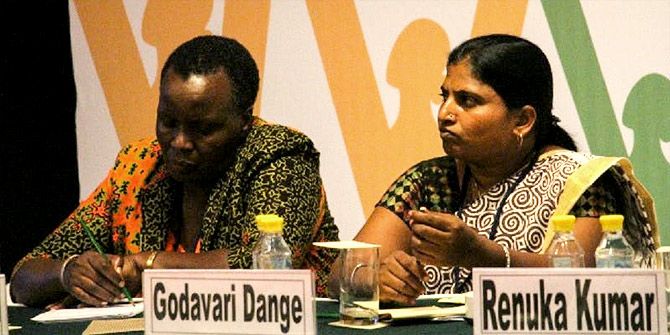 Godavari (right) narrates her own struggles and experiences to inspire women and lead change.

Godavari says that over the last 18 years, the region has started to recognise women farmers.

"In every farming land, despite 80 percent of farmers being women, they were mostly called labourers.

"Most of the lands too were owned by men and helping these women to take charge was a challenge.

"From sowing to harvesting to cleaning the yield, women were everywhere, but they took a backseat when it came to deciding the price, hiring labour, the finances and taking the produce to the market.

"There are 55 farm produce companies in the country, but there is none that is dedicated for women, which is why our role becomes more crucial," Godavari says.

The three-year-old organisation is home to 250 farmers and has 10 directors. As a panelist, Godavari (centre) speaks about how to find opportunities and resources and use them to solve problems.

Teased as being a globetrotter, Godavari has travelled 14 countries, including Kenya, the Philippines, Italy, Nepal, the US, Turkestan, Brazil, Switzerland, Malaysia, Sendai, Turkey and Indonesia.

In 2011, she spoke at the CSWat the UN. Godavari has also participated in Rio+20 to showcase the critical role of grassroots women in sustainable development and was a panelist at the United Nations International Strategy for Disaster Reduction (UNISDR) to present the initiative of women in drought situations at Geneva.

Recently, she became the global ambassador in the UN for the International Fund for Agricultural Development (IFAD) and Huairou Commission on Rural Women in Sustainable Agriculture -- a global initiative across 20 countries.

"The policies and opportunities farmers are often made at an organisational level and, so, reaching out to grassroots beneficiaries, considering their worries, loopholes and bringing farming experts on board is the need of the hour. Also, making way for the presence of women at important positions enables them to join the cause, be it empowering each other, or a crucial sector like farming," Dange says.

Godavari was recently awarded the Rama Govinda National Award for her exceptional work in the field of climate community resilience and, today, is the face of women farmers of the Marathwada region. 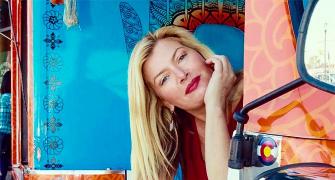 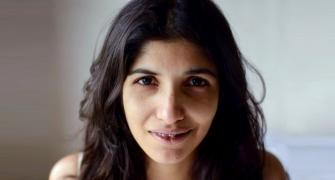 She is changing the way Indians read 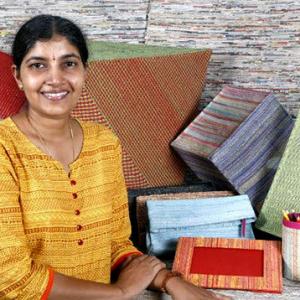