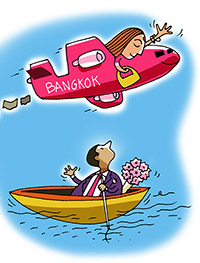 'My wife and I have wiped out our savings booking tickets to places we've been invited for the nuptials of everyone from friends' children to those of acquaintances,' says Kishore Singh;
Illustration by Dominic Xavier/Rediff.com 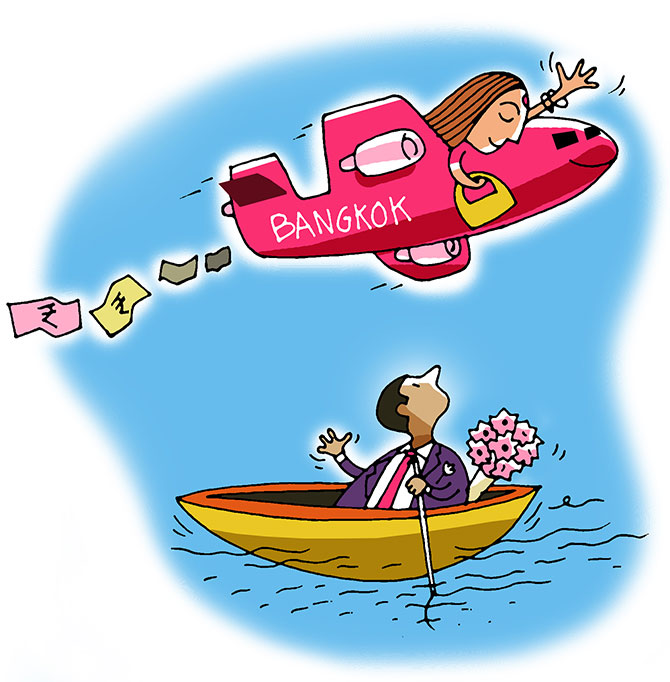 Everyone knows that weddings are expensive business, and these days the pinch is being acutely felt.

While parents argue with the caterer about dropping the prawns from the eighth consecutive function's starters -- and they have everyone's sympathy in these straitened times -- no one is giving a thought to the guests who have to make do with less than the cloying excess to which they have become accustomed.

Imagine having to pay a visit to your gentleman's gentleman -- no, not the butler, but the genius master-cutter who measures you for bundgullas and achkans -- to say, sorry, cancel the lilac suit and the paisley pyjamas, there's no loose change in the kitty, and my wife says I can't sign any more IOUs.

Time was when weddings took place in neighbourhood parks, or cul-de-sacs, for which roads were blocked, families and friends turned up to help, everything from furniture to carpets, cooking utensils and cases of whisky were borrowed.

No one minded the exchanged clothes and shoes, though sometimes distant aunts were caught helping themselves to jewellery that wasn't theirs.

Now, of course, a wedding in the same city is simply gauche.

My wife and I have wiped out our savings booking tickets to places we've been invited for the nuptials of everyone from friends' children to those of acquaintances.

If Gautami's brat is getting hitched in Srinagar, the Bhasins are doing it in Goa, and given the undue emphasis on astrology and auspicious dates, damn if it doesn't mean crisscrossing from the bachelor party of one (to which parents and extended families are, naturally, invited) to the pheras of another, in one case even being asked along on the honeymoon because "everything's so much fun together".

Did I mention Bangkok?

We're required there for the Batra wedding, only the Kapoor's daughter's engagement in Bali is clashing with it, so my wife and I have decided to split our affections, though I suspect my wife has opted for Bangkok for the shopping, while I've been volunteered for a marriage in our village to keep me "out of mischief".

There are family weddings in "b-o-r-i-n-g" Jaipur too, and, really, after five back-to-back functions in Udaipur, how much fun can it be?

Preeti did mention that she would sign up a health spa for her daughter's engagement party, but presumably it frowns on excesses at a fat farm, so it was called off in favour of a boat ride in Banaras. My wife has regretted the invitation.

As for the Nathani nuptials in Florence, it means queueing up for a Schengen visa.

It also means the kids want to hitch along, even though they haven't been invited, and where's the point of going so far for just a couple of days?

So we plan on being in Greece, the son wants to holiday in Poland, our daughter's preferred plans include France, and their mother says it's been six months since she was in London, she's having withdrawal pangs, she'll die if she doesn't report to Harrods at Knightsbridge.

There are a couple of weddings in Delhi too, but my wife wants to give these a miss.

"People will think we turn up wherever we're invited," she explained to me. "I told your friend Janki we can't come to these farmhouse-sharmhouse wali parties, but if she changes her mind and shifts the venue to Seychelles, or the Maldives, of course we'll go. After all, support counts for something, doesn't it?" 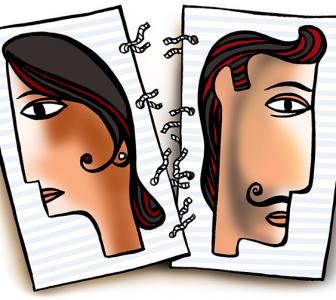 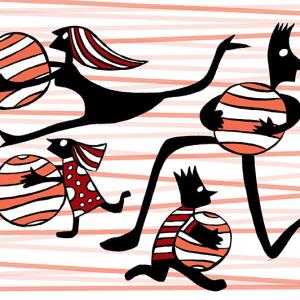