News
Business
Movies
Sports
Cricket
Get Ahead
Money Tips
Shopping
Sign in  |  Create a Rediffmail account
Rediff.com  » Getahead » In the name of the father

Fathers and sons have had a vexed relationship throughout myth, says Arundhuti Dasgupta.
Illustration: Uttam Ghosh/Rediff.com 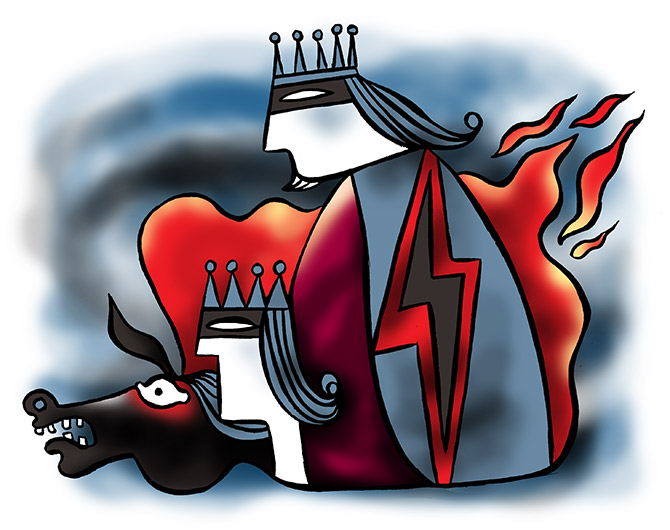 Donald Trump has said his son is innocent as has Lalu Prasad about Tejashwi.

While one has dallied dangerously with one of America's sworn enemies to help his father, another has been accused of aiding and abetting in the misdeeds of his parent.

Both fathers have come out swinging vigorously in favour of their sons, as did Dhritarashtra for Duryodhana in the Mahabharata, ignoring and dismissing those who warned him about his son.

Duryodhana gave his father ample reason for worry but every time Dhritarashtra was asked to intervene by his advisors and courtiers, he was held back by his love and his desire to see his son crowned king.

Vidura, Dhritarashtra's closest aide and step brother, placed the blame for the epic war squarely on the father's shoulders on several occasions.

Fathers and sons have had a vexed relationship throughout myth.

Some fathers, unable to say no to their sons, have given in to their most ludicrous desires.

As Greek sun god Helios did with Phaeton.

Young brash and entitled like many modern day scions in the world of business and politics, Phaeton pleaded with his father to let him ride the god's four-horse chariot.

Helios was reluctant but unable to deny his wish. He retired for a day, leaving the reins of his chariot to Phaeton.

But Phaeton was too weak to control the horses and according to one version, the horses led him astray. They dragged the chariot close to heaven, burning up parts of it and creating what we know today as the Milky Way.

They scorched large portions of the earth, bringing down death and destruction upon the people.

Finally Zeus had to crash the chariot and kill the young boy with his thunderbolt.

Helios's weakness hastened his son's ruin just as Dhritarashtra's did for Duryodhana.

The relationship between sons and fathers, as portrayed in myth, has changed over time.

Sons started out as antagonists, turned into wary associates and then the most desired progeny and heir to the throne.

In Greek mythology, Cronus swallows all his children until he is killed by his son Zeus.

In India, Shiva starts off killing his son Ganesh, but is forced to bring him back to life when his wife, Parvati, so demands.

To begin with, the gods were wary of sons taking over their place.

Both Zeus and Poseidon were in love with Thetis, but backed off when they heard the prophecy that her son would be greater than the father.

Finally Peleus (a mortal king) married her and fathered Achilles.

In the Mahabharata, we have various accounts of obedient sons: There is Yayati's son Puru, the progenitor of the clan of Kurus.

Puru gave up his youth so that his father, Yayati, could extend his.

And there are challenger sons.

Nachiketa argued with his father for reneging on his word to the gods. The father sacrificed him to the god of death (and regretted it immediately, unlike old gods who wanted to see their sons dead).

This gave rise to the well-known dialogue between Yama, the god of death, and young boy Nachiket (Kathopanishad).

In later mythology, sons soon turned into favoured children and then a must-have.

In Hesiod's Works and Days, the gods reward righteous people with peace, good crops and a blessing that their wives give birth to sons who resemble their fathers.

The Ramayana prescribes the Putra Kameshti yagna (a ritual performed to gain sons) that is conducted in many households and temples even today.

In the Mahabharata, the sage Jaratkaru's ancestors are condemned to hell because he has not borne sons.

They are all rescued when he marries the serpent king's sister and bears a son called Astika.

The Mahabharata abounds with stories about fathers and sons and while they may not all be ruinous relationships, they are tied up in complex knots.

Bhima sacrifices his son Ghatotkacha to save Arjuna.

Drona gives up the fight when he hears his son is dead and Karna's father (the sun god) can do little as he watches Indra (the rain god) take away his armour.

Even Krishna's relationship with his son Pradyumna is complicated.

Pradyumna was Krishna and Rukmini's son but he never fought the Mahabharata war (engineered and guided by his father).

He set out on a pilgrimage with his uncle Balarama to stay away from battle and died in an intoxicated brawl that broke out after the war and brought the end of the Yadu clan.

While the myths speak of a time long gone, many of the knots that defined the father-son relationship continue to tug at the inheritors of these stories.