'I've lost count of the number of times I've said no to sex, because I am tired, and how it has led to air punches, banging of doors, muffled expletives by the other half.'
'With time, we've learned to talk it out and have an arrangement that I'd like to believe works for both of us,' notes Radha Yadav, our newest columnist. 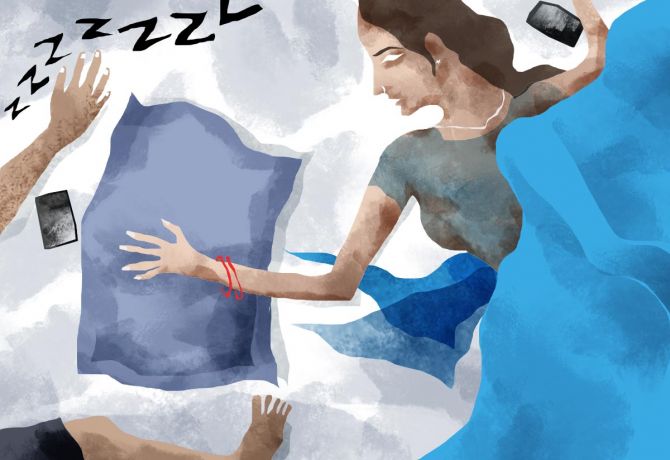 A few weeks ago, a female friend shared a social media thread about women in loveless, sexless, marriages talking about how it was so common in India for women to be unhappy in bed.

The only girls group -- in which we would talk about everything from menstrual cups to stupid couple challenges like walking into a room naked and shooting your partner's reaction -- surprisingly went silent for the next few hours.

The provocative post didn't even feel worthy enough of a 'hmm' or a comforting 'thumbs up/down'. I wondered why.

I read the post too late to comment or start a conversation. But I also realised that maybe none of us wanted to admit how true it was and loathe in self-pity over something that is increasingly obvious in a marriage.

I know friends who think it is normal if the last time they had sex was months ago. Because if you are in a long distance relationship or have a large family with no privacy, good sex is the least of your concerns.

But also, very unlike in olden times. Like my grandmother's best defence for bringing up seven children into the world, "Those days, whether you liked it or not, it was the best way to kill time. But we were also okay without it (sex). Also, we didn't have the luxury of things available today (Making a suggestive gesture about condoms or protection)."

Quite frankly, it's a topic worthy of a discussion that I would instantly jump into.

Some people, including my friends think that if you've had a love marriage, you are guaranteed good sex.

But eventually, I believe, most marriages -- love or arranged -- end up from being platonic to pretentious or make-believe happy.

Even if you know your partner's needs and desires, over time, you tend to get too comfortable, maybe even bored and eventually tired of each other.

This sexual decline, while as natural as it may sound, could also occasionally make you feel less important, deserving, like in the case of some of my friends.

Not that I endorse infidelity or suggest that you seek spice outside of marriage, because that is entirely up to what truly makes you comfortable. But good sex, I've reason to believe, is very essential for a healthy marriage.

Personally, I've lost count of the number of times I've said no to sex, because I am tired, don't feel the need or energy in the middle of the night or untimely wee hours of morning and how it has led to air punches, banging of doors, muffled expletives by the other half.

Earlier, I'd protest, sometimes argue and seek an explanation for not wanting to feel guilty for having denied something so basic to the man I am married to. But with time, we've learned to talk it out and have an arrangement that I'd like to believe works for both of us.

Frankly, most women ignore or give in to this demand without realising how damaging it is to their own happiness.

Women, I hate to break this to you.

You may be a masterchef in the kitchen, an amazing daughter-in-law and wife who perfectly balances work and family without complaining and may even have the perfect body to boast of. But if you are not happy about your sex life, there is an unexplored vacuum that will gradually creep into your super perfect relationship.

I know friends who have dated partners and called it off because the sex was awful, but never admitted it to the other person because they didn't want to hurt them.

I may be wrong, but wouldn't it help if you were just honest about it?

Any sort of constructive criticism here should be helpful for either sex.

But turns out, it's not easy to talk about not wanting sex, or wanting good sex, from your partner.

"When you are dating you get to know from the first kiss, how it (sex) will turn out to be. It's easier to flag and move on. But how many Indian women will dump their husbands because of bad sex and vice versa?" observes a friend who firmly believes that good sex is crucial to keep both partners happy.

In reality though, just like women who choose not to comment about sexless marriages, men are tight lipped about being unhappy in sex too. The reason, in the words of a male friend, "I can't tell her I am not (happy). It's not worth the argument it will lead to."

After his short list of complaints, when I asked him if he'd ever bothered to ask what his wife really wants, he simply smiled, slyly accepting there could be an alternative version to his theory.

By no means, I intend to brag about being an expert at marriage, because, there is no perfect recipe to a happy, content relationship. But I often end up talking to friends and cousins and I would like to share some of my learnings.

While we all talk about trust, financial independence, family support, division of duties, intimacy or rather, the lack of it in a relationship, is often ignored.

Men obviously don't talk about it because even after spending decades sleeping with the same partner it may be hard to tell if you've truly satisfied her.

Heck, how many men even care to ask or talk about it? And how many women will care to actually tell you the truth?

Forget feedback after sex, men and women don't even care about foreplay before sex. Mostly, both parties just want to get over it like it's another chore.

As for all those relationship experts telling you how to spice it up with candles and berries, remember, there are people living in cramped one room apartments with kids, parents, relatives, sometimes not even sharing the same bed for a lack of space.

These are people for whom sex is still a luxury, good or not, doesn't even count.

A cousin once told me her partner suggested they try for a second baby simply because that would mean he would be "allowed to have intercourse every day" as part of their exercise.

The fact, he mentioned "allowed" is important because you see, even among modern couples, the idea and understanding of sex is flawed.

Of course, it seemed like a nightmare for my cousin to go through the whole maternity process and complementary sex simply for wanting another natural birth.

Although I still tease her about it, she maintains it wasn't such an enjoyable experience for her.

To me, it's still okay, if you can talk or joke about being unhappy in your sex life. As long as you express your displeasure in some way, it will at least help keep the conversation going that you are not alone. 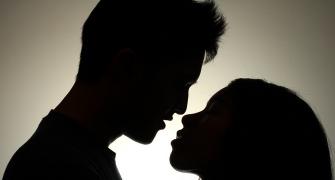 5 simple tips to spice up your intimacy 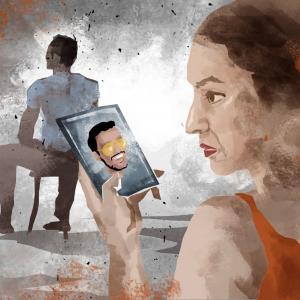 The Circle of Love 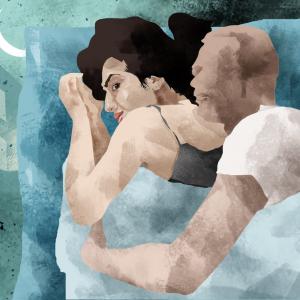