Stay Hungry, Stay Foolish is the story of 25 IIM Ahmedabad [Images] [Images] [Images] graduates who chose the rough road of entrepreneurship. They are diverse in age, in outlook and the industries they made a mark in. But they have one thing in common: they believed in the power of their dreams. This book seeks to inspire young B-school graduates to look beyond placements and salaries. To believe in their dreams.

The book is authored by Rashmi Bansal, who is an entrepreneur and IIMA alumna herself. Rashmi is co-founder of JAM (Just Another Magazine) and writes extensively on youth, careers and entrepreneurship.

Presented below is the fifth excerpt from the book:

THE ART OF GIVING 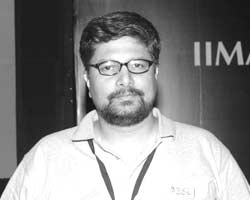 He's worked with a newspaper, a television channel and as principal of a school. Venkat then launched GiveIndia, to promote the culture of 'giving' in India. He is an entrepreneur but his mission is one with a difference.

Had Venkat Krishnan got admission in a convent school in class 5, he may have been your regular investment banker type today.

But six years spent at 'Airport High School', where a large number of students came from slums and chawls, changed Venkat's life. It made him who he is.

"From class six or seven, I started feeling extremely strongly about inequity in society. I could see that there was a guy in my class whose father works in Dubai. So the family is well off, they have a two bedroom house. They would eat biscuits for breakfast which is a luxury."

"And there is another guy in the same class who lives in a slum in Kajuwadi and his father is a garage mechanic. And they would always buy dus paise ka shakkar aur pacchis paise ka tel, that too when a guest comes to their house."

And to Venkat that seemed fundamentally wrong.

In a country where most of us are conditioned to simply 'look the other way' that makes Venkat a seriously different kind of guy. And that difference reflects in every choice in life he's made.

We are meeting in the lobby of a suburban hotel. Venkat lives somewhere close by but hesitates to call me home. "The house is too small," he mumbles. Not that he really cares what I, or anyone else, think of his life, or lifestyle.

Venkat's nickname on campus was 'Fraud' which is ironic because both in the honesty with which he speaks to me, and the actual work he does, Venkat is one of the most genuine people I have ever met.

And genuine people are always an inspiration.

The idea of becoming a sales rep running around selling pharmaceuticals did not appeal. So more as a 'de-risking' thing, Venkat took the CAT exam.

"I managed to get section A of IMS coaching material from one of my seniors, free of cost. I studied from that. My CAT entrance was terrible. At IES school in Dadar, I was put in a KG class where the benches were so small that I had to sit with my legs outside for the whole two hours."

"Calls came from all four IIMs. At the IIM Ahmedabad interview, Prof GS Gupta was on my interview panel. In those days, on Doordarshan, in weather forecasts, they used to give decimal temperatures of all cities.

Gupta asked, "You are a stats grad. Tell me, what is the probability that all eight decimals will be different. A guesstimate."

He said, "I am delighted. You are through because this is the first time anybody has given the correct answer to this question."

Venkat had also taken the Indian Statistical Institute (ISI) entrance test. On 3rd July, 1991, when he was on the IIM campus, the MStats admission letter came.

"I think that was the toughest decision I went through in my life. From six in the evening till three in the morning I was agonizing over what to do. My passion was to do statistics, I wanted to go to Calcutta. But somehow the idea that the MBA degree gives you much more access to more opportunities, financially you will be much more well off, that in turn is empowering."

Finally, he opted to stay at IIMA.

"First 1.5 months, I was very scared because everybody is a Stephen's topper and IIT this and IIT that. I did extremely well. My first mid terms GPA was 3.7 or something like that. Then I stopped studying."

"I am not interested in doing well academically." So what was he doing?

"I was sleeping. You can ask anybody in my dorm."

And thus, Venkat was nicknamed 'Fraud'. People used to believe that after everyone slept, he must have been switching on his table lamp and studying. Because he did so well, getting As in tough quant courses without 'any apparent effort'.

As usual, Venkat did find ways to use his time constructively. Learning to play the keyboard; reading in the library, whenever he had free time. Much of it on the subject of higher education. The system of memorising dates and formulas, he strongly believed, was killing human potential. If you let young people fall in love with a subject, imagine what they can do to a build a better world!

Clearly, Venkat was not headed for a mainstream corporate career. The idea was how to leverage this degree to make a difference. IAS was one possibility. A summer job with Khadi Village Industries followed. The project was to develop a model to market khadi without rebate.

Soon enough he realised a similar project had been done by IIMA's Prof Vora and it was gathering dust in their library. What's more, working with the CEO of KVIC, an IAS officer, made Venkat realise how weak the bureaucracy was in terms of decision making. He realised that IAS was not his cup of tea.

Then, LEM happened. Venkat had opted for the entrepreneurship package -- courses like New Venture Management, PPID (Project Planning Implementation and Development) and LEM (Laboratory in Entrepreneurial Motivation). Plus, he did two IPs (Independent Projects) on entrepreneurship.

By this time he was quite confident about wanting to become an entrepreneur, at some stage in life. But it was also clear that even if he became an entrepreneur, it would not be something like IT, but about 'making a difference'.

'In busines you have to hope, persevere'

This IIM grad opted to be his own boss

'With entrepreneurship you can't afford a big ego'

Stay Hungry Stay Foolish is published by CIIE (Centre for Innovation, Incubation and Entrepreneurship), IIM Ahmedabad and available at all leading bookstores across India for Rs 125. Website: www.stayhungrybook.com