0 Number of times Ravichandran Ashwin has dismissed Virat Kohli in a Twenty20 match.

3 Number of wickets taken by Royal Challengers Bangalore bowlers in the powerplay overs in this edition -- the fewest by any side.

6 The number of most consecutive matches that a side has lost at the start of an IPL season.

Before Royal Challengers Bangalore in this edition, only Delhi Daredevils had lost first six matches (in 2013).

Another defeat tonight and Royal Challengers Bangalore will hold this dubious distinction on their own.

7 Number of consecutive matches won by Kings XI Punjab at Mohali -- their longest winning streak at any ground.

8.54 Kings XI Punjab's economy in Powerplay overs in IPL 2019 -- the worst for any team in this edition.

91.75 The difference in A B de Villiers's batting average while facing pacers and spinners in this edition. 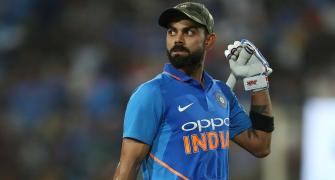