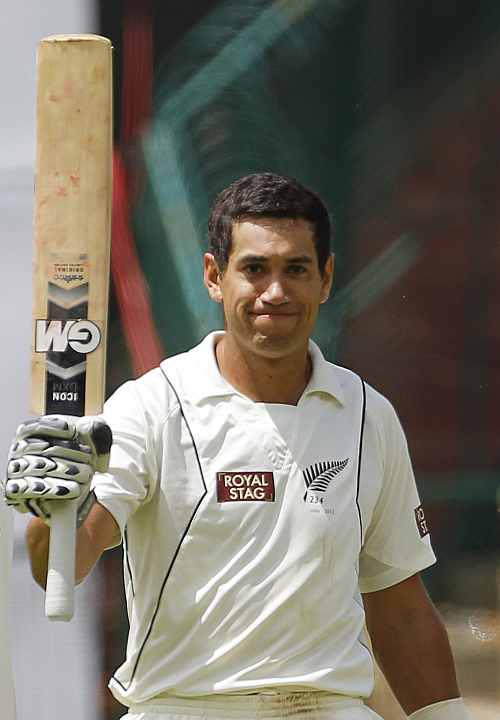 New Zealand captain Ross Taylor kept his promise of attacking India's spinners by smashing an entertaining hundred as the visitors reached 328 for six at the close of the first day of the second and final Test in Bangalore on Friday.

Kruger van Wyk (63 not out) and Doug Bracewell (30 not out) carried on the good work after Taylor's dismissal, adding an unbeaten 82 runs for sixth wicket before bad light ended play 35 minutes early.

The 28-year-old Taylor had promised a positive approach at the Chinnaswamy Stadium after New Zealand lost 18 wickets to the Indian spinners in the first Test in Hyderabad, which the hosts won by an innings and 115 runs to go 1-0 up in the two-Test series.

Kiwis off to a horrendous start 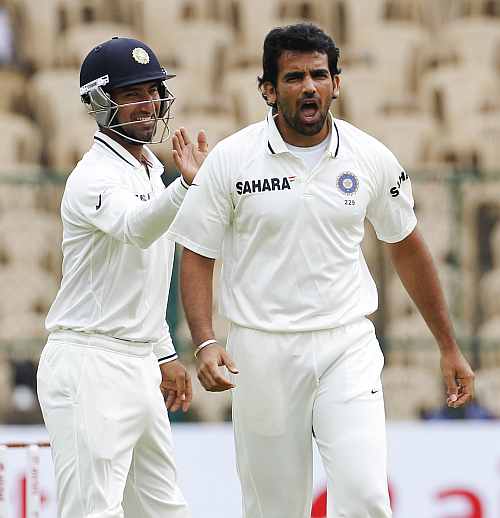 New Zealand were off to a poor start, losing Brendon McCullum in the second over with the visitors yet to open their account.

While Guptill seemed to be in all sorts of trouble negotiating the Indian attack, which extracted some bounce in the first hour, Williamson played with confidence.

Guptill got a reprieve on 17 when Virat Kohli in the third slip failed to latch on to an outer edge off Zaheer's bowling. He got lucky once again when he edged the ball that flew right of the diving Virender Sehwag in slips. After New Zealand crossed 50, Guptill belted three boundaries in an over of Yadav and soon reached his half-century, carving one to third man fence. He faced 62 balls to get to fifty with eight hits to the fence.

Williamson, meanwhile, failed to sustain and got trapped Leg-Before-Wicket by Ojha, who had him for the third time in three innings on this tour. Williamson scored 17 runs off 44 balls with the help of two boundaries.

Guptill tried to attack the spinners but ended up giving a simple catch to Gautam Gambhir at midwicket off Ojha. He departed for a brisk 79-ball 53. 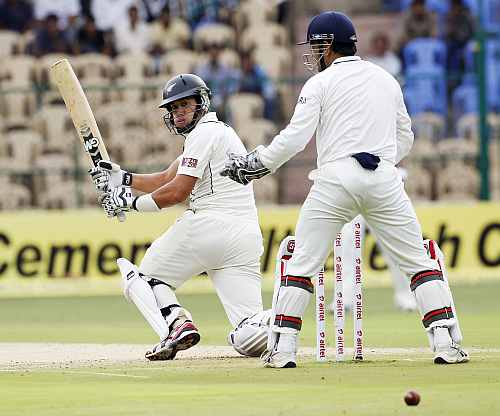 Image: Ross Taylor plays a sweep shot during the first day of the second Test in Bangalore
Photographs: Vivek Prakash/Reuters

Taylor was especially severe on Ashwin and Ojha, and to some extent Zaheer, clobbering them all over the park.

In an over, the Kiwi skipper belted four boundaries in Ojha's over and raced to his 17th Test half century which came off 46 balls. 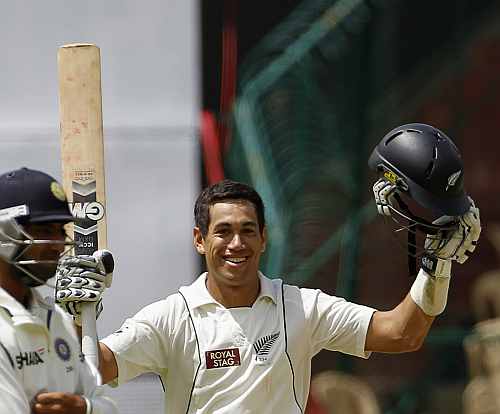 Taylor hit 16 boundaries and two sixes and attacked the bowlers from the onset to complete his seventh Test century, and his third against India, off just 99 balls.

He slog-swept the spinners effectively, played the cut shot fiercely and added 107 runs with Daniel Flynn (33) for the fourth wicket at a breathtaking scoring rate.

Taylor and Flynn combined to add 72 runs off the first 10 overs after lunch before Flynn fell leg before to off-spinner Ravichandran Ashwin while attempting another sweep shot.

Pragyan Ojha kept India in the hunt by picking up his fourth wicket shortly after the tea break when Taylor was also out leg before also trying to sweep the left-arm spinner.

After Flynn's departure, pacer Umesh Yadav and Ashwin tightened the screws and dried the run flow as James Franklin too perished cheaply. 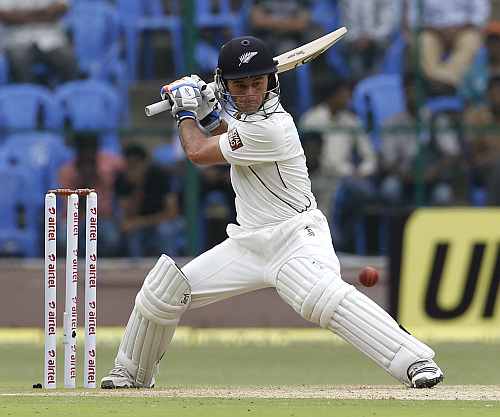 Wyk quickly reached to his fifty in 60 balls with seven fours. He had started slowly, scoring 12 runs in 36 balls.