Sign in  |  Create a Rediffmail account
Rediff.com  » Cricket » Ask The Expert: How many times has a wicket fallen on 111? 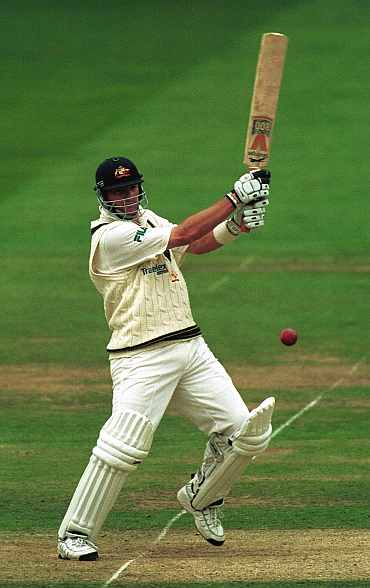 Can you please let me and readers know how many times has a wicket fallen at the magical score of 111 in Test cricket? Rajesh Semwal

Fascinating query, Rajesh! There have been 49 occasions when a batsman has been out on 111. On five occasions the batsman remained unbeaten on this score. Four batsmen -- Arthur Morris, Graeme Wood and Mark Waugh (Australia) and Taufeeq Umar (Pakistan) suffered this fate twice.

India's Sachin Tendulkar and Rahul Dravid also had two such scores against their names, including one unbeaten instance.

As far as fall of wickets are concerned, 189 times a wicket has fallen at the score of 111. The innings-wise break-up: 59 times in first innings, 53 times in second innings, 47 times in third innings and 30 times in fourth innings.

Why was Tendulkar's name missing? 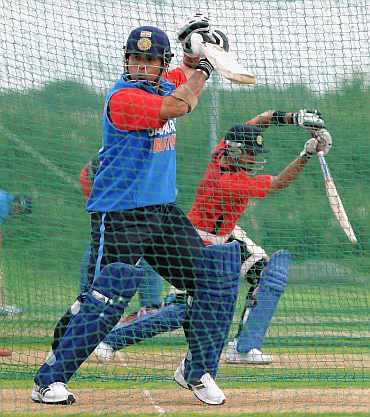 An update to last week's column: Various emails have poured in about Sachin Tendulkar not being included in the list of players missing their centuries because of a declaration by the captain, though he had made 194 against Pakistan at Multan in 2003-04, when skipper Rahul Dravid declared the innings.

This is because the reader's query specifically asked for instances between 90 and 99. Sachin was the second batsman to miss out on a double century because of the captain's declaration. The first batsman to suffer this fate was West Indies' Frank Worrell, who was unbeaten on 197 against England at Bridgetown in 1959-60, when captain Gerry Alexander declared the innings. England's Peter May's 285 (v West Indies at Birmingham in 1957) is the closest a batsman has come to 300, but missed out because of a declaration. Interestingly, May was captaining the side himself! Javed Miandad's 280 against India at Hyderabad in 1982-83 (when Imran Khan declared the innings) comes second.

Has any bowler taken a split hat-trick? 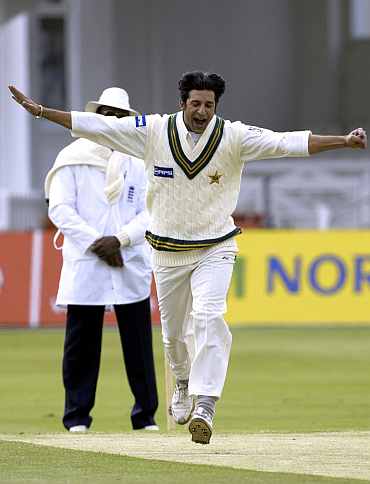 The reply in you last column, about hat-tricks, made me wonder if any bowler has ever taken a split hat-trick (spread over two innings) in Test cricket? Sameer Jain

There have been 39 instances of a bowler taking a hat-trick in Test cricket, with three players -- Jimmy Matthews, Hugh Trumble and Wasim Akram -- performing the feat twice.

A broken hat-trick (spread over two innings) has been seen on three occasions. West Indian Courtney Walsh was the first do so - versus Australia at Brisbane in 1988-89. Walsh dismissed Tony Dodemaid off his last ball in Australia's first innings and then dismissed Mike Veletta and Graeme Wood off his first two balls in Australia's second innings.

The second instance also came in the same series -- at Perth. The bowler was Merv Hughes. This hat-trick was spread over two innings and three overs. Hughes dismissed Curtly Ambrose off last ball of his 36th over in West Indies' first innings. He then dismissed Patrick Patterson off his first ball of 37th over to wrap up the West Indies innings. Hughes completed his extraordinary hat-trick when he dismissed Gordon Greenidge off his first ball in West Indies' second innings.

West Indian Jermaine Lawson was the third bowler to take a broken hat-trick -- vs Australia at Bridgetown in 2002-03. Lawson dismissed Brett Lee and Stuart MacGill off the second and third balls of his 33rd over. Steve Waugh then declared the Australian innings at 605 for nine so that last-man Glenn McGrath would not come to face the hat-trick ball. Lawson, however, joined the elite band, when he trapped opener Justin Langer lbw off his very first ball in Australia's second innings. 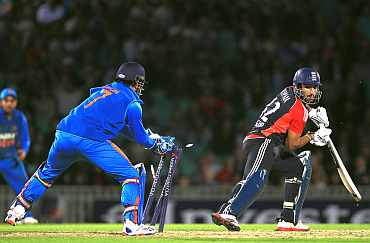 If a team requires one run to win, with one wicket remaining, and the batsman is stumped off a wide ball, what will be the result of the match? Would it be that batting side won by 0 wickets? - Soumyadeep Ghosh

What would be result of the one-day match if a team requires two runs to win with last wicket standing, and one of the batsmen gets out stumped on a wide ball. (If the batsman is declared out then the batting side is left with no wickets and the wide ball will give them one extra run) - Kanhaya Seth

A team needs one run to win with only one wicket remaining. Off the last ball, which is a no-ball, a batsman gets run out. Now what will be the result of the match? - Arun Mittal

The match will end with the batting side winning by one wicket as soon as the ball is declared 'wide' or 'no-ball'. Once the winning target is achieved, any subsequent development like a dismissal that would have been valid in the normal circumstances will not be taken into consideration.

Which batsmen scored exactly 100 in ODIs? 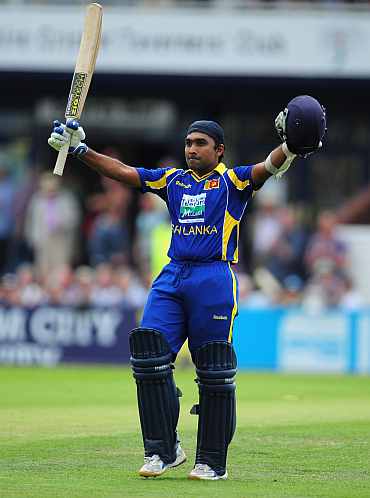 Fifty-five batsmen have scored exactly 100 on 68 occasions in ODIs. Four -- David Boon, Salim Malik, Mahela Jayawardene and Kevin Pietersen -- have done so on two occasions. Pakistan's Mohammad Yousuf and South Africa's Jacques Kallis have registered this score on three occasions each. But it is India's Sachin Tendulkar who has done so on most occasions – six!

When there were no extras in an innings?

Has it ever happened in Tests or ODIs that there were no extras in an innings? - Sumit Barman

In ODIs, there have been two instances when a total of 150+ was achieved without any extras.

South Africa scored 178 for 5 to beat New Zealand at Faisalabad in the 1996 World Cup.

Scotland scored 162 for 5 to beat the Netherlands at Aberdeen in June this year.

There have been eight such instances in Test cricket, with Pakistan's 328 against India at Lahore in 1954-55 being the highest without any extra.

The long and short of Tests 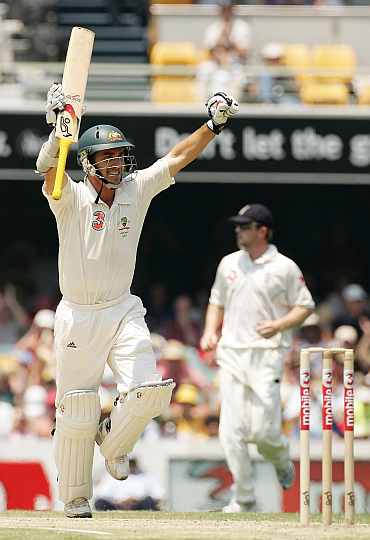 What is the duration of Test matches since 2000? It seems that many Test matches do not last the full five days now. - Parteek Chugh

A total of 528 Tests have been played since January 1, 2000, of which 311 lasted five days, 149 for four days, 63 three days and four lasted just two days. One Test -- the second Test between the West Indies and England at North Sound (Antigua) in February 2009 -- lasted for just 10 minutes before being abandoned because of dangerous pitch.

Only one batsman has suffered this fate in Test annals. Australia's Justin Langer was dismissed for 191 in first innings and 97 in the second innings against Pakistan at Perth in 2004-05.

Four batsmen have been dismissed in the nervous nineties in both innings of a Test. They are Australia's Clem Hill, England's Frank Woolley, West Indies' Gordon Greenidge and Sri Lanka's Mahela Jayawardene.

Greenidge suffered this fate on two occasions. Hill had the scores of 98 & 97 against England at Adelaide in 1901-02 (he was dismissed for 99 in his previous innings!).

More than one triple hundred in the same Test? 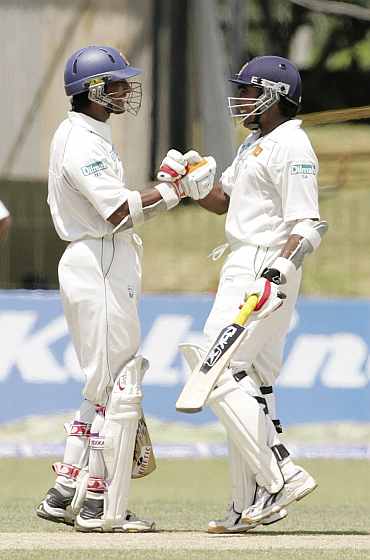 Has there been any instance in Test cricket where more than one triple hundred was scored in the same match? If not, is there any such case for double hundreds? - Arjun Budhraja

Two triple hundreds have not yet been scored in the same Test. The closest one came to witness such an instance was in the Colombo SSC Test between Sri Lanka and South Africa in 2006, when Mahela Jayawardene scored 374 and Kumar Sangakkara scored 287 in Sri Lanka's mammoth total of 756 for five.

On 18 occasions batsmen from opposing sides scored double hundreds in the same match.