Sign in  |  Create a Rediffmail account
Rediff.com  » Cricket » England narrowly ahead of SA in Test rankings after whitewash

England narrowly ahead of SA in Test rankings after whitewash 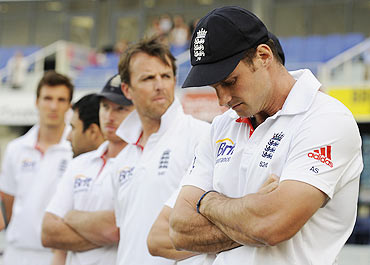 England captain Andrew Strauss said there would be no knee-jerk reaction to the 3-0 series defeat by Pakistan that has seen his team's lead at the top of the Test rankings slashed to one point.

Another disappointing batting performance from England ended in a 71-run defeat in the third and final Test in Dubai on Monday.

Only wicketkeeper Matt Prior averaged more than 30 for the series in which all of England's batsmen struggled for runs.

While they performed admirably with the ball, England only once scored more than 300 in an innings and suffered the ignominy of being dismissed for 72 in the second Test.

"It's going to take a little time for this to all sink in, but we haven't been in the business of panic changes and chopping and changing the side too much and I don't think we'll start now," Strauss said.
Tags: England , Andrew Strauss , Pakistan , Dubai

'This is an eye-opener for us' 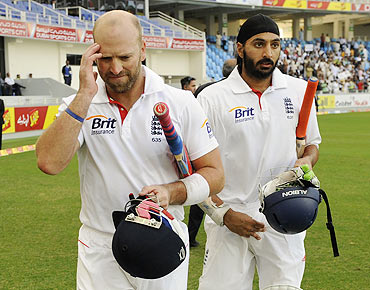 The comprehensive reverse for Strauss's side has left them looking nervously over their shoulders after they plummeted seven points to 118 in the rankings table, narrowly ahead of South Africa in second.

Should the Proteas win all three of their upcoming Tests against New Zealand in March, they will finish top of the standings at the April 1 annual cut off date.

"I've got great faith in our players, but in a way this is an eye-opener for us that things don't get easier they get harder," Strauss added.
Tags: Strauss , South Africa , New Zealand , Proteas

Pakistan within striking distance of India and Australia 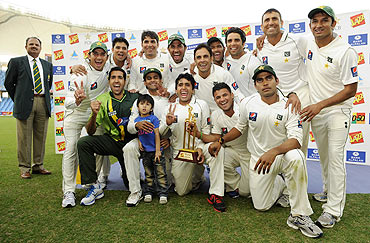 Image: The Pakistan team celebrates with the trophy after winning the third Test and the series against England on Monday
Photographs: Reuters

Pakistan, who remain fifth in the standings, have closed the gap on the sides above them and are now within striking distance of India and Australia.

"I think today is like a dream come true," Pakistan coach Mohsin Khan said. "It's not a very experienced team, not a world beater, but it's a very talented team and I have lot of faith in the captain (Misbah-ul-Haq).

"But we have to perform the same way when we play in Australia, South Africa or England.

"To become number one it's very important you perform all over the cricketing world."